Beat Shazam is one of those TV game shows that you don’t just watch — you can play along at home, using the Shazam app. In fact, the company recently added the ability to sync your gameplay to recorded footage of the show.

Let’s back up a second, for people who haven’t watched: Beat Shazam is hosted by Jamie Foxx and premiered on May 25, on Fox. During each episode, players compete to identify songs as they’re playing, and ultimately go head-to-head against the Shazam app — if they’re faster than the app at identifying songs for a full round, they win the grand prize of $1 million.

Naturally, the company built integrations in the app for people watching Beat Shazam at home, allowing you to play along as you watch. And since Shazam can recognize the audio from TV shows, you don’t need to download a separate app, or even open a specific section of the main app — just Shazam the show and the game should launch.

CTO Richard Sharp said his team has also introduced the ability to “work out exactly what offset you’re watching at to the millisecond.” So if you’ve DVR’d the show, or you’re watching it on-demand through Hulu, you can still Shazam an episode and participate, even if it’s days or weeks after the initial airing. 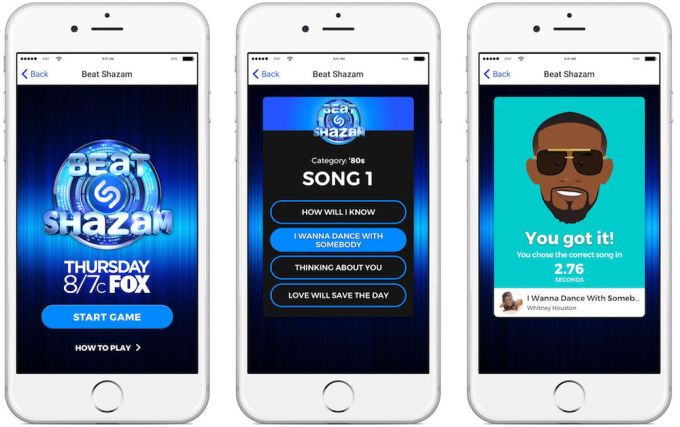 And because the experience is supposed to be carefully sync’d up, it should still feel like you’re playing along with the live show. The app shows you the multiple choice answers, tells you the exact speed with which you responded and lets you know how that compares to the on-air contestants. At the same time, Sharp said, “At the end of the day, you don’t need your phone to tell you whether you got question right or not — you know that from the TV.”

I tested this out myself using YouTube clips of the show. Granted, playing along with brief clips isn’t as fun as a full episode (plus, I’m really bad at identifying songs — just ask my trivia teammates), but it was enough to establish that the syncing really does work.

Are people actually playing this way? Well, Beat Shazam has a significant online/time-shifted audience — the company says that while the show’s same-day viewership is 3.3 million, its total audience is 4.4 million. And the play-at-home experience is leading to what Sharp said is “a record-breaking number of Shazams per user.”

“I think what we’ve learned from Beat Shazam is that very tightly sync’d experiences really deliver to users the same kind of feeling as if they’re actually on the show itself,” Sharp said. Naturally, the company will look for ways to “replicate that in future Shazam for TV campaigns.”