Use a commuter benefits card to take UberPOOL? You might have noticed you have a much longer wait time to get a ride than those using just a regular credit card.

We first received a tip that this might be happening to commuters, so I asked around and found out several other commuter card-carrying friends were experiencing the same thing. This morning I had one of these friends test it out and send me screenshots. The wait using his commuter benefits card to pay for UberPOOL was 25 minutes. However, when he switched it to his regular credit card, the wait went down to 5 minutes. Huge difference!

He repeated the experiment and found, once again, his commuter benefits ride was going to take 15 minutes to pick him up, but another type of payment for the ride would take him 6 minutes. 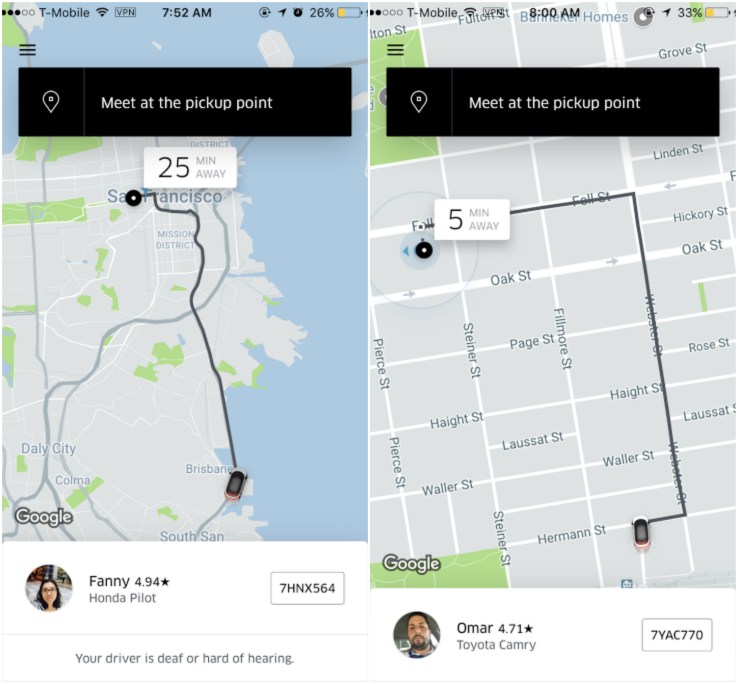 Also, notice in the image his driver from the first commuter card ride had to trek all the way in from Brisbane. The driver from his second attempt would have to drive all the way across town. But the regular card driver was just a few blocks away.

This doesn’t make sense from a cost perspective for Uber to favor regular payment over commuter benefits. Commuters are paying the same either way. So, why would Uber do this to the good commuters of San Francisco?

According to Uber, it’s a tax thing. The federal tax code allows the use of tax-free dollars to go toward commuter benefits. However, those benefits can only be used in van pools (shared rides) that seat six or more passengers. And, because not every UberPOOL driver can hold up to six people, the number of drivers available to take passengers from point A to B using those commuter benefits is limited.

The upside is you get to use pre-tax dollars to take an Uber to work, just like you would take public transportation. The downside is it might take you a lot longer to get there. But, as an Uber spokesperson pointed out, “It’s a big step forward that people can now use commuter benefits to cover the cost of their UberPOOL rides.”

Uber doesn’t have a plan to beef up the minivan drivers just yet. Though it said it is “something we’re thinking about.” So, until then, you’ll just have to request your ride using your commuter benefits card first and then put on your shoes, gather your stuff for work and do a few other things around the house before heading out to get your ride.