Egnyte had a big milestone last week. It turned 10 years old, which is a pretty big deal for a startup. The company has survived and even thrived, but as it moves into its second decade, it recognizes that it can’t live on file sync and share alone, and today it announced the general availability of a new product called Egnyte Protect.

The product was introduced in Beta last year, but is being made widely available today, and as the name suggests, is designed for any company of any size to protect its most valuable content. Value of course is in the eye of the beholder. It could be sources for a journalist, menu items for a high-end restaurant or code for a software company, but regardless of the form it takes, Isabelle Guis, Chief Strategy Officer at Egnyte, says this tool can protect it.

“We’re at an interesting time from a market and customer adoption standpoint. Look at this whole notion of protecting content in advanced ways. Ten years back the people that cared about this were in highly regulated industries. Now every company cares about this,” Rajesh Ram company co-founder and chief customer officer told TechCrunch.

It works with a combination of a rules engine, templates and keywords. If you’re wondering if machine learning comes into play, it doesn’t yet, but Guis says they are working on it and will be updating the application when it’s ready.

The beauty of Protect is that it’s delivered as a service, and while Guis says it’s fairly simple to implement it, she means compared to traditional data protection tools, which typically require a software/hardware combination to work — and to this point have typically been installed in larger enterprise settings.

But being easier doesn’t mean there isn’t some work involved. You still have to determine which data you consider most sensitive, then you have to set up rules, test it by scanning against your content repositories, rinsing and repeating until you get tuned correctly. In reality, it is probably an ongoing process. 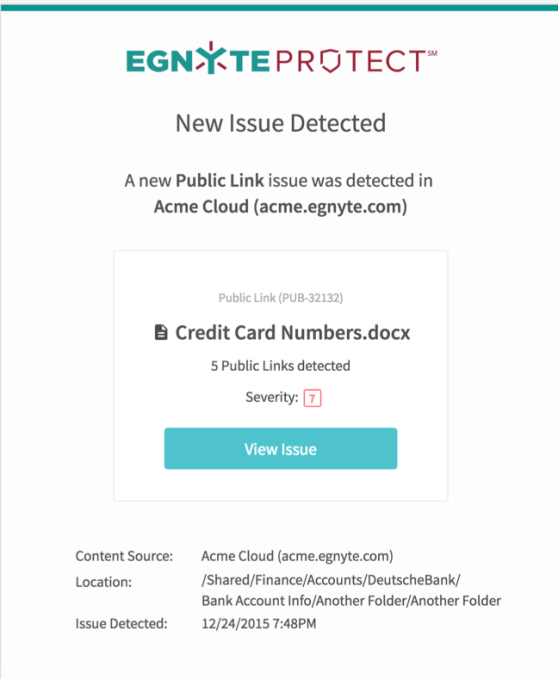 Egnyte displays a message like this when an issue is found that violates usage rules. Photo: Egnyte

And once you identify problem areas, you have to decide what to do. Do you cut off access to those folders? Do you warn the users? Whatever you do, the tool enables companies to at least put a process in place to protect sensitive content, and it puts this capability in reach of organizations, regardless of size.

For now it works with Windows file shares, Sharepoint on-prem and of course Egnyte Connect. Sharepoint online (aka Office 365) and OneDrive are on the near-term road map. Dropbox and Box are further down the road.

Like many companies today, Egnyte recognizes there is value in the data they generate simply by the act of doing business. This data gives them insight into the files and data that move through their systems or those of other providers. They can analyze this data and begin to pull out content that meets certain criteria to give it special protection. They could use this same data for other services such as data retention as an example — and the company intends to continue to focus on this information to expand its content management vision and provide additional services across the platform over time.