People often use the term “time machine model” in Japan. It refers to the lag with Silicon Valley when it comes to startups and innovation. Whenever there is a Silicon Valley darling that raises money from top-tier venture capitalists, there tend to be copycats that emerge locally. This phenomenon is certainly not unique to Japan. Rocket Internet in Germany literally made copying its core competency, and built copycats all over the world.

When a time machine model gains momentum locally, usually it means war. Multiple players emerge aiming to win the largest share of the pie. And the number one and number two raise millions to do just that. The most notable recent example of this is the war of the news apps.

In 2010, a news app called Flipboard was launched in the United States. Its beautiful design, attention to detail and intuitive “flipping” user interface sent it to the top of the charts on the App Store. It was a huge hit, and kicked off a boom in news apps.

It wasn’t until 2012 that this boom came to Japan, when two important news apps were founded in Japan: Smartnews and Gunosy. They both went on to raise tens of millions, which is significant for the local ecosystem. I still remember seeing the decks for their biggest rounds in 2014, and how competitive this seemingly winner-take-all market felt. The money was for war chests, and you could see the signs of war everywhere. They weren’t just online: Gunosy spent millions on train ads and television slots to make sure “Gunosy” was what came to mind when you wanted your daily news binge. They eventually went public in 2015.

Now there is a similar war brewing in Japan. This time it is for mobile P2P payments. A few players are vying to become the Japanese equivalent of Venmo, a company founded eight years ago in the United States and now owned by PayPal. The local equivalents are Anypay, Kyash, LINE Pay and, to a certain extent, Yoropay. What makes this war particularly interesting is how similar it is to the news app war. So much so that Anypay was even founded by the former CEO of Gunosy, Shinji Kimura. His playbook is almost identical:

Both Anypay and Kyash have already assembled their war chests. Shinji Kimura has already played his advertising card of choice by spending big on television commercials. It feels like history is repeating itself.

Time will tell who will win this one, but I sense that this will be a particularly important war. P2P payments is a razor-thin-margin business, and by itself is not a very interesting one — until you get to an enormous scale. However, capturing the rise of mobile P2P payments is going to be critical for the banks. If customers are opting to make payments on a third-party service rather than through their traditional bank, the line for what is and is not a bank will eventually blur. It is foreseeable that a slew of banking products could be offered through an app that you use to send and receive money the most often.

If the traditional banks don’t move quickly to innovate, hundreds of startups will eat their lunch.

Although Venmo was started almost a decade ago, mobile P2P payments hasn’t truly picked up in the United States until just recently. Only 11 percent of Americans used their phones to pay people back in 2016. However, growth among the leading players has been spectacular. Venmo processed $17.6 billion in 2016, up from $7.5 billion in 2015. JP Morgan Chase’s QuickPay processed $28 billion, up from $21 billion over the same period. It feels inevitable that a similar trend will eventually happen in Japan.

What makes the United States and Japan particularly different is the speed at which the largest banks have had to move to provide painless online experiences. In the United States, competition is fierce. If the traditional banks don’t move quickly to innovate, hundreds of startups will eat their lunch. That hasn’t been the case in Japan, where there haven’t been that many formidable fintech startups until now. This dynamic truly shows when you look at the App Store ratings for the largest banks in each country. 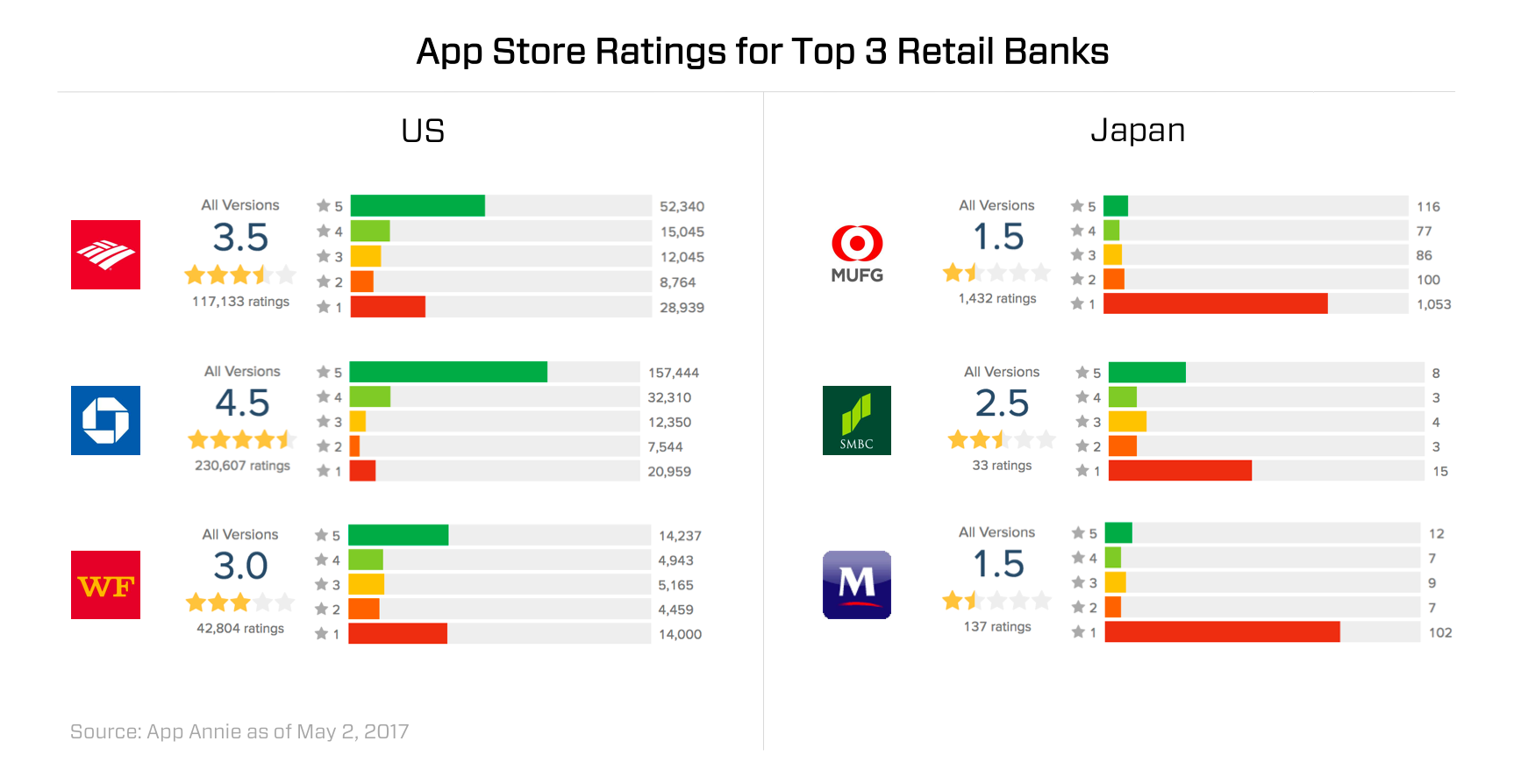 The future of financial services in Japan could unfold in several ways. Anypay, Kyash and other startups could continue to innovate and provide seamless financial services on par with what is available in the United States. Eventually, they could grow so big that the banks can no longer ignore them. The banks would have to completely reinvent themselves to provide better online services. However, by that time, it could be too late. They probably won’t have the human resources to deliver products for the digital age — in which case, they may have to acquire these startups, and acquire at a high price.

Alternatively, they could act now. They could make it a top priority to provide better online experiences. They could start hiring more talent that know how to build consumer-focused technology products. It would be difficult, but it wouldn’t be too late.

In any case, I for one am looking forward to the increased competition for financial services in Japan — it means better experiences for consumers like us.