In April, Google introduced a revamped, reimagined version of Google Earth, which included a number of new features that go beyond visualizing the planet through the use of maps and satellite imagery, to also allow users to explore the world through tours, and learn about its many wonders. Today, Google announced it’s bringing Google Earth to the classroom.

The new version of Google Earth introduced a feature called Voyager, offering a showcase of guided tours from scientists, nonprofits, and other storytellers and organizations. The tours let you explore a region or multiple locales, through the use of photos, 360-degree videos, and Google Maps Street View, along with text. At launch, there were tours from groups like BBC Earth, Jane Goodall, Sesame Street, and NASA available.

At the ISTE (International Society for Technology in Education) conference, Google today announced it’s expanding its lineup of tours to include 10 new stories, specifically designed for educational use. Partners on this new effort include National Geographic Society, PBS Education, HHMI Biointeractive and Mission Blue. 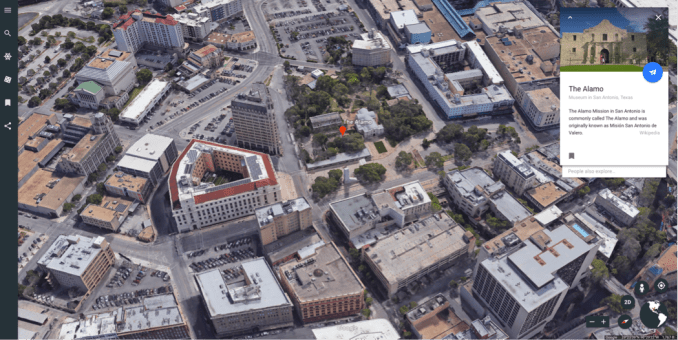 These stories will allow students to explore the world using Google Earth in the classroom, says Google, by visiting remote places like the Costa Rican Thermal Dome or by venturing with Lewis & Clark, for example. Beyond the tours themselves, Google is also introducing lesson plans and other activities for teachers to help better guide their classroom use.

In addition, Google Earth this week is being added as a service to Google for Education, which means I.T. admins can now manage the product through the Google Admin panel.

The Google Earth Voyager updates were announced today along with other new educational tools, including a collection of STEM tools for Chromebooks (Dremel 3D40 3D Printer and littleBits Code Kit) which schools can purchase as a discounted bundle, as well as a self-guided mode in the Expeditions app for Cardboard and Daydream that will allow students and teachers to pick any of the over 600 virtual field trips the app offers on their own.