Over the past few months, CSAIL’s (MIT Computer Science and Artificial Intelligence Laboratory) self-driving wheelchair has become a familiar sight around the MIT halls. It’s a nice little rolling advertisement for the lab’s work — and more importantly, it’s a great opportunity to test the mobility device in a real world setting. As students wander by in groups, deep in conversation or face down in their smartphones, their paths are unpredictable and collisions are a very real possibility.

This kind of real world testing is exactly why the chair exists in the first place. It’s hard to test autonomous cars in out on the streets. It turns out there’s a lot of red tape involved when it comes to trying out driverless technology in the real world — particularly in a densely populated city like Boston.

Nearby military bases have popped up on the list of possible locations, but in the meantime, the school needed ways to try out their ideas before scaling them up to two ton pieces of rolling metal. The wheelchair serves as a good middle ground between real and remote control cars, letting researchers iterate more quickly on their ideas. The fact that the product could have real world applications for people with mobility issues is something of a happy coincidence.

“The current research that’s being done is using it more as a platform, but there are people who are discussing doing research specifically on the chair,” says Thomas Balch, an MIT robotics software engineer. “A lot of the research I’ve seen people doing since I’ve been [at CSAIL] has been focused on helping people with disabilities deal with things more easily.”

The chair feature the same LIDAR scanners the school is using on their full-sized cars, along with a mapping technology CSAIL developed way back in 2010 for use on the streets of Singapore, long before autonomy became the buzz word it is today. That system, mounted on top of the wheelchair, creates a 3D map of the fixed points around it — in this case, the irregularly-spaced walls of the Frank Geary-designed Stata Center. A smaller scanner up front, meanwhile, detects obstacles in its way.

Balch and MIT research assistant Felix Naser offer me a quick ride around the Stata lobby on the wheelchair — not exactly the campus tour I was expecting. First, they map the path, using a joystick and the 3D mapping tech up top. It’s nothing too exciting — just a straight shot from one side of the building to the other. Once traced, the path is visible as a color line on a large tablet mounted on one of the arm rests. The walls are a solid black, and feet show up as small multi-colored dots. The birds-eye view of the room isn’t exactly complex, but it does the trick. 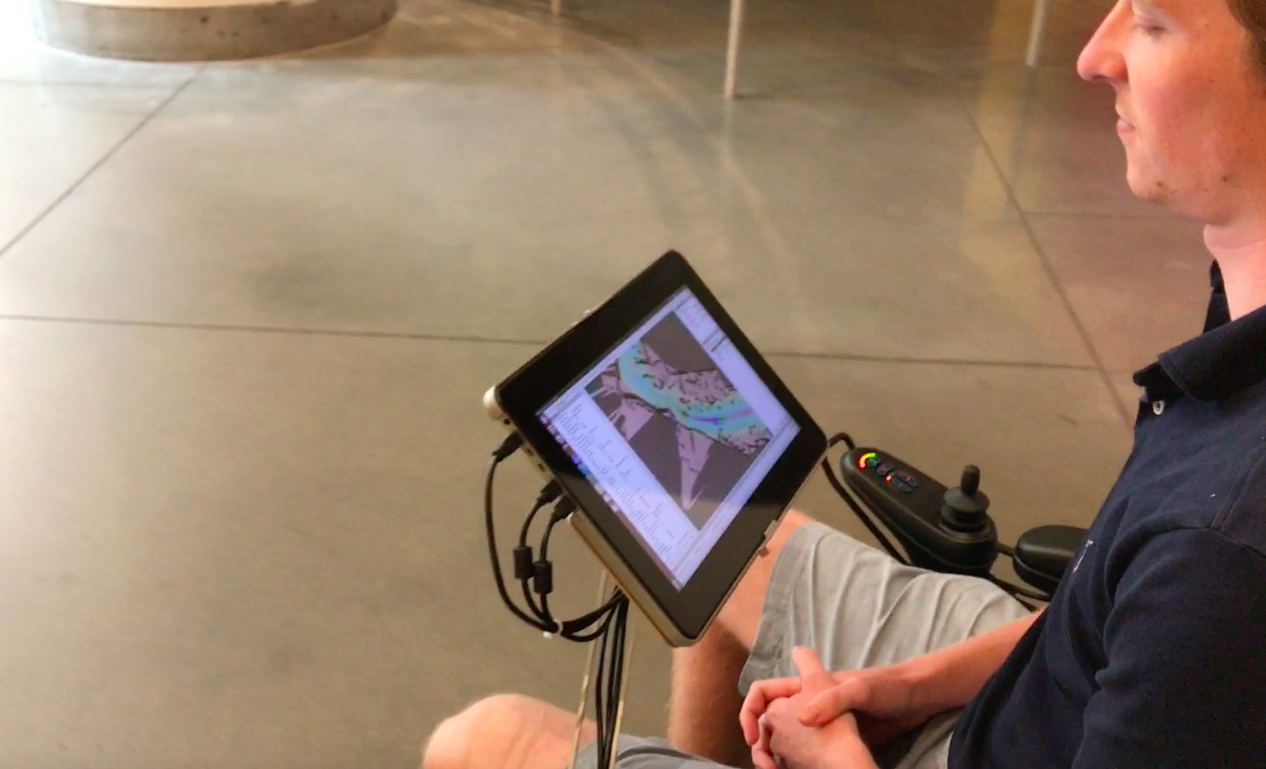 The ride is slow and smooth — as you’d hope from an electric wheelchair. When the system detects a person, it slowly comes to a full stop, readjusts its position and drives around the person in its way. The process took around 10 to 15 seconds. If anything, the system is probably overly cautious at this point, stopping any time someone passes in its periphery. An abundance of caution is a fine quality in a wheelchair, but in this case, probably not something you want in a car.

For added protection, Balch follows close behind with an Xbox controller in-hand, serving as an emergency brake. It’s a reminder of how much work needs to be done, even at this slow speed, before researchers are comfortable letting these vehicles cruise without any kind of human pilot providing backup. But low-speed, low-impact settings like this are a much safer place to work out some of those bugs.

Once perfected, however, the system could one day be deployed in busy hospitals to help transport patients across the floor. The school has been in talks with hospitals around the world about potential pilot programs, but as of yet, this branch of CSAIL’s self-driving car research has yet to yield real world commercial application.