Earlier this week, GDAX, the digital currency exchange run by Coinbase, experienced a flash crash in its USD – Ethereum market.

Within seconds the price of ETH crashed from ~$320 to as low as $0.10. While the price recovered quickly, the rapid price movement caused many traders to experience margin calls or stop loss orders, resulting in potentially severe losses.

While many initially thought the flash crash was the result of nefarious work, GDAX eventually confirmed that there was no indication of wrongdoing or account takeover.

Instead, the flash crash was the result of someone placing a multi-million-dollar sell order at market price, meaning ETH would change hands at whatever price bidders were currently offering until the entire order was filled – no matter how much lower the price was than the current price of ETH.

Filling this order caused ETH prices to instantly slip 30% to $224 – which in turn caused 800 stop loss orders and margin liquidations, which further drove the price down, to as low at $0.10.

Typically, someone placing a large sell order would liquidate their position over time to minimize the downward effect on price. Also, GDAX reminds users who are about to initiate large sell orders that it will cause slippage in the market, meaning this trader most likely didn’t care (or didn’t understand) that his trade would move the market. 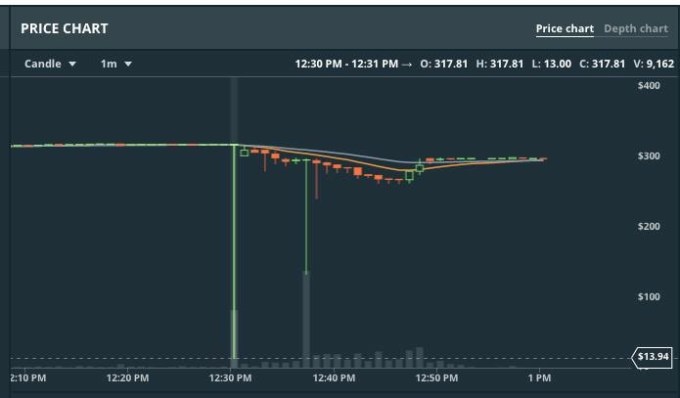 For anyone not familiar with trading and exchanges, a stop loss order is an order to sell stock (or cryptocurrency) when the price drops to a certain level. It’s basically used as a way to cut your losses.

Additionally, a margin funding liquidation is when you borrow funds to go long and bet that an asset will rise in price, and if the price instead drops, your position may be automatically closed to reimburse the party that lent you the money to go long. Both of these types of trades require assets to be sold, which further drives down the price.

Originally GDAX said that they would be honoring all of these orders, since the trades were legitimate and in accordance with their trading rules.

However, yesterday they announced that the exchange will be using company funds to reimburse customers who suffered losses as the result of a margin call or stop loss order executed.

“We will establish a process to credit customer accounts which experienced a margin call or stop loss order executed on the GDAX ETH-USD order book as a direct result of the rapid price movement at 12.30pm PT on June 21, 2017. This process will allow affected customers to restore the value of their ETH-USD account to the equivalent value of their ETH-USD account at the moment prior to the rapid price movement.” – GDAX

Notably the won’t be reversing any trades, meaning if you were “lucky” enough to buy ETH at a low price during the flash crash, that trade will be honored.

This is more of a sign of goodwill than an admission of any wrongdoing. GDAX’s exchange performed just the way it was supposed to – and the same way a market like the NYSE would function if a proportionally large market sell order was placed.

If anything, this should be a reminder to traders how risky it can be to trade on margin, and that cryptocurrency markets can be just as unforgiving (and sometimes more) as other equity markets.