Augmented writing startup Textio has quickly grown to help major Fortune 500 companies like Cisco and Johnson & Johnson to recruit better talent. With a platform that helps recruiters to improve the content of their postings, the company has shown that small tweaks in the language can make a big difference in response rates and the quality of applicants that apply.

Textio was founded by Kieran Snyder and Jensen Harris, two former Microsofties who decided to collaborate on a tool to change the way businesses used language. According to Snyder, had previously worked in areas of the Microsoft productivity suite and wanted to make a contribution to the way companies communicated.

The result is what they like to call an “augmented writing” platform. The idea is that users would be able to get data-driven feedback on their text and know how it would perform with a particular audience. As a result, they would be able to improve their communications and receive a more favorable response.

(Note: As someone who strings words together for a living, knowing there is a computer out there that can do this better gives me extreme anxiety and makes me not even want to write about this damn thing, for fear more people will adopt it and I will soon become obsolete.) 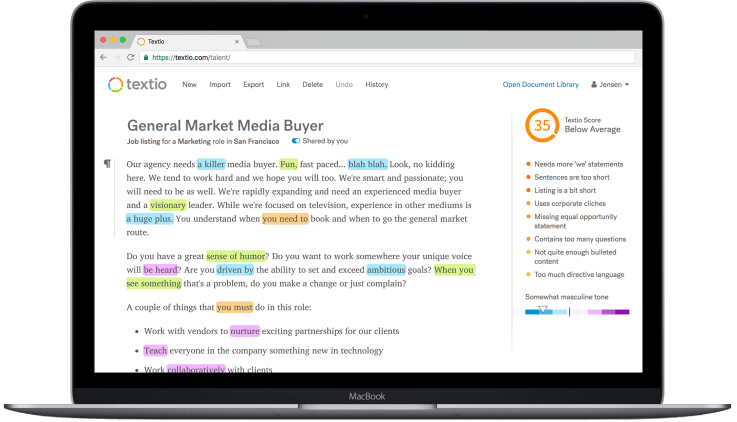 The first application of Textio’s technology was in talent acquisition, an area where customers could submit draft job postings and get feedback on how well those postings would perform. In addition to being a huge market, talent acquisition also provided measurable validation of the company’s tech — that is, it could easily show “augmented” postings received more responses and led to the hiring of more qualified candidates.

But Textio believes its tech can be applied in other enterprise applications, and that’s where the funding comes in. The company expects to expand into other areas where organizations communicate with customers, partners and potential employees.

As part of the financing, Scale partner Stacey Bishop is joining the company’s board. As investors in marketing automation company Hubspot, Scale and Bishop could bring some expertise in how businesses approach sales and marketing communications, among other things.

“We want to extend this platform into other types of business writing,” Snyder told me. “There are so many rich possibilities.”