As Amazon and Walmart continue their battle to become the world’s largest retailer, another longtime rival in the e-commerce business, eBay, is now stepping up its game as well. The company this morning announced a new Price Match Guarantee for over 50,000 items across its site – promising that it will have the best deal online, or it will match the lowest price of a competitor.

The move is a significant effort on eBay’s part to ensure that it doesn’t lose customers to Amazon, Walmart and other online stores as the market consolidates behind the industry’s major players.

However, only select items are available for this Price Match Guarantee, eBay says.

In order to qualify, the item must be one of the new, unopened items sold daily through eBay Deals, for starters. Deals are eBay’s selection of “trending” inventory across all its categories – like consumer electronics, home & garden, and fashion. The deals are also generally offered at 20 percent to 90 percent off, and are sourced from over 900 of eBay’s trusted sellers.

These sellers include both smaller merchants looking to grow their customer base as well as major consumer brands. At any time, eBay says there are “tens of thousands” of items offered through the Deals site, with featured deals updating at least once per day, beginning at 8 AM PT. 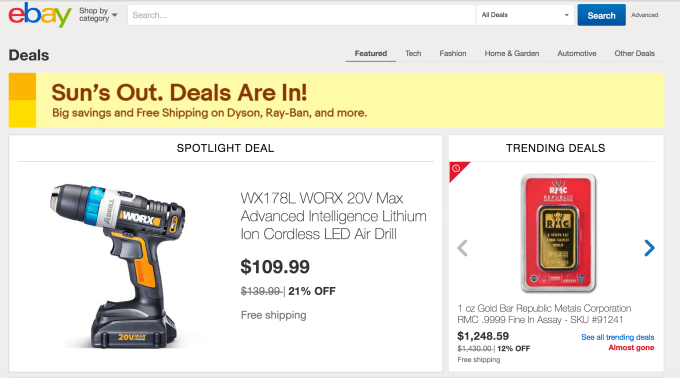 In case you somehow missed how this launch is a response to the looming Amazon threat, eBay’s announcement about the new price match feature hits you over the head with the comparison: it makes special note of the fact that there’s “no membership required” to access eBay Deals. (Memberships? Hmmm…Now who could that be referring to?)

This isn’t eBay’s first attempt at challenging Amazon. In March, the company announced it was rolling out 3-day “Guaranteed Delivery” on 20 million items across its site. If the items didn’t arrive in time, eBay said it would refund the shipping cost. Or, if items already shipped for free – as 67 percent of eBay’s transactions today do – eBay said it would give the buyer a coupon towards their next purchase. 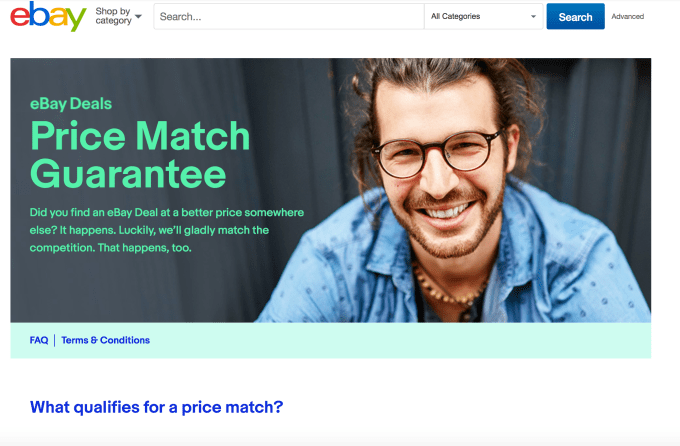 As for the new Price Match Guarantee, there are a few caveats – though nothing too unexpected.

Ebay says it will only match prices on identical items sold online on a competitor’s website – and yes, the item must be currently in stock at the time you request the Price Match Guarantee.

The company says it will match the prices of some of the largest online retailers, including Amazon, Walmart, Jet.com (also Walmart), Home Depot, Sears, Target, Best Buy, and Wayfair.

To request a price match, consumers have to dial eBay customer service in advance of their purchase to get a coupon for the difference to be used at checkout. The coupon expires in 24 hours.

“Shoppers can shop with confidence knowing that they’re getting the best value available on eBay,” said Hal Lawton, Senior Vice President of North America at eBay, in a statement. “Our eBay Deals selection has grown exponentially since being launched in 2011. The prices are already extremely competitive, but if a shopper finds it for less, we’ll gladly match the price of our competitors,” he added.

The move may also help attract new shoppers who have hung onto the notion that eBay is mainly an auction site. While the company continues to support the format, of course, it’s now fixed price items that account for the majority (87%) of its gross merchandise volume. In addition, 80 percent of all the merchandise sold on eBay is new, with two-thirds delivered within three days, the company notes.

The Price Match Guarantee is only available in the U.S., and is live as of today.