Dictate, a new project from Microsoft’s experimental R&D group, Microsoft Garage, is launching today to offer a way to type using your voice in Office programs including Outlook, Word and PowerPoint. Available as an add-in for Microsoft’s software, Dictate is powered by the same speech recognition technology that Cortana uses in order to convert your speech to text.

This is also same speech recognition and A.I. used in Microsoft Cognitive Services, including Microsoft Translator, the company says in an announcement about the new add-in.

The idea for Dictate emerged from a hackathon project, notes Microsoft, and afterwards was used internally at Microsoft by over 1,500 employees across 40 countries.

Dictate, meanwhile, only works in Office. However, it offers support for a number of commands, like “new line,” “stop dictation,” and “enter,” as well as other punctuation marks and actions. You can also choose to insert your punctuation manually, or allow the software to do it automatically as you speak. 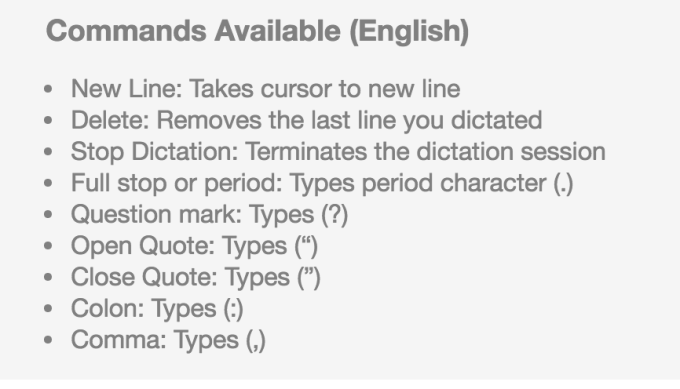 An introductory video posted this morning to YouTube offers a preview of how the software works in Word, PowerPoint, and Outlook.

Once the add-in is installed, a new menu appears in the productivity app’s toolbar, allowing you to click to begin your dictation. In the demo, Dictate was shown handling the nonsense word “Supercalifragilisticexpialidocious,” as well as inputting text in simple email. 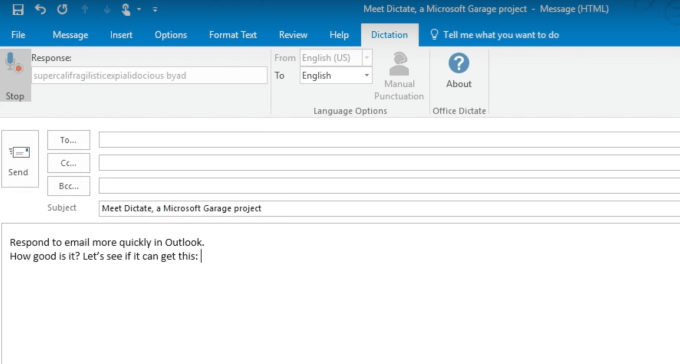 It also at launch supports more than 20 languages for dictation, and can translate in real-time into 60 languages. This is perhaps its most clever trick, as that means you can speak in your language, while Dictate types it out in another. (To what extent this will work well for longer sentences and complex word combinations remains to seen, however.)

Because it’s a Garage project, it may or may not be further developed going forward. (Garage projects aren’t officially supported products, but are rather experiments.) The app is a free download here.