Toy company Hasbro is belatedly entering the subscription service market with today’s launch of Hasbro Gaming Crate – a service that ships a themed box containing three board games to users every three months. The service, which costs $49.99 per crate, offers two options – one designed for adults in search of new party games, and another with games better suited for families.

The company had previously announced its intentions to try its hand at a subscription offering, which it had said would arrive in summer 2017.

It’s not the only company operating in this general space – Kiwi Crate and other startups offer projects and toy selections aimed at families, while Amazon earlier this year launched a service that ships out STEM-themed toys.

Hasbro’s crate, however, is the first from a major toymaker and is exclusively focused on games. It’s also not shipping out classic selections which people – especially those interested in subscription games – may already own, but rather brand-new titles.

At launch, for example, its Family Crate will include a game called “Mask of the Pharaoh,” which is a collaborative, virtual reality game that involves the use of a companion mobile application for iOS and Android. Players in this game use an included VR mask to wander through a pyramid in ancient Egypt, and must describe a section of the pyramid to the other players as a means of advancing on the physical game board. 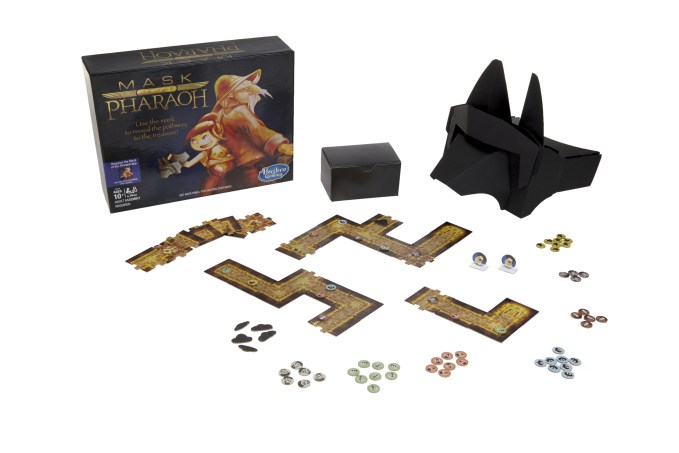 The debut Party Crate, on the other hand, includes an adult-only game called “Speak out: Joe Santagato Edition Game,” where players have to say phrases through a mouthpiece, which may include some NSFW content.

As Fortune noted earlier this year, Hasbro’s games business has been doing well in recent months, with revenue increasing 9 percent to $1.39 billion in 2016, bringing Hasbro’s total revenue to over $5 billion for the first time in its history.

While this new service, on the one hand, is a way for Hasbro to compete in the broader subscription market, it will also give the company early insight into possible hits, allowing it to innovate faster. If players’ feedback is largely positive about one of the crate’s new games, for example, Hasbro may decide to invest in its further distribution.

As Hasbro explains on the new service’s website, the best way to order the games in the crate is to subscribe – they’re not immediately available for sale elsewhere, that is. Over time, however, the games may be sold online through the Hasbro website or in retailers, the FAQ says.

Players are charged every three months for their next shipment of games and can opt to skip up to two shipments in a row, at any time, the company also notes.

The first games will begin shipping this fall only in the U.S., though you can sign up starting today.