Google may have a few VR projects lined up across hardware, but for now one of its biggest selling points for mobile VR is YouTube. Today, YouTube announced that it’s bringing heat map analytics to the service so that 360-degree video producers can see where their viewers are paying attention at any given time.

360-degree video may not be as hyped as it once was, but YouTube has the largest stock of spherical video on the web and it’s one of the easiest places to discover new stuff. For creators, heat maps can offer insights into audience behavior so they can better understand best practices for producing spherical video. 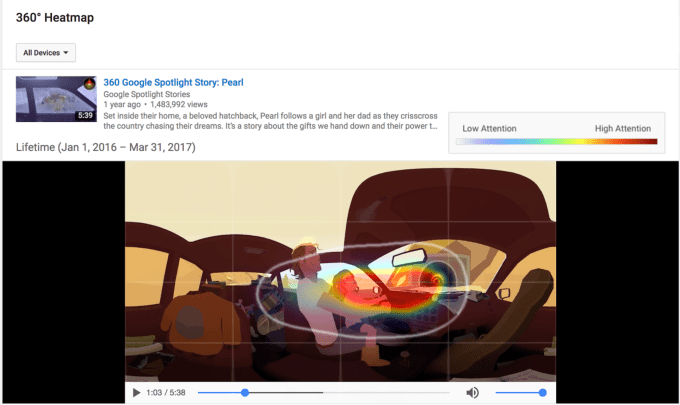 A lot of creators are still having a tough time creating effective 360-degree content. YouTube had some interesting heat map insights to offer, most interestingly that people spend 75% of their time in 360-degree videos looking at the 90-degree slice that’s in front of them. So, while the medium has been pitched as one for discovery, the company advises sticking what’s important right in front of viewers or at least using onscreen cues to direct attention to other areas of the screen.

Though advertisers have yet to really break into 360-degree advertising due to its costliness and VR’s nascent market size, tools like this will definitely give them greater insights into where the eyes of their viewers are. As more VR headsets integrate eye-tracking, something Google has show interest in through its Eyefluence acquisition, insights are only going to get more exact.

In addition to the analytics updates, YouTube also announced that it’s opening applications today for its recently announced VR Creator Lab, which will give enterprising VR video creators a 3-month program in LA and $30k-$40k to help them produce more top notch immersive 360 content.