Sphero continues its partnership with Disney today, with the launch of a new toy based on the Marvel superhero Spider-Man. But where BB-8 and Lightning McQueen could move around the room, Spider-Man is more stationary — his real power involves holding conversations.

The simplest thing this Spider-Man can do is tell jokes — he seems to have an infinite simply of eye-rollers. If you just ask him to chat, he’ll start a conversation about random topics like school or dating. And as Sphero co-founder and Chief Software Architect Adam Wilson put it, he’s also “a storyteller,” describing his adventures to kids and asking them to participate in key moments.

You can see a few of my interactions with Spider-Man in the video above. Users are encouraged to try out different prompts and discover new modes of interaction — though there were plenty of times where Spider-Man would answer a different question from the one I asked, or he would just sit there silently.

The toy includes expressive LCD eyes, a microphone, a speaker and an accelerometer — so he’ll offer enthusiastic commentary if you pick him up and pretend to fight with him. There’s even an infrared sensor, allowing Spider-Man to go into “guard mode,” warning off any intruders who enter his owner’s bedroom. 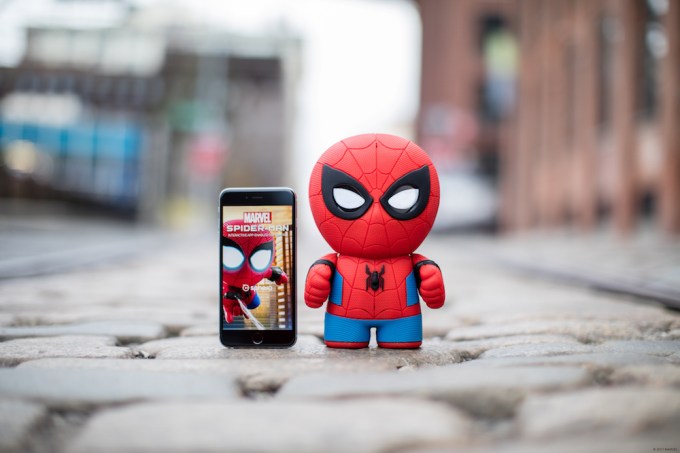 Aside from using third-party speech recognition technology, Wilson said Spider-Man’s conversational engine was built “from scratch” — in essence, he’s “a full Android device” inside a superhero-shaped toy. (While your main interactions will be through voice, you’ll also need either an iOS or an Android app to control him.)

Wilson also emphasized the importance of privacy and security. He said Spider-Man is only listening when the spider on his chest lights up, and the user’s voice is never stored or shared. (The security measures are certified by AppliedTrust.)

It’s worth noting that while Spider-Man’s launch is timed to just a few weeks before the release of Spider-Man: Homecoming on July 7, he isn’t supposed to represent the movie version of the character, and he’s not voiced by Homecoming actor Tom Holland. (The fact that Homecoming will be distributed by Sony Pictures, not Disney, may have something to do with the toy’s lack of movie ties.) Still, Wilson said this Spider-Man comes with more than “100 comic books worth of content” and will also offer “tons of Easter Eggs.”