Update: It happened! Snap fell down to its IPO price (for a few seconds) of $17 per share after its continued steady march south over the past several weeks. The company is now barely holding just above its IPO price.

Snap’s last earnings report resulted in a disaster, and while the company still managed to stay above $20 for an extended period of time, a string of bad days for the market — and likely increased skepticism for the company’s future among the rest of the bundle of growth stocks — is putting increased pressure on its price. There have been a slew of smaller IPOs since Snap as more and more companies try to get out the gate, but especially for non-traditional ad-driven companies (looking at Pinterest, for example), it may affect the future of the so-called IPO window being “open.”

We’re going to get another heat check on investor appetite in the next few weeks with Blue Apron, which filed to go public earlier this month. Like Snap, Blue Apron — a meal delivery service that’s as much a consumer service as it is a complex logistical operation — showed a growing business while logging a major loss in the most recent quarter. But Blue Apron also showed it at least has the capability of being profitable, with a $3 million profit in the first quarter last year. 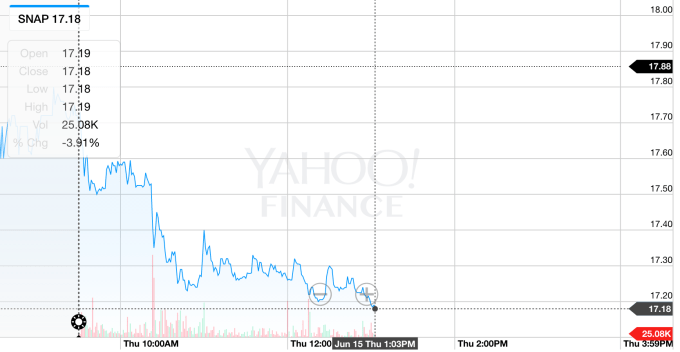 This major decline might not be something that’s wrong on an absolute basis, since $17 is the price that Snap selected as a company going public. But these prices are set to raise as much money as they can while ensuring a “pop” of around 20% or more, making sure investors have an opportunity to lock in some gains. So, for the most part, we can call Snap’s IPO a “success” given its pop, even though the company’s shares have come crashing down to earth. It’s not great for the rest of the people that got into Snap, and it certainly isn’t good for the perception of the company as a potential growth stock like the traditional FANG (Facebook, Amazon, Netflix and Google) bundle.

There are some implications for Snap’s stock decline — namely, a lower stock price can make it harder to attract talent because compensation packages tied to those prices start to become less valuable. Snap faces competition from other networks like Facebook, which is increasingly copying Snap’s portfolio of features and products. Imitation is the sincerest form of flattery, but for a company that is trying to pitch to advertisers that it’s a unique prospect with high engagement, having a massive company with resources and a known ad product can make life increasingly difficult.

The stock continuing to tumble further below $17 is, of course, a Very Bad Sign — both for Snap and companies trying to offer new kinds of advertising pitches beyond Facebook and Google. But it did make a quick rebound after hitting $17 for a very brief moment in time. The market in general has had a bad few days, so we’ll see how this kind of behavior lasts.