Microsoft announced today it will retire its older file-sharing site Docs.com on December 15, 2017, as a result of its LinkedIn acquisition. With LinkedIn, Microsoft also gained access to SlideShare, a top file-sharing network on the web – and one’s that’s now far more heavily used than Microsoft’s own Docs.com.

SlideShare “represents the ideal platform for publishing your Word, PowerPoint, and PDF content with its audience of 70 million professionals, and vast content library,” wrote Microsoft, in a message posted to users on the Microsoft Office website.

The shutdown was first spotted by ZDNet.

Docs.com was launched in 2010 in collaboration with Facebook, at a time when Microsoft was hoping to leverage the social network’s wide reach to grow its Microsoft Office Web Apps service. It was effectively an effort to get ahead of the then rapidly growing threat of Google Docs by jumping on the back of a more popular social network to give it a jump start.

The service itself was created by Microsoft Research’s FUSE Labs, with the hopes that Facebook users would add documents to their Facebook profile or share posts containing files, as easily as they would post photos or video. 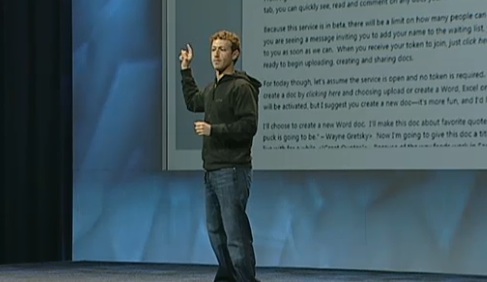 Above: a younger Mark Zuckerberg introducing Docs.com at Facebook’s F8 conference in 2010

In 2015, the site was redesigned to be a place where users could post their Word, Excel, PowerPoint, and PDF files in addition to Microsoft’s newer file format, Sway, and make those discoverable to search engines.

Docs.com supported both public and private sharing of the files, and you could invite others to help you edit your files before making the available to the wider web.

However, Microsoft now has other services that can take the place of Docs.com following its closure, including OneDrive and SlideShare.

The process of closing the site entirely will take several months, allowing users plenty of time to make the transition.

The company also advises users to back up their files to OneDrive by signing in to Docs.com with your existing account, then making the transfer anytime between now and December 14, 2017. (Microsoft will automate the transfer on your behalf). This will render your Docs.com account read-only after the process completes.

Office 365 Administrators can migrate your files for you if you’re using Docs.com with a Work or School account, as of June 19th.

Microsoft will also allow Docs.com share links to work for some time after the service’s closure. Until May 18, 2018, any links to Docs.com content you’ve previously shared with others that have been automatically redirected to your OneDrive or OneDrive for Business account will stop working.

In addition, Microsoft explains why it’s automating the transition of files from Docs.com to OneDrive, instead of to SlideShare – even though SlideShare is the reason it cited for the service’s closure. The company says that SlideShare is for public posting, and users should be able to “purposefully manage” which files they want to publish there, “while also adding their own structure, titles, and descriptions to their content.”

A more detailed FAQ on how the transition may affect you is available here.