Pandora today is rolling out a new feature to its Premium tier that will allow subscribers to continue to listen to music, uninterrupted, when their current track, album or playlist ends. Called, simply, “AutoPlay,” the feature works by shifting users to a personalized radio station based on whatever it is you were listening to before.

AutoPlay — a feature carried over from Rdio, which was bought by Pandora in 2015 for $75 million — was said to be in the works when Pandora first launched its Spotify competitor in March of this year.

It’s now available to both iOS and Android users, and can be toggled on while listening to music or managed from the app’s Settings.

Pandora says the feature could be particularly useful in certain scenarios — like when you’re working out at the gym and don’t have time to fiddle with your music, or when you’re hosting a party but don’t want to stop your conversations to play DJ, for example.

But as Variety notes, AutoPlay has another advantage, as well. Because radio streaming has different rights associated with it compared with on-demand listening, Pandora can leverage the new feature to work around the problem with music exclusives that launch on rivals like Apple Music, Tidal or Spotify. 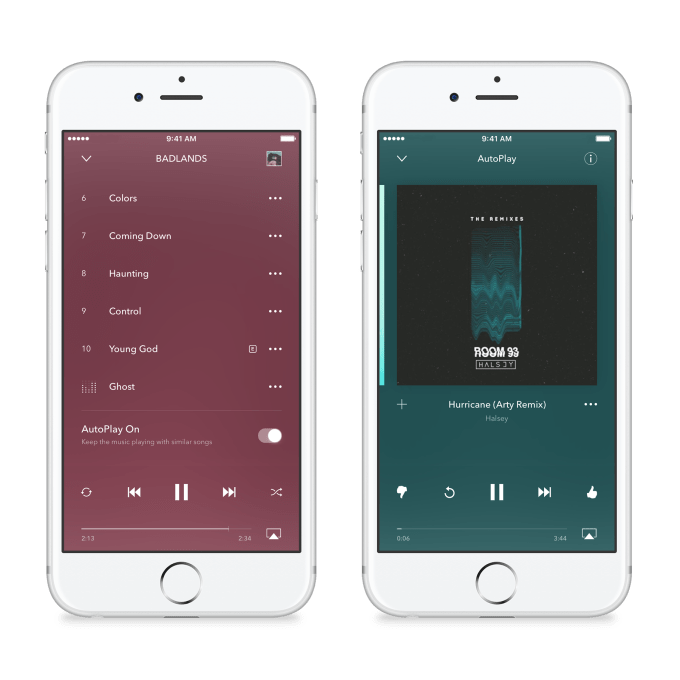 For example, the report said, Taylor Swift’s “1989” album can only be listened to on demand on Apple Music, while Pandora users can only play her prior album “Red” on demand. But if they switch on AutoPlay, when “Red” ends, it’s likely that Pandora will start mixing in tracks from “1989” — which it is able to play through its radio service.

The news of AutoPlay’s launch arrives alongside other news related to Pandora’s agreement with private equity firm KKR. In May, KKR had agreed to buy $150 million in Series A preferred Pandora shares in a month’s time, and be paid a 7.5 percent or 8 percent quarterly dividend, while also taking a board seat. The cash was intended to help Pandora regain its footing in today’s music market, which now heavily favors newer, on-demand services.

However, while that investment is cleared to close, Pandora announced today that it and KKR have agreed to an extension of their earlier agreement. The extension will allow Pandora to instead explore interest expressed by a “strategic investor” who wants to make a “substantial minority investment in the company,” a brief announcement from Pandora explains.

That investor is Sirius XM, according to both Reuters and CNBC sources, though Pandora hasn’t confirmed.

Sirius XM had previously been negotiating with Pandora to acquire the company in its entirety, but couldn’t get a deal done due to disagreements over price, the reports say. It’s unclear for now what Sirius XM’s terms for this new investment would be, or if the deal will go through.

But because Pandora passed its June 8 deadline for finding a buyer or taking the funds from KKR, Pandora’s stock tanked today, hitting its lowest point in more than a year. The sell-off could make Pandora more of an acquisition target.

While the drama surrounding Pandora’s future continues, the company did today release numbers that seem to indicate those testing Pandora’s Premium tier are at least enjoying its features.

According to Pandora, nearly 60 percent of trials are from those under the age of 35, and their favorite feature is the personalized “My Thumbs Up” playlist. As their trials continue, users launch Pandora more often — over half listen more than six days per week, and listening hours increase more than 30 percent during their trial.

In addition, 97 percent of Premium users are listening to a playlist Pandora created for them via “My Thumbs Up” or “Linked” playlists, and listeners have kept 86 percent of songs from the “Add Similar Songs” feature on their playlists, Pandora says.

Plus, as Barron’s noted, Pandora CEO Tim Westergren said at a music conference Tuesday that Pandora accounts for 40 percent of music listening on Amazon Echo and 50 percent on Sonos speakers.