Microsoft today is launching a completely revamped version of its Skype application, with a new set of features that draw obvious inspiration from messaging rivals, like Messenger and Snapchat. Yes, that means Skype now has its own Stories-like feature, which it’s calling Highlights, as well as a redesign that puts the camera only a swipe away from your chats, among other things.

The company says Skype’s makeover has been in the works for well over a year, and represents the biggest change to the platform since the introduction of video sharing back in 2006. In other words, it’s not necessarily a fast-follow cloning attempt built in response to the Snapchat threat, )and Facebook’s copying of Snapchat across its platforms), but rather something Skype has been working on for a longer period of time. 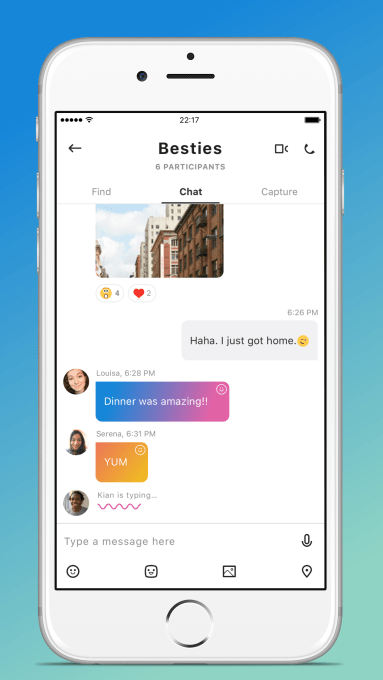 “If social networks have given you the stage on which to perform your life, the new Skype gives you the additional equivalent of the local coffeehouse or corner pub, where you meet people on a daily basis to deepen your relationships,” explains Amritansh Raghav, Corporate Vice President of Skype, about the new design’s focus on enhancing users’ real social connections. “We call that set of interactions your personal network,” he says.

The idea with the revamp is to make Skype a better tool for the sort of communication and sharing that takes place among members of Skype’s more closely connected network, which often includes family and friends. That means Skype is tacking on ephemeral sharing as part of its feature set, along with Stories, and other camera-first inspired features.

It’s also today rolling out its own set of bots and chat add-ins to rival Facebook Messenger. 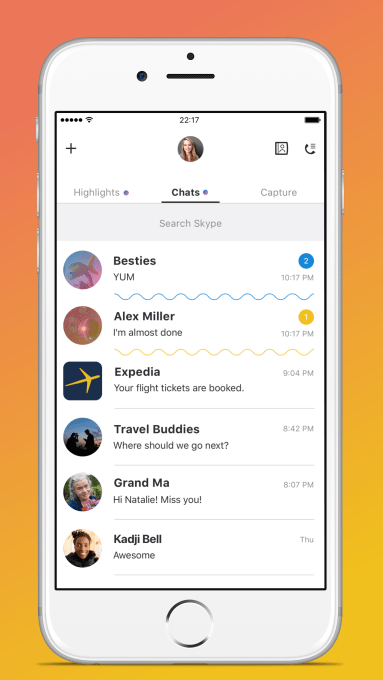 In the new version of Skype’s app, you can just swipe to pull up the camera – a now familiar interaction, thanks to the camera-first design found in today’s social apps.

You can then snap a photo or video – which you can then of course decorate with typed or handwritten text, as well as with Skype’s own set of stickers – very much like on other apps.

In the new version of Skype, your snapped photos and videos can be shared with individuals, in group chats, or can be posted to a new feature called Highlights.

The camera is available when you swipe right from the main screen, while Highlights are found when swipe left. 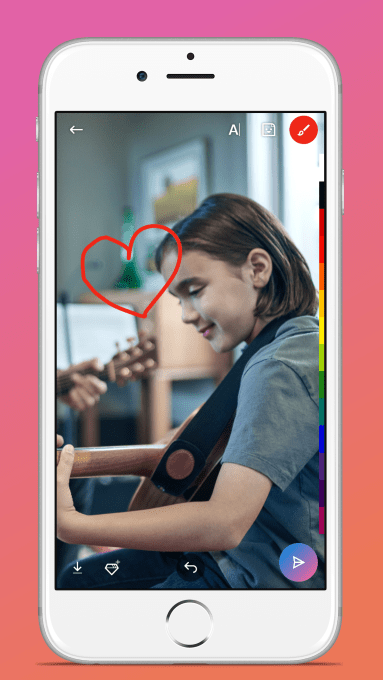 Highlights are Skype’s own take on Stories – something the company readily admits.

“It’s like Facebook has said,” says Raghav, referencing remarks made by Facebook’s VP of messaging David Marcus, who recently argued that Stories “is definitely a format, the same way the feed is a format.”

Raghav agrees. The feed is now commonly used in a range of apps – even those that aren’t personal social networks, like Microsoft’s business communications service Yammer.

“There’s a new medium that has risen,” he says of Stories. “When you think about this new way of interacting, [we want that to be] available also in this application.” 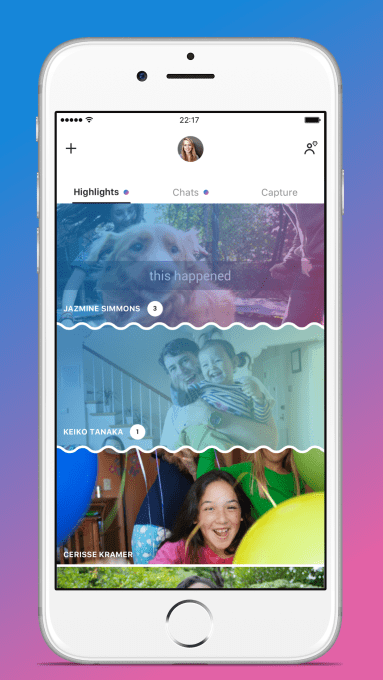 However, Skype has tweaked the Stories format a bit.

For starters, its Highlights are available for a week, not a day. (Though you can view your own content for 24 months, if you choose). Highlights are also not broadcast to your entire Skype network. Instead, they use a Twitter-like following/followers model – meaning only those who follow your Highlights can see these posts.

However, you can choose to “share” your Highlights with individual contacts or groups you manually select – a move which nudges the recipients to follow your Highlights if they don’t already, but doesn’t allow you to spam them with updates.

Followers can also react to Highlights posts, as they can to any Skype post, with an emoji. Here, Skype has copied from Facebook’s reactions – you can thumbs up (like), heart (favorite), or post emoji faces for reactions like sad, surprised, laughing, and angry. You can also type a response that’s then shared privately in a chat.

The other major feature rolling out today is an expanded selection of Skype’s bots and add-ins. Microsoft envisions how you’ll be able to chat directly with its virtual assistant Cortana, or its newer assistant Scoop, which pulls in news from MSN.com.

When a bot gets integrated in a chat, it’s called an add-in. That means you can call on the bot directly from your chat, like “Scoop, what’s up with X?” (where X is a current news item you want to know about). 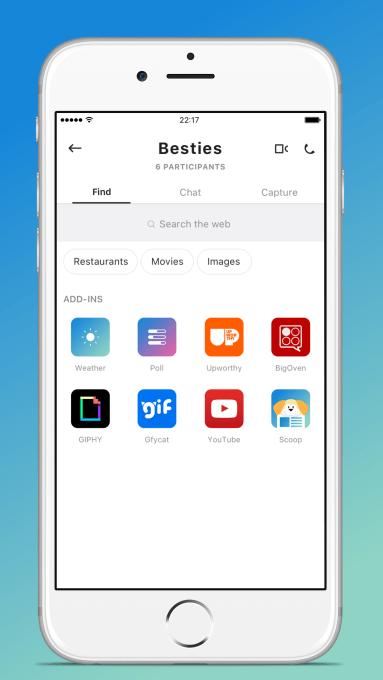 In chats, Cortana will be able to make suggestions, including quick responses like “LOL” or “can’t wait,” or others related to your conversations. Scoop, meanwhile, offers a one-on-one chat with personalized news story suggestions and summaries, but can also live in a group chat to share stories relevant to that group’s conversations.

Microsoft’s demo showed a number bots and add-ins, like Cortana, Scoop, Gfycat, Giphy, MSN Weather, Search (Bing), Polls, Expedia, Stubhub, BigOven (cooking), YouTube, and Upworthy, to name a few. However, Cortana will not launch until June in the U.S.

Though Highlights and add-ins are the standout new features, there’s a lot that’s different in the revamped Skype.

For example, you can now personalize the app’s theme by picking your favorite colors, react to anything in a chat with an emoticon, or even react using emoticons in video calls – a move that will temporarily overlay a big emoticon and colored background in your window for other callers to see.

You can also now type a message when on video calls which is shown in much the same way – something that could be helpful for when you’re on a group call, but don’t want to talk. 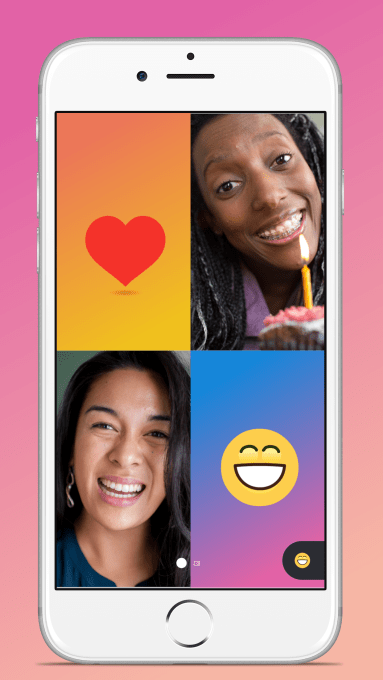 Video chats are also going to be upgraded in the future to support other types of interactions, including the ability to play games with friends or watch videos from streaming services together. Co-watching in groups is an area where a number of social apps are trying to gain traction – including Cabana from Tumblr, Uptime from YouTube, Fam, and others.

YouTube will be among the first services added for co-watching, we’re told, but Skype is having discussions with other streaming services about integrations. Meanwhile, gaming will initially leverage existing Microsoft assets like Minecraft, Solitaire, Mah Jongg and others.

The new Skype is available on Android today, and will hit iOS in a month’s time. (The delay is due to iOS’s inability to support staged rollouts, we understand.)

Desktop platforms, including Windows, Mac, Linux, and web, will get the new features this summer, along with Xbox.