Through Lyft and Uber, the sharing economy has taken a charge at cabs. Airbnb is making hotels palpitate in their pants. If TRVL has its way, it’s the travel agencies’ turn to tremble. Armed with 2.7 million freshly minted dollars from a conglomerate of angel investors, the company is hoping to augment services like Booking.com, Hotels.com and TripAdvisor by adding a soupçon of crowd magic.

Amsterdam-based TRVL launched its product late last year, and has been busy working on improving its service and lobbying investors. The company today announced it has closed a €2.5 million ($2.7 million) round to fuel further product development and growth.

“Today, when you’re researching and planning a trip for yourself or the people you travel with, you’re essentially doing the work of a travel agent,” the company’s CEO, Jochem Wijnands says. He is quick to highlight the biggest difference between you and a travel agent: “You don’t get rewarded for it.” 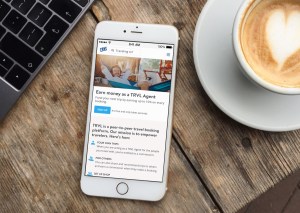 TRVL’s mobile-first design means you can plan your travel on the go. Which makes sense — you’re meant to be on holiday, and laptops don’t belong on the beach!

That’s the part of the equation the company is planning to change. TRVL enables the power of the crowd to work as a travel agency. Making the booking earns the agent a commission of “up to 10%” on every booking made. The bookings themselves are done through more traditional booking sites such as Booking.com.

“Think of TRVL as TripAdvisor with an earning model,” Wijnands explains. “We believe TRVL will change the way millions of people will book their trips online.”

The company currently employs 12 people, including some heavy hitters in the industry. The company’s COO is Arthur Hoffman, who’s best known for setting up businesses for Expedia in Australia, New Zealand, Japan and India. The company’s CEO Jochem Wijnands sold his previous company to Apple, before it subsequently turned the platform into Apple News, now featured on one or two iPhones around the world.

Travel continues to be a fiercely competitive space, but it’s one that’s been relatively untouched by the sharing economy’s grubby paws so far. I’m looking forward to seeing how that changes — and how TRVL is planning to sidestep regulatory challenges in the travel industry — as the company continues to gain ground.