Share economy startups which allow someone to ‘share’ their labour or skills have proliferated over the last few years. Even simple ‘share your skills’ communities with no commercial model have appeared such as Impossible.

Now these companies are joined by Pickle, a peer-to-peer mobile app that enables users to do ‘jobs’ for one another. Founder Daneh Westropp decided to create the app after running away from home and school at the age of 15 and realising that young people are often looking for ways to sustain themselves and make themselves independent.

Users simply say what they want or need and how much they are willing to pay (if anything), others who are willing and capable then ask questions, negotiate and accept. The money is brokered through PayPal and once the Job is completed both parties rate each other. The app takes 20% from each completed job, 10% from either side of the transaction. The company is aiming to raise a seed round. There is an iOS and Android version.

But there’s a twist. Within the app users can ‘dare’ each other, the idea being to add an entertainment element into the mix. And this is a social jobs app with hashtags, @user and threaded comments.

Although all this sounds pretty fanciful, Westropp says the target audience is “Gen Z” and Young Millennials who want to translate their interests into the gig economy. In other words they pick up tasks that are actually in line with what areas of work they are interested in. 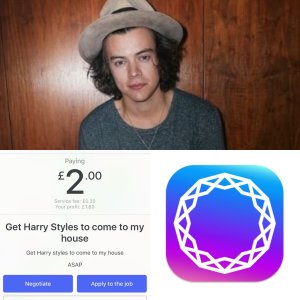 She says so far the app has garnered 90,000 users since its launch in January, entirely organically. She adds it is not a TaskRabbit in that it contains dares or challenges making it more like a “social platform for jobs”.

Westropp says Taskrabbit and Bizzby operate “inflexible business models, with long verification processes, limited tasks which translate into expensive and boring interactions with the consumer.” This means they are more like traditional job agencies with no community.

The founding team is Daneh Westropp, Bee Binitie, Dmtry Yhans. So far it has two Angel investors. Frederic Hofmann who is a director at Anthemis group (Fin tech investment company) and Nick Robbins.

Who knows, maybe it will take off with this generation. The challenge it faces is what happens when a young person answers a job that turns out not to be what they thought it was. There is a reason their competitors have longer verification processes rather than none.

In her defence Westropp says they plan a number of safety measures including Phone number verification; Social Network Verification; Admin Moderation; sending your location; Ratings. In addition every job post has a like, dislike and report function which encourages the community to flag jobs that seem suspicious or break community rules. Jobs that are disliked/reported are flagged to the Pickle team, who investigate the issue further.