This afternoon at TechCrunch Disrupt NY 2017, Pinterest president Tim Kendall showed off how the company’s visual search technology could be used to serve ads just by having users snap a photo using their smartphone’s camera. Today, the company launched the ability to connect advertisers with potential customers through “Instant Ideas” – a feature on Pinterest where a small circle at the bottom of a pin will take you to related pins. But Kendall says the company plans to make its visual search technology available to advertisers in other ways, further down the road.

For example, Pinterest may use visual search in areas like “Shop the Look,” which is focused on fashion, or in its Lens product.

As a reminder, with Lens, Pinterest made it possible for users to kick off searches across its service using their camera’s live feed or a photo back in February. The visual search technology can then find related products based on factors like color, texture, style, shape and more.

Soon, Pinterest will pitch to advertisers that they’ll be able to reach potential customers who are snapping photos with their phone’s camera of things they like.

He offered a brief demonstration of how Lens could work in the real world. 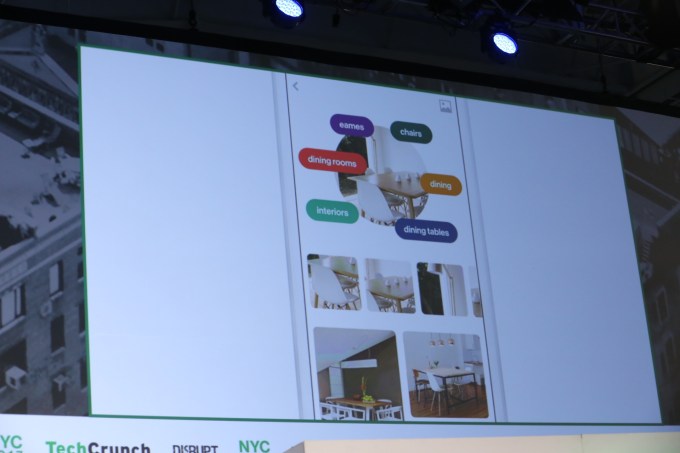 Say, you were visiting a friend’s house and really liked their dining room table. Instead of asking them where they bought it, you could instead launch the Pinterest app and take a photo. Currently, Pinterest would return a set of products of a similar style. But when Lens opens up to advertisers, they would be able to reach a highly targeted audience of customers who like a particular style of furniture by inserting their own ads in Pinterest’s visual search results.

What’s also interesting about this technology is that it can help advertisers reach consumers who may not even be able to identify what it is – specifically – about the product in question that appeals to them. That means the customer wouldn’t necessarily know what words to type into a search engine like Google (or even Pinterest’s) in order to seek out similar products.

It’s making the camera itself the search engine for products, instead.

This could help the company refine its pitch to advertisers down the road.

Pinterest now has 175 million monthly active users, making it one of the larger social networking sites on the internet but it still falls under Facebook and Google’s shadow when it comes to size and scale.

Today, it tells advertisers they can reach users earlier on in the e-commerce cycle – when they’re just looking to be inspired about new products like clothing, home goods, travel, etc. – by browsing the site. Advertisers can also use Pinterest to get in front of potential customers who weren’t yet even aware of the brand or its products.

“What we see is an ability to reach somebody before they’ve chosen a brand, or before sometimes they even know what they’re looking for,” says Kendall. “97 percent of our searches – we do 2 billion a month – are unbranded. …it’s an incredibly efficient place to reach the consumer,” he adds.

“In the near-term, it’s just going to allow [advertisers] to get a higher volume of high quality clicks,” explains Kendall, of the potential in opening visual search in Lens to Pinterest advertisers.

“We can just use the computer vision technology to do the relevancy match and ranking.”

This technology has not yet rolled out to Lens and Kendall declined to say exactly when that would occur. However, he did hint that the system may need more training data – including data from today’s launch of visual search in related pins and Instant Ideas, before that takes place.

That said, with the consumer-facing visual search technology available today, Pinterest has already identified over a billion objects within pins on its site, Kendall noted.