A few weeks back, Ford invited us out to Salt Lake City to spend an afternoon in the 2017 Ford GT supercar. They’re only making 250 of these things per year, and they’ll go for around $500,000 each. Needless to say, I mulled it over for about 9 milliseconds before buying myself a plane ticket and heading for Utah.

Before we dive in, a bit of backstory: back in 1963, Henry Ford II set out to buy Ferrari. The deal fell through in its final stages, leaving Ford with something of a grudge.

He set out to build a car that could beat Ferrari at Le Mans, the (even then!) legendary 24-hour endurance race that Ferrari had dominated for years.

It took a few years of defeat — but by 1966, Ford had cracked the code. They’d built a car they dubbed the GT40 MkII — and with it they swept the podium at Le Mans, their three cars walking away with first, second, and third place. Then they won again for good measure in 1967, 68, and 69.

50 years later, they’re celebrating the anniversary by reimagining the GT40 for the modern day. Thus, the 2017 Ford GT.

Now, I only got to spend a total of a few hours behind the wheel — if we’re going to do an in-depth review of a car, we need to spend at least a week in it. But I did walk away with some impressions.

This car drives the way every teenager who grew up with a poster of the GT40 plastered above their bed dreamed it might. You think, GT does. I tried pushing this car to its limits, and didn’t even get close. In a game of chicken between Greg and the GT, the GT won.

For the sake of maintaining an aerodynamic profile, Ford shaved just about as much space out of the interior as they could. I’m 6′ tall on the dot — and, to my surprise, I could sit inside the GT comfortably. Once in a track harness and helmet, however, I had to slouch a bit to keep from rubbing the roof; if you’re on the taller end and planning on track days, expect as much.

There’s not much in the center console in terms of gadgetry that you won’t find in more standard cars — these days, there’s just not much technology that can exist on the touchcreen of a $450,000 car that can’t exist elsewhere. Most of the tech goes into what you don’t see, like the fully carbon-fiber tub you’re sitting in and the 647 horsepower engine under the hood.

But speaking of technology: Ford is launching a Performance racing companion app, and it’ll be exclusive to the GT at first. You pop open the app on your phone, plug it into the car via USB, and it acts as a super purpose-focused GoPro. It records video, all while pulling speed, gear, and GPS data straight from the engine. At the end of your laps, it dumps it all out in a straight-to-Facebook-ready video, complete with lap times and a video game-style map of your realtime position as you blast around the track. Ford’s not the only one doing this (Chevy has something in a similar vein with their Performance Data Recorder), but it’s a nice touch and hopefully it trickles down to their other vehicles quickly. Here’s a screenshot from one of the videos: 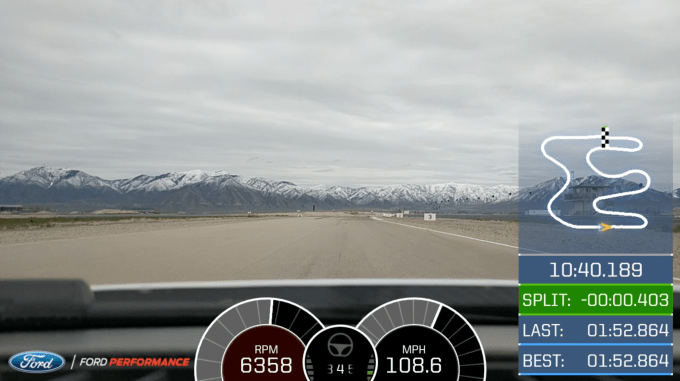 Now, to be clear, if it somehow isn’t already: this is not a car you buy as your everyday driver — even if you might have $450,000 to burn, and even if you somehow manage to nab one of the 250 of these Ford will make per year. It’s a race car that happens to be street legal; practicality is not the point. The trunk is the size of a large shoebox, and the interior is just big enough for two medium-sized people to sit side-by-side assuming they’re pretty good friends and don’t mind rubbing elbows all day. If you just want a car that’ll destroy most cars at stop lights but you also need something to take the kids to school in, there are other options.

But if you are in the position to put something like this in your garage and have already worked your way onto the list: don’t worry. I think you’ll be happy with your decision. And I’m super jealous.