vidia’s Jensen Huang is one of those rare CEOs who has, for a remarkably long and storied period, been at the helm of a company he helped create. In 1993, at the age of 30, he co-founded Nvidia and has occupied the top executive spot ever since. What began as a provider of relatively niche graphics processing units (GPUs) with a narrow field of general computing uses has evolved to become, arguably, the bedrock underlying the current AI market explosion.

As Nvidia gears up for its eighth annual GPU Technology Conference (GTC), which happens May 8-11 in San Jose, the company has a lot to celebrate. Its stock price hit record highs this year, its tech was everywhere at CES, and in addition to general AI applications, it’s found a new collection of deep-pocketed partners among automakers looking to usher in autonomous driving using neural networks powered by GPUs.

I spoke to Huang about how the company got to where it is today, as well as what GTC has become in the general landscape and what it means to Nvidia. Huang also shared some thoughts about the potential unlocked by GPUs in terms of future tech we might more commonly think of as belonging firmly to the realm of science fiction. 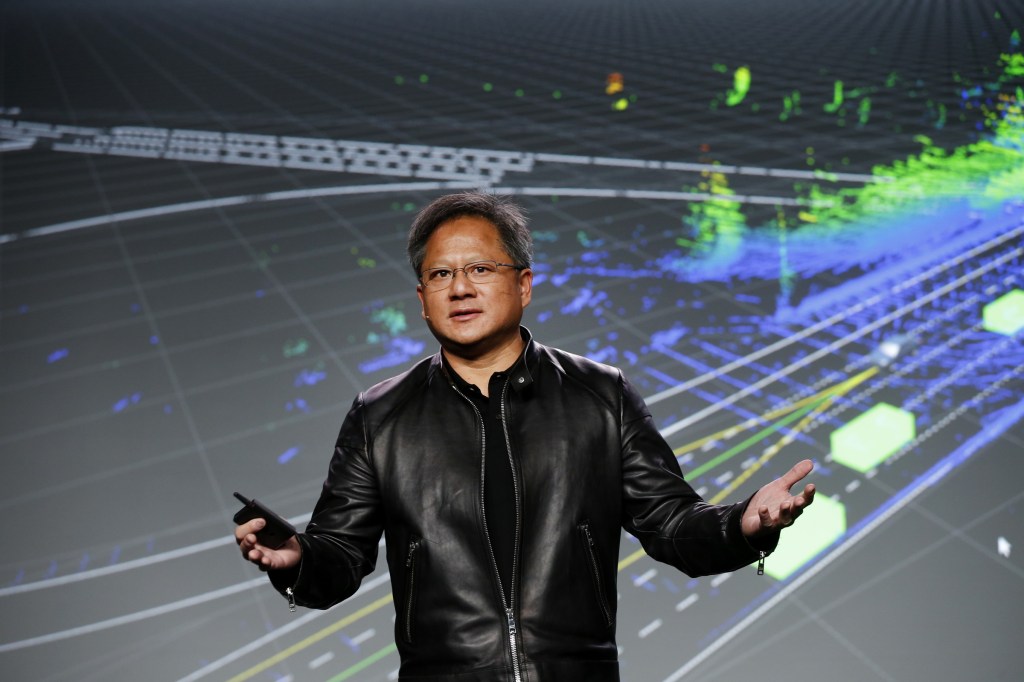 I asked Huang to compare the GTC of eight years ago to the GTC of today, given how much of Nvidia’s focus has changed.

“We invented a computing model called GPU accelerated computing and we introduced it almost slightly over 10 years ago,” Huang said, noting that while AI is only recently dominating tech news headlines, the company was working on the foundation long before that. “And so we started evangelizing all over the world. GTC is our developers conference for that. The first year, with just a few hundred people, we were mostly focused in two areas: They were focused in computer graphics, of course, and physics simulation, whether it’s finite element analysis or fluid simulations or molecular dynamics. It’s basically Newtonian physics.”

A lot can change in a decade, however, and Huang points to a few things that have changed in the past 10 years that have shifted the landscape in which Nvidia operates.

“The first thing is that Moore’s Law has really slowed,” he said. “So as a result GPU-accelerated computing gave us life after Moore’s Law, and it extended the capability of computing so that these applications that desperately need more computing can continue to advance. Meanwhile, the reach of GPUs has gone far and wide, and it’s much more than computer graphics today. We’ve reached out into all fields — of course computer graphics, virtual reality, augmented reality — to all kinds of interesting and challenging physics simulations.”

But it doesn’t end there. Nvidia’s tech now resides in many of the world’s most powerful supercomputers, and the applications include fields that were once considered beyond the realm of modern computing capabilities. However, the train that Nvidia has been riding to great success recently, AI, was a later development still.

“AI is just the modern way of doing software.”

“Almost every supercomputer in the world today has some form of acceleration, much of it from Nvidia,” Huang told me. “And then there was quantum mechanics. The field of quantum chemistry is going quite well and there’s a great deal of research in quantum chemistry, in quantum mechanics. And then several years ago – I would say about five years ago – we saw an emergence of a new field in computer science called deep learning. And deep learning, combined with the rich amount of data that’s available, and the processing capability came together to become what people call the Big Bang of modern AI.”

This was a landscape shift that moved Nvidia from the periphery. Now, Nvidia’s graphics hardware occupies a more pivotal role, according to Huang – and the company’s long list of high-profile partners, including Microsoft, Facebook and others, bears him out.

GPUs really have become the center of the AI universe, though some alternatives like FPGAs are starting to appear, as well. At GTC, Nvidia has had many industry-leading partners onstage and off, and this year will be no exception: Microsoft, Facebook, Google and Amazon will all be present. It’s also a hub for researchers, and representatives from the University of Toronto, Berkeley, Stanford, MIT, Tsinghua University, the Max Plank Institutes and many more will also be in attendance.

GTC, in other words, has evolved into arguably the biggest developer event focused on artificial intelligence in the world. Nowhere else can you find most of the major tech companies in the world, along with academic and research organizations under one roof. And Nvidia is also focusing on bringing a third group more into the mix: startups.

Nvidia has an accelerator program called Inception that Huang says is its AI platform for startups. About 2,000 startups participate, getting support from Nvidia in one form or another, including financing, platform access, exposure to experts and more.

Huang also notes that GTC is an event for different industry partners, including GlaxoSmithKline, Procter & Gamble and GE Healthcare. Some of these industry-side partners would previously have been out of place even at very general computing events. That’s because, unlike with the onset of smartphones, AI isn’t just changing how you present computing products to a user, but also what areas actually represent opportunities for computing innovation, according to Huang.

“AI is eating software,” Huang continued. “The way to think about it is that AI is just the modern way of doing software. In the future, we’re not going to see software that is not going to continue to learn over time, and be able to perceive and reason, and plan actions and that continues to improve as we use it. These machine-learning approaches, these artificial intelligence-based approaches, will define how software is developed in the future. Just about every startup company does software these days, and even non-startup companies do their own software. Similarly, every startup in the future will have AI.”

Nor will this be limited to cloud-based intelligence, resident in powerful, gigantic data centers. Huang notes that we’re now able to apply computing to things where before it made no sense to do so, including to air conditioners and other relatively ‘dumb’ objects.

Given how far-reaching Huang thinks AI will be, I asked him whether he now views Nvidia as first and foremost an AI company. Nvidia’s gaming and visualization businesses are still very sizeable contributors to its financial picture, after all, but it seems clear that the future focus for both Huang and GTC is firmly trained on AI.

“Today, I think that AI is a very, very exciting and emerging computing approach, and it’s pretty clear that in a period of around 10 years, almost every form of computing will be AI-based,” he said. “So today, we are a GPU computing company that does AI. Someday, we would likely just become an AI computing company.”

The two are closely linked in Huang’s mind, however, and the binary of the distinction is probably more on my end than on his own. When asked about what potential AI applications excite him the most, Huang talks about healthcare and others that come up with fair frequency when talking to the leading companies in this space. But he quickly moves on to other, more time-distant realms.

The most powerful thing about human intuition is actually intelligence augmentation.

“The other area is where alternate reality and artificial intelligence come together,” he said. “Whether it’s having a real-world holodeck, or whether it manifests itself in robotics, I am super excited about that. So where humanity starts and ends, and where robotics starts and ends. Cybernetics, robotics, artificial intelligence: That whole field is super exciting, and I think we’re going to see a lot of advancements there in the next few years.

“That work’s been underway for a long time — the ability to insert electronics into the body. And have it fuse with with our neurons, and our nerves, and our tissues is something that has been going on for some time. In fact, the most powerful thing about human intuition is actually intelligence augmentation, and intelligence vision is what we’re doing now: It’s called artificial intelligence. When we take that to the limit, electronics will just be inside our body, and what is the size of a cell phone today, that’s just going to be one of the cells in our body someday.”

We’re not yet at the point where GTC is a cyborg-heavy affair, but the range of projects and technologies on display will likely include at least a few such visions of the future. Meanwhile, Huang’s GPUs are enabling a new generation of startups to reach for that next level of human reality.