Following the widespread phishing scam that affected Google Docs and Gmail users this week, Google says it’s now rolling out a new security feature in its Gmail application on Android that will help warn users about suspicious links. This feature may not have prevented this week’s attack, however, as that attack involved a malicious and fake “Google Docs” app that was hosted on Google’s own domain.

However, the additional security protection is a step in the right direction, given how many users access Gmail on mobile, and the increasing sophistication of these phishing attacks that can even fool fairly tech-savvy individuals.

In this week’s attack, for example, you would have received an email from a known contact who said they were sharing a document with you. When you clicked to open the document, you’d be taken to an innocent-looking web page hosted by Google. The page wouldn’t even prompt you for your password, but instead listed all your Google accounts ready to be clicked.

You would be asked to give an app named “Google Docs” account permissions – but it wasn’t the real Google Docs. And once it had access, the worm began spreading to everyone in your contacts list. 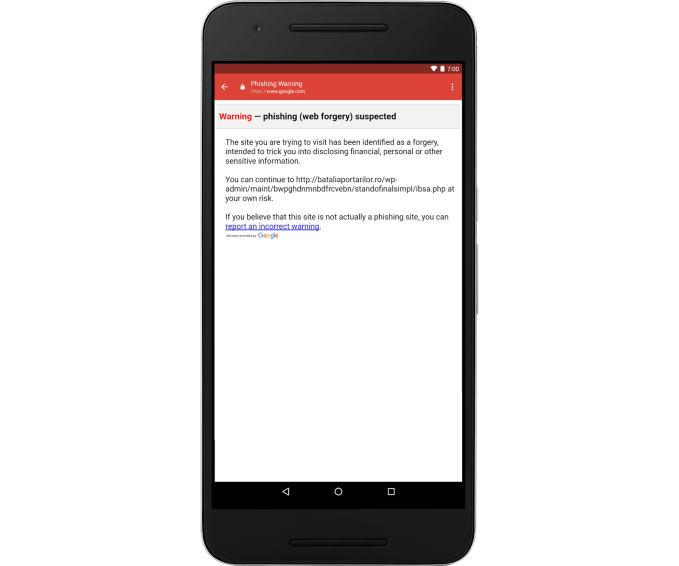 The new phishing protection in the Gmail app for Android relies on Google’s Safe Browsing technology, which can warn web users if they’re about to visit a page that’s impersonating a legitimate website, like a bank, online store, or any other site trying to trick you into sharing your username and password information.

In Gmail, if you click on a suspicious link in your email message, the app will display a warning messaging that reads:

The site you are trying to visit has been identified as a forgery, intended to trick you into disclosing financial, personal or other sensitive information.

It then informs you that if you choose to proceed to the site, you do so at your own risk.

It doesn’t seem likely that the recent phishing attack would have been flagged by this system at the time of its occurrence, as it was a hosted app on Google’s own domain.

Google said on Wednesday it had taken action against the phishing attack that had affected Gmail and Google Docs users. It disabled the offending accounts. removed the fake pages, and pushed updates through Safe Browsing and its abuse team. The company also requested users to report any suspect phishing emails in Gmail.

The new mobile feature is rolling out this week to Gmail users on Android.