How often do people sit back and think about the meaning and origin of words? Very rarely — at least in our day-to-day jobs as VCs.

For example, it recently dawned on us that the term “movies,” which we all take for granted, is actually a cute colloquial abbreviation of “moving pictures,” which is quite literally what the viewer experienced when watching early films.

Like the early film-making era, we are currently smack dab in the middle of the widespread proliferation of a new medium that plays with and alters our perception of space, time and physical presence. It’s a new something-reality, and folks in the industry and consumers alike are all scrambling to come up with the best way to describe these burgeoning modalities of interacting with physical and virtual space. 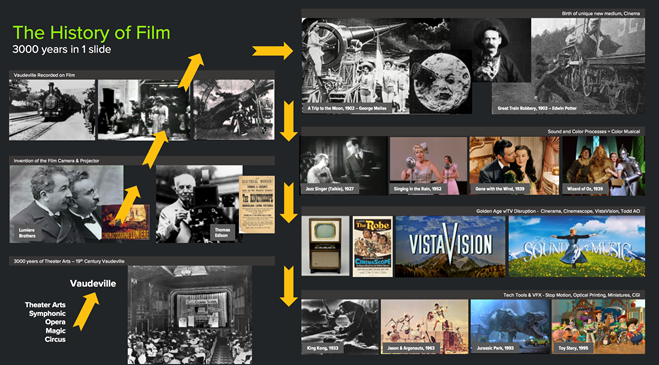 There has been quite an arms race and land grab, with some companies staking out VR as the social and entertainment platform of the future, while others double down on AR for its enterprise and productivity promises. Microsoft has also placed strong bets on mixed reality, or MR, as a complement to AR, and recently announced Spectator View, which allows others to see on a 2D screen what a HoloLens user sees in their world in real time. Various impassioned debates have been had about the AR-merits of Pokémon GO or Snapchat filters, if the killer app will come in VR, or AR and likewise with the form factor.

Why does any of this word-sparring even matter? We’re here to argue that it doesn’t. At least not right now, not this early. We believe there should be a new paradigm to consider for companies working on the virtual to reality continuum that is encompassed under the term XR (“X” used in the same way CxO denotes a C-suite officer, as opposed to a shorthand for “extended”).

To bet that one specific point on the continuum will “win” is a rather narrow vision of what the future may look like. To believe in XR — that a fundamental shift is occurring in the way people view, share, create and use media data — is far less risky. In fact, it is all but a forgone conclusion on what has been happening with accelerating speed over the past couple of years.

Snap recently unveiled itself as a camera company. Reports that it has explored 360 and stereoscopic cameras as a subsequent product to Spectacles validates our point. Snap’s recent positioning seemed somewhat abstruse and confusing for investors, with The New York Times reporting “investor concern could be amplified by Snap’s insistence that it is a camera company … its co-founders … may not really think that, but it still jars that they say so.”

In the future, we see people interacting with the virtual world and real world in seamless, frictionless and continuous ways, not bound by delineations of experience between “VR,” “AR” or “MR.”

The New York Times is so incredulous of the opening line of the Snap prospectus, that “Snap Inc. is a camera company,” that they muse hopefully that Spiegel and Murphy do not believe their own vision. However, when viewed within the XR paradigm, Snap’s focus on being a camera company is far less a head-scratcher than it is a no-brainer. By positioning itself as a camera company, Snap is able to play across the XR continuum and across all layers of the stack, from form factor to content creation to distribution and beyond, in a way that would have been impossible if their core identity was that of a social platform. This precise issue is what has been a challenge to bridge for Facebook and Oculus.

Indeed, we believe the tools layer of the stack being built for the creation and delivery of XR content will become applicable to all realities as the technology matures. Along this spectrum, VR, 360 video and “overlay” forms of AR are the experiences currently shipping and finding traction (and what companies like Snap and Facebook are focused on), in part because they are the experiences that are the easiest to deliver.

However, over time, we absolutely believe that AR fundamentally has broader applicability because you are able to simultaneously interact with virtual data without occluding any of the senses from reality.

The chart below shows AR adoption as an accelerating function of time. The difficulty of delivering good-enough AR experiences will decrease as the market matures, compute power strengthens and, importantly, tools that work across the entire spectrum become proficient and proliferate. We see the potential for a form factor to emerge that allows for both AR and VR (and everything in-between) experiences, depending on the specific application and use case. 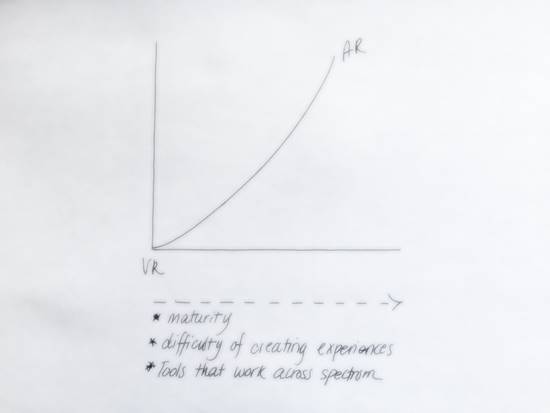 As such, from a software and content perspective, companies that think about XR in its full continuum, that perhaps even consider themselves an XR company at the core identity level, will be the most successful in the long run, as opposed to strategies that have a static focus on any one point in the continuum.

This philosophy, while not adopted by everyone, is fast gaining traction. Many companies, including Valve, Oculus, Unity, Google and Nvidia, are part of a Khronos working group that was recently rebranded as “OpenXR,” geared toward establishing a cross-platform standard. PlutoVR and Pixvana are two startups tackling the XR problem-space in communications and content creation, respectively, and experiences such as The Void, Modal and Two Bit Circus are developing for this new variable reality paradigm in the entertainment space.

In the future, we see people interacting with the virtual world and real world in seamless, frictionless and continuous ways, not bound by delineations of experience between “VR,” “AR” or “MR.” This is in the same way someone on their phone will say “I’m checking the weather” as opposed to “I am on my handheld mobile.” We refer to this new modality of human and machine interaction, both in its current state and where it will evolve, as XR. We are greatly excited by companies that are not only building the great tools and delivery platforms for VR content today, but understand the urgency to evolve with the fast-changing XR landscape to build platforms that will carry us across all thresholds between the real and virtual.