A new social polling game called Treeo has launched its modern-day (and cleaned up version) of the popular party game, f*ck, marry, kill. But this time, instead of voting on your plans for celebrity crushes, you’re voting on other topics categorized into sections like Home, Fashion, Movies, Food, Music, Sports, and Politics. And the way you vote is different as well: you drag the photo to an emoji that represents your feeling toward the topic at hand.

Generally, these emoji are meant to indicate “positive,” “just okay,” and “bad,” but because Treeo also features user-generated content, they can really be anything you like.

Social polling apps aren’t new, and they can be popular – currently, the tween and teen-friendly Wishbone is winning with its millions of users, for example. These apps function largely as time-wasters, but they’re also social barometers arriving at a time when the app’s young users care very much about the opinions shared by their peer group.

Treeo is similar in that respect. Like Wishbone, it’s taking the temperature of its user base on its pop culture-infused questions, but in a way that elicits a different set of answers. It’s no longer a game of “would you rather…?,”, but is instead, “which is this?”

Indie developer Mike Rundle came up with the idea for Treeo after selling his earlier app Filters for iPhone to tap tap tap, the makers of Camera+. He and a friend decided to research why the 3×3 celeb voting game was so popular, and realized that it’s not just the game’s racy nature that makes it fun to play.

“We found that the core reason it’s popular is for two reasons: the first is because it’s satisfying for humans to classify things into buckets, the second is because it forces people to make slightly uncomfortable choices – which makes it a whole lot more fun, sort of a mental challenge or a brain teaser in many ways,” says Rundle.

The friends then decided to code this experience into a socially addicting app, which led to the creation of Treeo. (Rundle’s friend is still working full-time and declined to be named.) 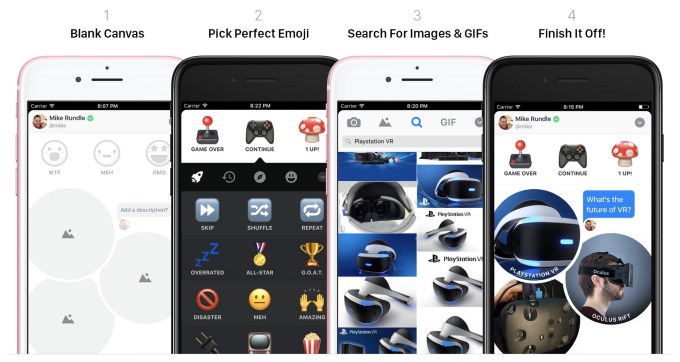 While the app’s makers seed content in the seven main categories, anyone can create their own “Treeo” as these 3×3 groupings are known. The content for the Treeo’s images can come from their Camera Roll, phone camera or via the built-in GIF and image search. The images can optionally have a title, description and URL, and the overall Treeo can also have an optional text description. You then pick the emoji categories you want to use for voting, or you can even customize your own.

If that sounds like too much work, you can just sit back and vote on the Treeos in the app instead. To do so, you drag the emoji to the image to indicate your vote. Afterwards, you’re shown how your vote compares with the popular vote, as well as how your friends voted.

The added ability to see friends’ votes makes Treeo more social. Plus, you can reply to friends’ votes by tapping on emoji or writing full messages. Those replies appear in the app’s Activity tab.

However, because you’re voting on sets of three, the ability to compare votes is a little trickier than with an app like Wishbone. 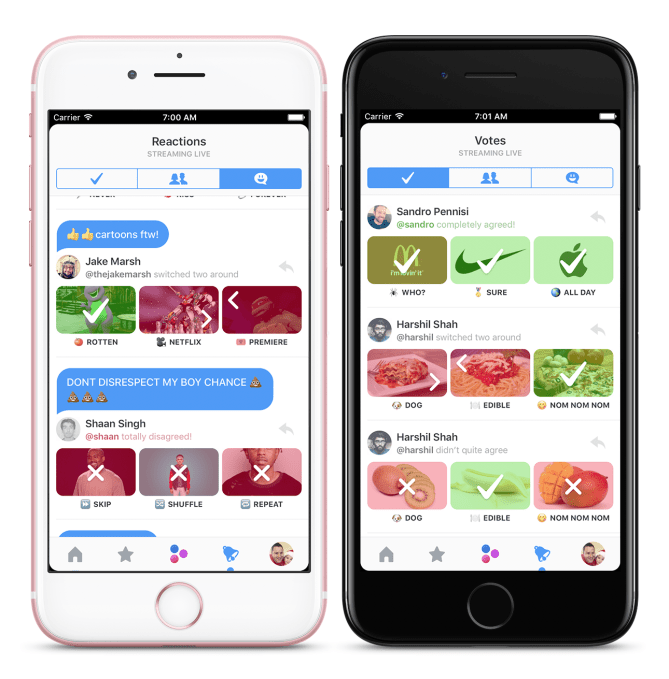 The app also has sections for browsing its most popular, featured, trending, and newest content.

While the overall concept sounds like this is yet another voting app designed to appeal to teens, Rundle believes Treeo could pick up among older users, as well.

“Wishbone has focused on the tween/teen demographic in the past year or so, but if you dive into the commentary online and their reviews on the App Store, there’s a huge contingent of users who have been turned off as the content has been skewing younger,” he says.

“Our goal has always been to create a new type of social network where the atomic unit of content isn’t a photo or text, but a miniature interactive game…we want to make sure Treeo has something to offer all demographics without turning anyone off,” Rundle adds.

The app may eventually monetize through ads in the Treeos. The team is talking to some online retail brands about those options, but has nothing to announce here yet.

After being live for 24 hours, Treeo says it’s seen over 40,000 votes casts, and had a small number of users hanging around the app for an hour which is a promising start.

Treeo is a free download on the iPhone App Store.