Nodez is a company that promises to turn your entire home into a smart home with a single, all-encompassing package. Their $196 product includes a little of everything including a smoke/CO2 detector, switches, and even a flood sensor. In all you get nine smart objects for the cost of one Nest product.

The trick is that the team has reduced the cost of the network and all of the sensors considerably. The system uses Bluetooth Low Energy 5 and connects via IFTTT to the Internet, allowing you control switches based on various inputs.

“In short, we realized that the ‘Smart Home’ space was never arriving,” said Taha Arvas, CMO. “Years of bad devices that were ridiculously expensive were being pumped out with no new tech/lower prices. Homes were cluttered with multiple devices that didn’t talk to each other and operated using multiple apps. We designed these devices for our own personal use at first and realized there was a real opportunity here.”

The kid is aimed primarily at the average smart home user who wants a fully-featured system without breaking the bank. It’s not quite as fancy as, say, a Dropcam setup, but it’s offers bare-bones functionality at a much lower price. You can think of it as a sort of smart-home-theater-in-a-box solution. 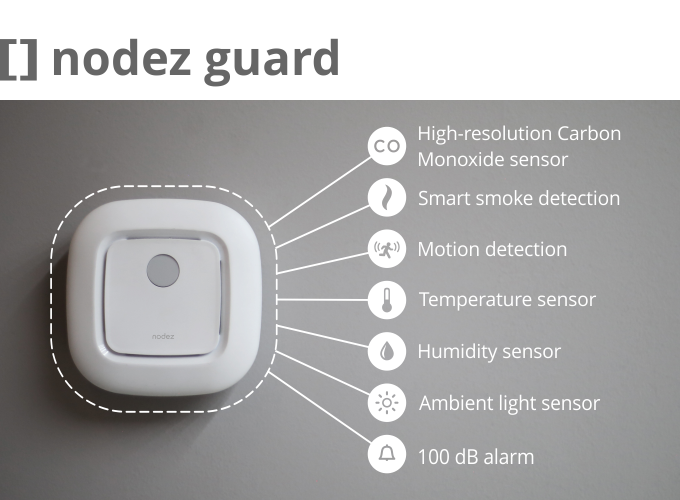 The CEO, Sait Borlak, has built multiple IoT devices for R&D organizations and the CTO, Okan Saracoglu, did work in 3D printer design and antenna theory. The team is based in New York.

I’ve seen some of the Nodez nodes in person and they looked and worked great. They’re shipping the final product in November 2017 and they’ve nearly hit their crowdfunding goal of $100,000.