Trust Apple to be courageous enough to strip away all the old-fashioned USB ports. And trust the rest of us to realize that 90 percent of our peripherals still run on the old standard. Apple’s retort is to sell you a one-way ticket to dongle hell. Then Homey comes along with its Indiegogo campaign to show the fruit giant how it’s done.

The elevator pitch is simple: Take a USB-C charger, add three USB-A ports, make sure the two can talk to each other and job done. In effect, what you get is a small power hub that’s also a charger. Or a charger that’s also a power hub. All in roughly the same size as Apple’s own USB-C charger for laptops — and at the same price point, too.

The question on my mind becomes: Why the hell didn’t Apple just ship something like this with its laptops? Or at least sell it as a potential accessory? 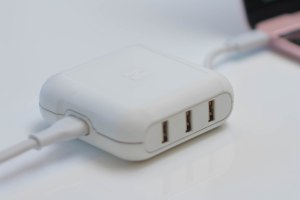 Take a USB-C charger. Add three USB-A ports and build in a data hub. It’s such a good idea, it’s a mystery why nobody else has done it yet.

I tried a prototype of the PowerUp for a little while, and it’s a solid piece of engineering. Transfer speeds between USB-C and USB-A seem reasonable (the company claims it’s USB 3.0, but the speeds I was seeing were a little bit lower than you’d expect from the standard). The one I tried was obviously an engineering sample — the glue gives it away — but if the company is successful in scaling up their manufacturing, they may very well be on to a solid winner. PowerUp is a simple product, but then, all the best products are.

It’s not a 100 percent home-run, however. In particular, I wasn’t a huge fan of the short cable between the power brick and the USB-C plug: It makes sense if you always work at a desk (maybe your PowerUp should live at the office?), but if you work in plane seats or frequently work with your laptop balanced on your lap, your power brick is going to be dangling from the USB-C port… probably not a great idea.

The thing that really confounds me is how Homey is able to be first to market with this. To pick an obvious competitor, Anker has been making USB-C and USB-A power solutions for donkey’s years, but hasn’t started including data transfer as part of their solutions yet.

Homey is an interesting company, its PowerUp product has comprehensively smashed its $25,000 goal on Indiegogo and the campaign has another month or so to go. Check it out.