Previously, users had to email Uber’s support team with an account deletion request and wait for someone to respond.The account deletion process was slow and aggravating for users who, particularly recently, have been leaving the company in order to make a political statement. Privacy settings were (and still are) stored in a phone’s settings, but Uber found that users didn’t know how to find them — so the company is bringing the settings into the app itself.

When Uber first launched its ride-hailing service, account deletion requests had to be dealt with manually. As the company grew, this strategy didn’t scale. But it took a while for Uber to replace the backend functionality in order to make Dear John’s swift deletion possible. 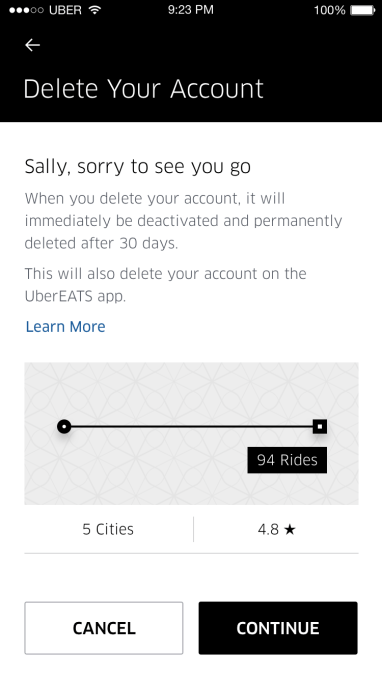 The new screen users will see when they delete their accounts.

The problem found a spotlight in late January, when a campaign to #DeleteUber spread across social media, encouraging users to dump Uber. #DeleteUber was a response to Uber CEO Travis Kalanick’s position on an advisory committee to President Donald Trump and Uber’s perceived strike-breaking activity at JFK airport after a protest against Trump’s travel ban.

Uber maintains that it wasn’t trying to disrupt the airport protest — it dropped its surge pricing a half-hour after the protest ended — but the damage had already been done. Around 500,000 people deleted their accounts, according to the New York Times. The social media backlash put Dear John to the test. A version of the feature was spun up overnight to keep up with the flood of requests. (Kalanick also stepped down from the Trump advisory council.)

“The good thing about #DeleteUber is now people know what I do,” joked Roche Janken, one of the engineers who worked on the project. The campaign gave people a way to express their frustrations during a politically fraught moment, she added.

Dear John isn’t just designed to delete accounts; it’s a portable feature that can be used throughout Uber to delete data, even as new kinds of data are added to Uber’s systems. The idea is to make it easy for any Uber employee to build deletion into new projects, so that unnecessary data retention isn’t an issue for Uber going forward.

Uber’s also using its new deletion process for contacts, so users who have previously uploaded their contacts in order to share their location can remove them.

Uber has also faced pushback over the way it handles location data. Last fall, the company removed the option to let users share their location with Uber only while using the app, forcing them to choose between “always” and “never.” Uber said it would only track users’ location for five minutes after a ride ended, but some users remained wary about the change. 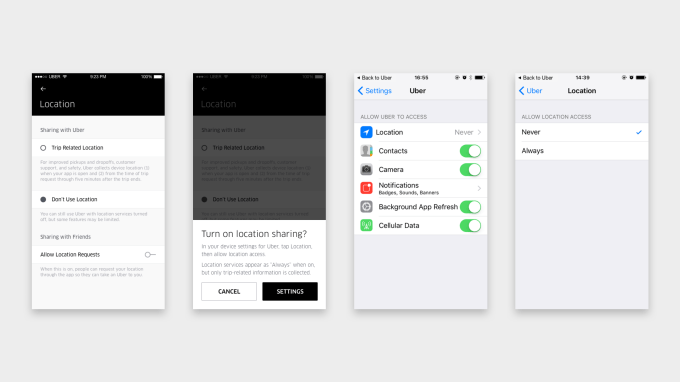 Uber will make it easier for users to access their location settings.

The company isn’t reversing its location policy, but it is trying to be more transparent with users about how it handles location information. A new screen in the app will make it easier for users to find information about location tracking, rather than hunting for it in their phone’s settings. Users will also be able to choose whether or not to let friends hail a ride to their location.

“I think of the user,” engineer Is Angieri told TechCrunch. “I want to empower them to access data the way they want. I think of privacy as a form of expression.”

It’s not yet clear when all the new settings will become available to users. In a blog post, Uber CISO John “Four” Flynn wrote that the options would appear under a Privacy Settings menu over the next few weeks.