Snapchat will no longer show that annoying white border around old photos that you share from Memories.

Previously, if you shared a photo from Memories that was more than 24 hours old it would have a white border around the image.

While Snapchat’s goal was to remind viewers that this older content wasn’t truly ephemeral, the ugly border ended up annoying users who didn’t want their snaps altered, sometimes to the point where they would decide not to share the old content at all.

Disincentivizing users from sharing content is a problem for any social platform, and especially one for Snapchat which is now trying to keep up with the rapid growth of Instagram Stories.

So this change should help increase the amount of old Memories that users decide to send to friends and post to their story, since they no longer have to worry about it looking ugly or uncool. While shared Memories will still have a small note at the top saying how old the image is, it’s much less intrusive than the border.

Notably, this doesn’t change how Snapchat handles photos shared from the camera roll. 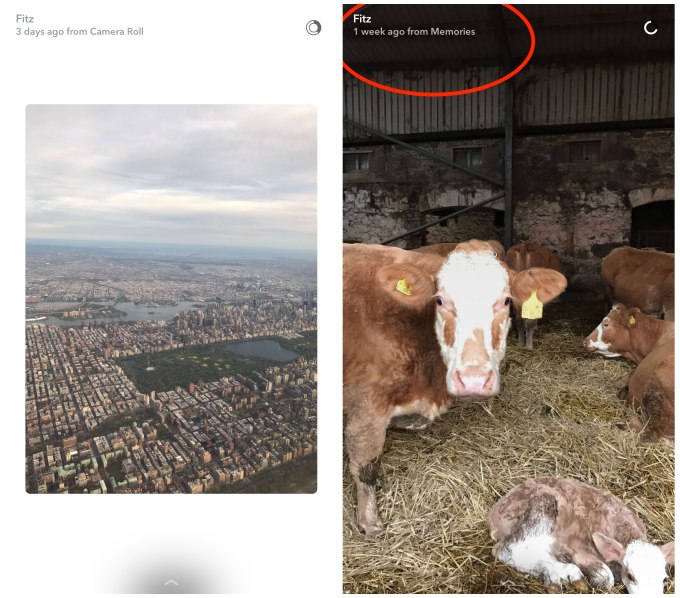 LEFT: How photos shared from the camera roll appear. RIGHT: How old Memories will now appear.

The app will still treat Memories (images captured then saved from within Snapchat’s app) differently from camera roll images (images taken on a phone’s native camera app). So any image uploaded from the camera roll will still have a white border around the image.

The change is essentially forcing users to choose which they value more — the ability to share old borderless images in Snapchat and have a good-looking story, or the ability to use their iPhone’s native camera app (which can capture higher-quality photos and videos with more features because it’s not relying on a public API). It’s also another signal that Snap truly does see itself as a camera company, and wants to be the default app people open when they go to capture a photo or video.

This differs from Instagram’s approach to old photos in Stories: The app lets you post any photo less than 24 hours old to your story without any ugly border or notation, regardless of where it was captured. This move has been well-received by users as it’s essentially the best of both worlds — you can use a native camera app while still sharing old content. And the 24-hour limit doesn’t really matter on Instagram Stories, because if you like an old image that much you’ll probably just post it as a regular old Instagram.