Today is the last day to comment on the FCC’s proposal to do away with net neutrality — and despite what leadership there has said, that’s definitely how the document reads. You are free to make your thoughts known on the notice of proposed rulemaking, as it’s called, and here’s how to do it.

Because millions of commenters nearly crashed the entire system when net neutrality was being established, the FCC has prudently improved the process ahead of the “significant public engagement and a high volume of filings” sure to come over the months. Here’s how to use it.

If you’re just a citizen who wants to make your voice heard, there are two ways of submitting a comment in the FCC’s Electronic Comment Filing System. First, go to the listing for the “Restoring Internet Freedom” proposal — yes, that’s what it’s called. On the left are two buttons.

(If the link above doesn’t work for you, go here and type “17-108” in the top box. It should fill itself in and the result will be the same.)

If you just want to write a note explaining your views or answer of the many questions in the NPRM, click “Express” — this has fewer boxes to fill out and no option for attaching documents.

For most people, the page should look like this: 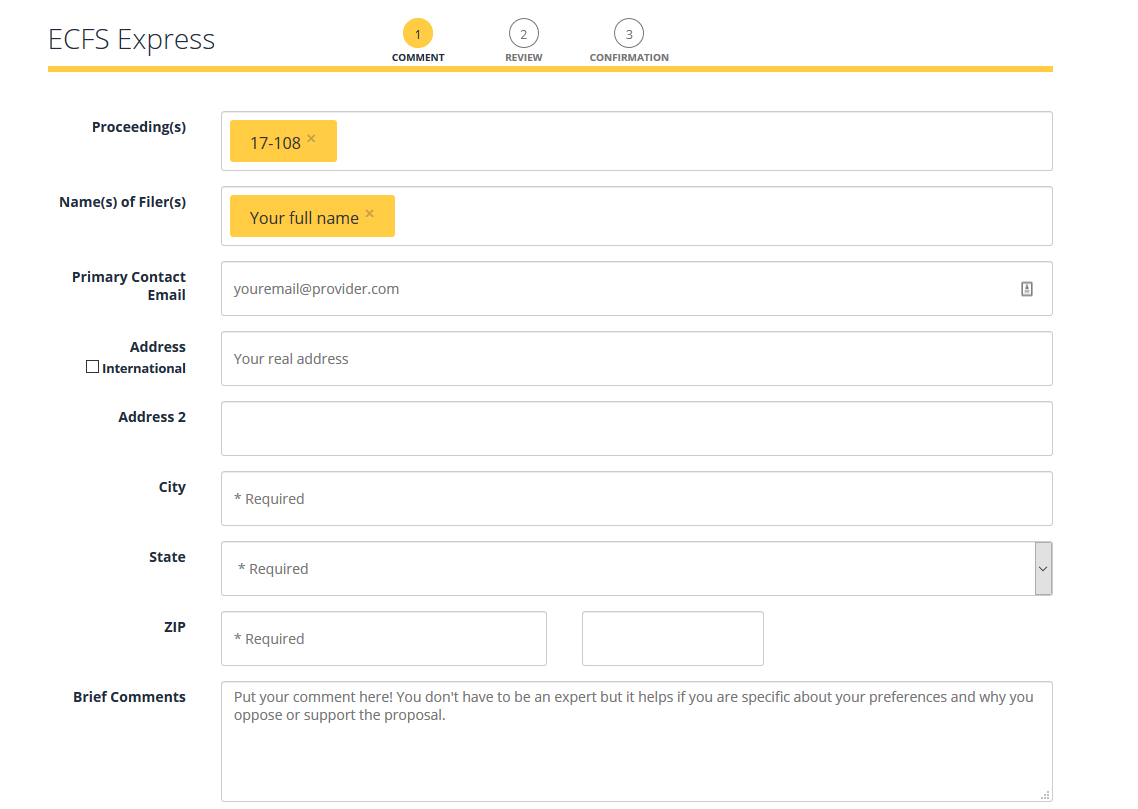 If, on the other hand, you are (for example) a lawyer or professor and want to attach a more substantial analysis or chart, use “New Filing” and you’ll have the relevant tools.

Note that all this information will be publicly available, including your name and address! That’s part of the deal if you want to take part in the process. It also helps keep repeat and fake submissions down. (They’ll probably throw away the ones signed “Mickey Mouse.”)

For organizations and bulk submissions

Do you work at an organization, charity, school or the like, and have a bunch of comments that you’ve collected that you’d like to put into the system? The FCC respectfully asks that you not submit hundreds or thousands of similar comments via the ECFS form, as it can bog things down. Instead, you can submit them in bulk — they’ll all still count as individual messages, though!

Go to this page and download the template CSV file — it’s basically a spreadsheet with a number of basic headings that can be parsed easily by the FCC system. The template already has the correct information in the first three columns.

Just transfer the data from your form to that spreadsheet, then attach the spreadsheet and let the FCC know how to get in touch with you if something’s wrong with it. If you’re planning on submitting a really major collection of comments, the FCC asks that you get in touch first at ECFSHelp@fcc.gov.

Want to build a web app so your users can submit comments without going to the FCC website? There’s an API for that. You’ll need curl and a key from api.data.gov. Got those? All the necessary snippets and documentation are here.

What should you write?

All the comments will be looked at in one way or another, but substantial ones that address specific points in the proposal will almost certainly get a little more attention. Make your position clear, whatever it may be, and use the paragraph numbers in the NPRM to call out specific points. You can download it in a couple of formats here — it’s long, but scan through it and you’ll definitely find something worth commenting on.

Take your time to craft a substantial comment addressing a specific issue you can speak to personally, or that you’ve looked into enough to feel you have an informed opinion.

For example, say you wanted to weigh in on whether the ban on broadband providers throttling certain content is a good idea, or if you trust them to do so voluntarily. You could write:

Paragraph 82 asks for input on whether throttling should be regulated. In the past ISPs have throttled content based on their own determination of what was lawful or permissible, and had to be forced to stop in the courts. Isn’t it possible they could do this again? I’m also concerned by mobile providers who say a plan is “unlimited,” but when you exceed the data cap, only throttle sites and services that aren’t part of their approved zero-rating network. Thanks for reading my comment.

You can be more broad if you want, even if you’re not quite sure what things like Title II and Section 706 are:

I’m worried that the protections that are in place will be weakened if we change the way they’re enforced. I would support a new regulation style if it guarantees the same or better protections, but not if we lose any.

This kind of input is important, too. Let’s just try to avoid things like “You suck FCC! XD”

Unless you want to, you don’t have to have references or links or anything. This is about making your voice heard, not making a case in court. As long as you make your point clearly, your comment will be counted among those preferring one course over another.

That’s it — now get commenting! Tell ’em TechCrunch sent you.