We were just outside the Marriott on the edge of downtown when the conference doors opened. I remember saying something like, “Those people… they seem a little different…” And suddenly there was a horrible strident laughter all around us and the street was full of what looked like hairy steampunk neohippies, all vaping and toking and comparing tattoos in clusters around the main entrance, which displayed a MAPS PSYCHEDELIC SCIENCE 2017 sign like a banner marking the gateway to hell. And a voice was screaming “Holy Jesus! What are these goddamn animals?”

Then it was quiet again. My attorney had taken his wallet out and was using a pirated Coin card at the pay station to facilitate the parking process. “What the hell are you yelling about?” he muttered, staring at me with pupils dilated by the atropine he took for his heart arrhythmia. “Never mind,” I said. “Let’s check in.” No point mentioning those freaks, I thought. The poor bastard will see them soon enough.

I knew what this was all about. The things I overhear as a BART cop don’t just put my finger on the pulse of this metropolitan area, they force my fist around its savage beating heart. This conference purported to be about “science” and “culture” and “responsible drug policy,” but really at its dark heart it was about ending Prohibition. Madness. If there’s one thing history has taught us, it’s that Prohibition is always a good idea, always works and never suffers from inherent contradictions, catastrophic emergent properties and/or weaponization by institutional racism.

I looked at him with alarm, worried he was suffering from yet another serotonin-syndrome seizure brought on by the combination of his anti-depressant Zoloft and his anti-migraine triptans.

“Smart drugs. Improve cognitive function. Lot of my tech clients, they’re into them. There are nootropics startups. Andreessen Horowitz invested in one.”

“Sure,” I said. “But these drugs,” I waved my hand contemptuously at the neohippies, “these drugs are bad, OK? Because they’re illegal.”

“I hear a lot of the Valley’s into microdosing LSD these days. Makes you smarter, more creative. Like nootropics are supposed to do.”

“No, not at all like nootropics, because it’s illegal,” I corrected him. Attorneys have a strange attitude toward the law sometimes, almost as if it’s flexible, interpretable or even fundamentally flawed. “Let’s get out of –” And then I froze, as a brilliant idea struck my mind with vicious force. “No. Let’s get in here.”

I had it. We’d insinuate ourselves among the neohippies. Find out their secret plans to undercut and repeal Prohibition, then undercut them right back. I would singlehandedly save the Republic and maybe then finally be able to transfer to a more widely respected, less geographically distributed branch of law enforcement.

We liberated conference badges from two hippies passed out in a corner of the lobby and entered the belly of the beast. Our first objective was to conceal ourselves. Fortunately, the conference marketplace included a psychedelic clothing store1 across from a huge array of eye-searing psychedelic art2. My 300-pound Samoan attorney stood out in his charcoal suit, as I did in my sweat pants, muscle shirt and MAGA cap; but after we got him into a tie-die muumuu and me into galaxy leggings and a Tree of Life T-shirt, nobody gave us a second glance.

“Hey, Erowid,” my attorney said, recognizing a booth across the room.

“They’re an online repository of psychoactive drug information and experiences.”

“What a bunch of pathetic losers wasting their lives away,” I scorned.

“…They were awarded $80,000 by Reddit popular vote a couple years ago and were also the subject of a New Yorker profile.”

His contradictions were beginning to stress me out, so I popped another few beta blockers. “Stop distracting me. Focus on what’s important. Right now you and me are the Navy SEALs of the War on Drugs.” As I said it I realized I would need a high level of focus, so I chased the pink pills with an Adderall. “Now let’s get to work.”

When I saw on their schedule board that they had a CLINICAL RESEARCH track, I went cold. The neohippies’ diabolical plan hit me like a ton of bricks. They would use science to establish that this chemical deviltry had valid and important medical uses. Those bastards! Then they would probably try to pursue full decriminalization, just as medical marijuana had presaged legal weed.

Not that there was anything wrong with weed. My terrible enlightenment was such a shock that I decided to eat half the edible brownie I kept on me just-in-case, to soften the blow and smooth out my reaction. I wasn’t federal law enforcement, after all; and in the great state of California, THC was A-OK. Weird to think that once, at some point back in the distant mists of faraway history, like maybe last October, recreational marijuana use had been illegal. What primitive, unenlightened barbarians those people must have been.

We passed the Healing Oasis3; a kratom café; scientific poster sessions discussing the effects of DMT harvested from toads 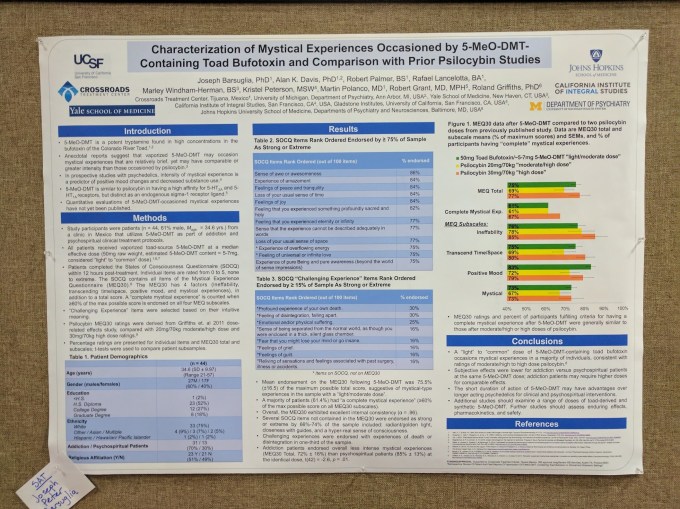 and drug-induced encounters with the divine 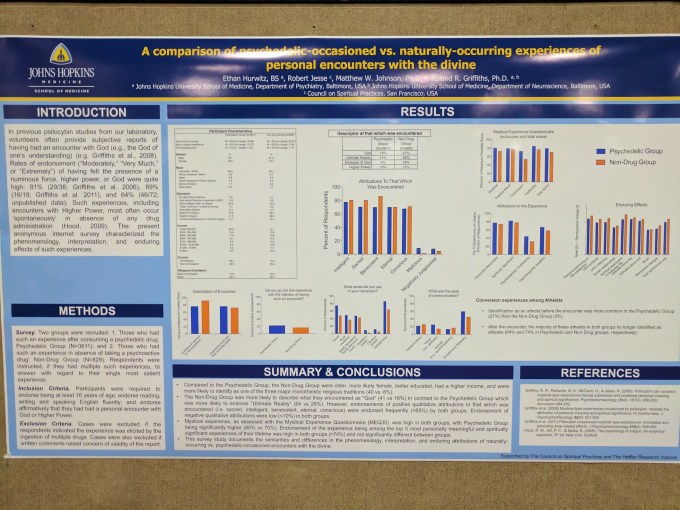 and finally entered the dark heart of the maelstrom — actual scientific talks, wherein highly trained individuals introduced and discussed double-blind studies, peer-reviewed papers. (There were also “Plants” and “Interdisciplinary” tracks with a lot of social anthropology and cultural analysis and documentaries about MDMA and so forth, but, to be honest, most of that crap went right over my head.)

At the first talk we went to, a white-haired man, who I first assumed to be some sort of high-shaman type but who turned out to be the former Distinguished Chair in Pharmacology at Purdue University, gave a talk about “the secrets of LSD.”

It turned out he meant a lot of confusing neuroscience and chemistry — proteins, enzymes, lipids, amino acids, neural transmission signals, stuff like that — but I noticed he mentioned in passing that LSD studies had, historically, been instrumental in the history of neuroscience. In particular, the very notion that variant brain chemistries could be the cause of variant human behavior.

“Neuralink,” my attorney said, as we walked out, our minds spinning.

“Neuralink. Elon Musk’s new company, supposed to build direct brain-to-computer interfaces. Doesn’t seem like such a big jump from studying the mechanics of how psychoactive drugs affect the brain, and our perceptions of reality, to baseline tech for Neuralink, does it?”

“Have another clonazepam,” I ordered him, “you’re getting too wound up.”

But he was out of control. “I mean, all this psychoactive shit is serious biotech too, right? A single dose of psilocybin has been shown to enormously improve anxiety and depression for months in some people, and also help people in palliative care, which is pretty much all people eventually, you know? Studies indicate MDMA can be used very successfully to treat post-traumatic stress disorder, could help thousands of veterans like you, but because it’s illegal you haven’t gotten anything like the help you need.”

“I don’t need that kind of help,” I snapped, although suddenly my recurring back injury was screaming at me with pain, so I dug out a Tramadol, and followed it with an oxycontin just to be sure. “I’m fine. We’re all fine. The whole goddamn country’s having a totally fine time. This is fine.”

“Sure, man, sure.” He held his hands up placatingly. “Good news, though, a phase III clinical trial has been approved. Let’s go up to the Skyline Room. There’s a talk there about rebranding psychedelics.”

This was what we had come for; this was their secret plan to make their evil substances palatable to the world; and yet, somehow, by the time we got up to that 21st floor conference room, my heart wasn’t into subterfuge any more. Instead I found myself staring out to the gleaming spires of San Francisco, at the topped-out Salesforce Building.

“Hey,” my attorney said, “did I ever tell you about the time at Disrupt when Arrington spent like 15 minutes asking Salesforce’s CEO about dropping acid with Steve Jobs? Jobs called taking acid a profound experience, one of the most important things in his life.”

“Prohibition,” I reminded him, “it’s illegal therefore wrong,” but the words felt hollow in my mouth, like a meaningless script. I stared out at San Francisco and wondered if, with the right kind of eyes, someone who wasn’t me could almost see a high and beautiful wave gathering, readying itself to inundate the nation and the world.

1 This is actually true.

3 Psychedelic Science is the first conference I’ve ever attended that had a Healing Oasis; that said, TC Disrupt gets pretty intense at times — maybe we should consider incorporating one too.