Shopify has designed its own hardware for the first time, building out a design team and coming up with a unique approach to the simple card reader, that most basic tool in the real-world merchant’s arsenal. The new chip and swipe card reader makes its official debut at Shopify’s Unite developer conference in San Francisco today, and it’s a device with a superficial simplicity that only hints at how much care went into the design process.

From around 2013 onwards, Shopify began paying close attention to how much of its online-seller customer base began selling in person, via pop-up shops and also via small shops set up in their home towns. That year, it released Shopify POS for the first time, and the key difference in that was the hardware component. Shopify was happy to rely on partners for that hardware piece of the picture, as it wasn’t within its core set of skills.

“We’ve learned a ton over that period of time, in bringing people hardware and scaling point of sale to many tens of thousands of merchants,” explained Shopify VP of Product Satish Kanwar in an interview. “What we’ve seen is the evolution of the retail store as a place that was primarily a first channel for someone, to being a great experiential marketing strategy for people, and just a necessary part of the growth and evolution of any retail brand, whether you started online first or not.” 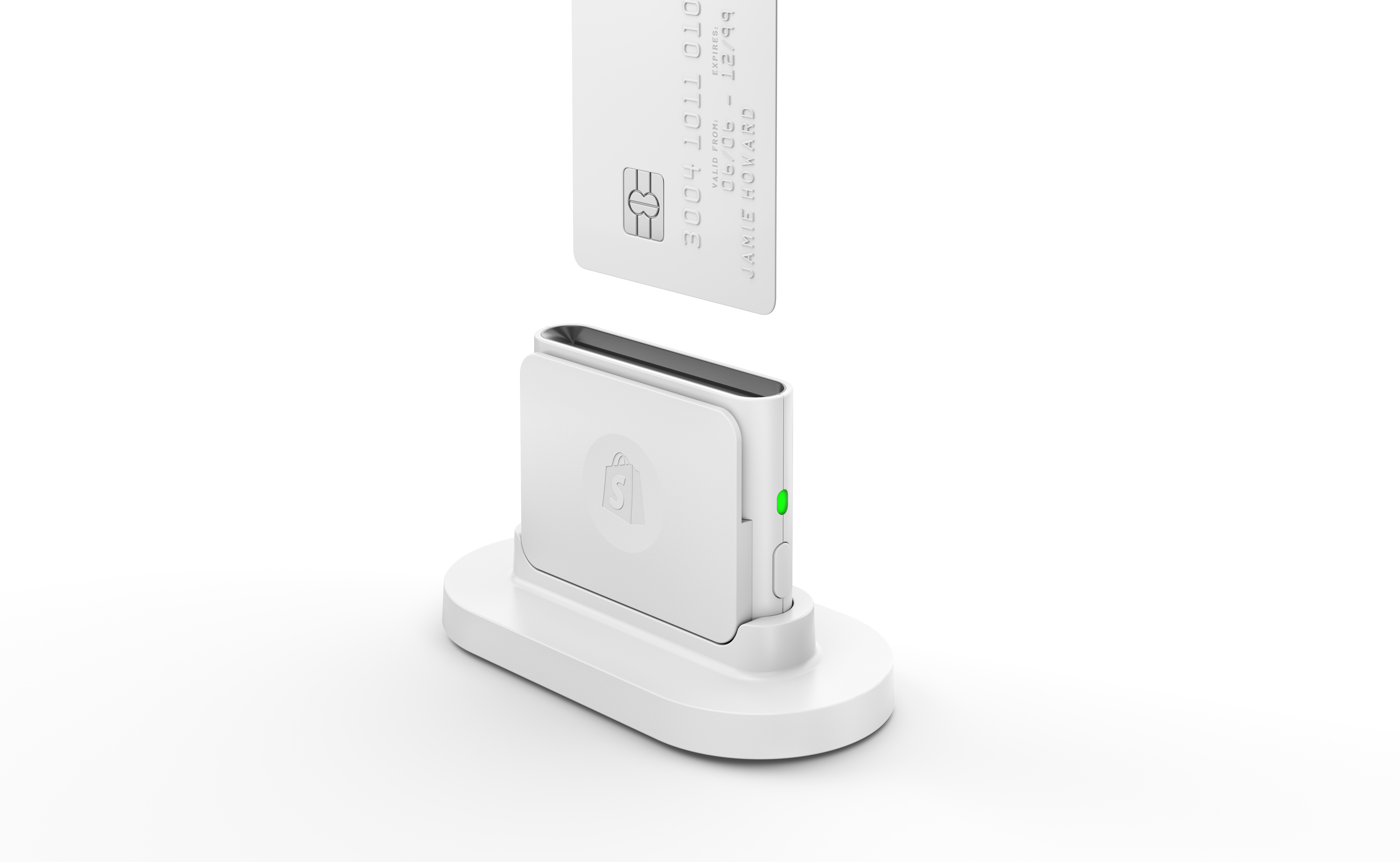 Retail is changing as a result, and that means merchants need a more seamless solution across both online and offline parts of their businesses, Kanwar says. That led them to set up creating their dedicated hardware unit within the company around one year ago, with the aim of taking all the lessons they’ve learned from their merchants’ collective experience with in-person sales.

“What people forget is that it’s not just the merchant that’s touching the hardware, like a cash register,” Kanwar said. “When it comes to a card reader, it’s the shopper that’s interacting with the device and inputting their card as well. What we realized is that it’s really hard to get a good balance of good quality, versatility and something that provides that delightful experience in something that’s also affordable.”

Shopify’s reader is a device designed to cover all those bases, with a detachable reader that you can use one-handed and can handle both swipes and chip-based “dips.” A subtle groove offers a solid thumb rest and Kanwar showed me how a merchant can even use it stacked with their phone with one hand thanks to the groove, paired with a textured surface that won’t slide off the back of your smartphone or tablet too easily. 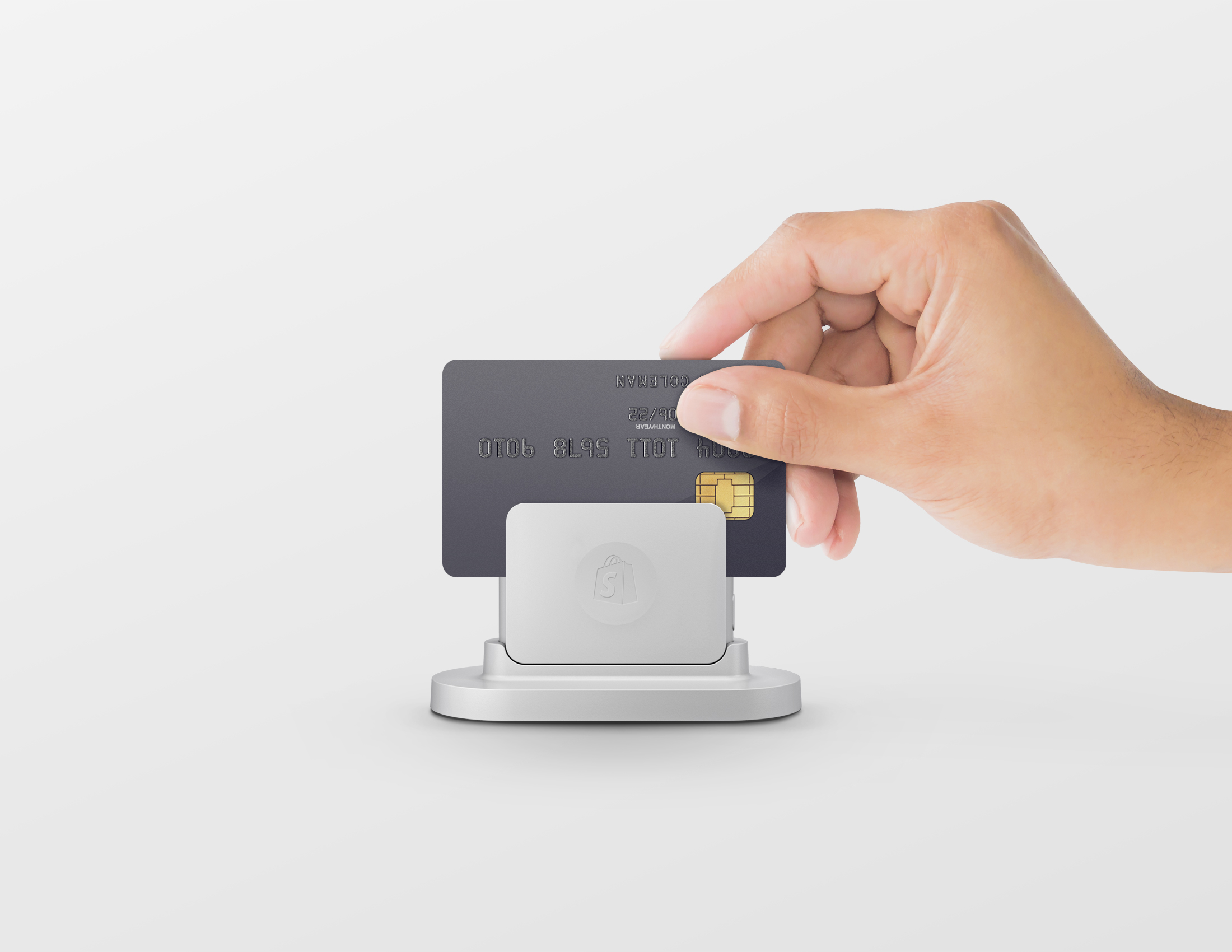 The reader plugs into a base via micro USB, which is also the connector used to plug the base into a power source for charging. The battery in the reader should easily handle a full week’s worth of transactions even if left unplugged, and the modular design is intentionally made to fit with multiple different mounting options to come in the future, in addition to the current weighted base.

All of Shopify’s careful design work will likely remain mostly invisible to both merchants and shoppers, however, if they’ve done what they set out to do; Kanwar notes that the minimalist branding and largely white device is meant to help foreground the in-person shopping experience, rather than the tech that enables it.

Shopify’s card reader will be free, which for merchants might be the most important aspect of its design; that’s if you’re a Shopify merchant without a current Shopify POS solution — others can also buy them for $29 via the Shopify Hardware Store. The accessory supports both iOS and Android, and processes payments with rates starting at 2.4 percent per swipe. It connects to your phone via Bluetooth LE, too, meaning if you happen to be without a headphone jack you’re in luck.

Shopify is offering these for pre-order to its U.S.-based merchants now, and shipping should start in June. Now that the company has a dedicated team working on hardware, it’s likely this isn’t the end of their in-house device design efforts, but Kanwar only hinted at what might be possible in terms of different docking attachments for the reader when asked about the future.