In a whirlwind two months after the service’s launch on Product Hunt, Magic went viral based on its claims to deliver anything; promptly raised a rumored $12 million from Sequoia Capital (with Sir Michael Moritz, KBE joining the board); and then went into hiding as it figured out an actual business plan.

The company emerged a year later with a premium pricing plan and more perspective on what their business actually can be… and then returned to relative obscurity and the basic blocking and tackling of business building.

Well, it’s back again — and this time with Slack!

The company has integrated its text-based, on-demand service-as-a-service into the enterprise messaging monster that is Slack.

A Slack integration isn’t all that special (almost everyone is doing it), but it did give us a chance to catch up with the Magic team and find out how things have been going.

According to them, the answer is “pretty well.”

For those of y’all who don’t remember the back story, Magic launched on Product Hunt in 2015 as a side project for the five Oberlin graduates (holler at your alma mater) who were in Y Combinator at the time working on Bettir, a blood pressure monitoring app.

When Magic took off, the team sidelined Bettir and began working full time on Magic. It took off like a rocket, but the initial business was in no way a guaranteed win.

As our own long-gone-but-not-forgotten co-editor in chief wrote at the time:

According to my Magic operator, between 9 and 13 percent of all Magic orders are delivered by Postmates (Magic founder and CEO Mike Chen tells me the company has not yet calculated that statistic). So Snapguide founder Daniel Raffel, who compared the delivery times of Postmates and Magic, is sort of defeating the purpose. For example, Raffel’s Magic lunch order was also delivered via Postmates, but Magic also uses other on-demand players like GrubHub and Eat24.

The model of taking a loss on orders doesn’t scale. Chen, who studied philosophy and computer science at Oberlin College, estimates that the company breaks even on 50 percent of orders, loses money on 25 percent and profits on 25 percent — which he says is breaking even overall. Operators are supposed to factor in the time they spend interacting with customers and vendors into the Magic charge.

The launch of the Magic Plus service solved that problem, when the company shifted its business model to provide a message-based service that can do anything for someone at a $100-per-hour fee.

Since the launch of that service, Magic has been working to reduce costs through a combination of artificial intelligence and human interactions. The company currently employs roughly 150 people full time to handle the orders that come in.

“In the beginning we thought it was going to be food deliveries,” Chen told me. “It’s become a replacement for a personal assistant or an executive assistant.”

The sticker price for that on-demand executive assistant has come down since the service’s launch in January 2016. Now, one need only a pay a measly $35 dollars an hour to get some mechanical turk or other factotum to do the work rather than hire an actual person to do it full time. Chen assures me that Magic is still profitable at that price.

“We have a positive margin on the transaction,” Chen tells me.

The evolution to a concentration on servicing businesses happened as customers began to use the service more frequently. “What was happening was that people would make personal requests on behalf of their businesses,” Chen said.

As it moves into more of a business service role, the company may find itself butting heads against office management services like Eden or Managed by Q.

It’s also a tacit acknowledgement of just how crowded services-for-services has become (and yes the ouroboros of the absurdity contained in the previous statement isn’t lost on me). Facebook has a messaging platform that can connect anyone to any company to provide services, Alfred will offer you a concierge for personal services.

If you’re willing to have the extension of a corporation listening to every word you say in your home, you can install a Google Home or an Amazon Echo and get them to deliver things to your door. 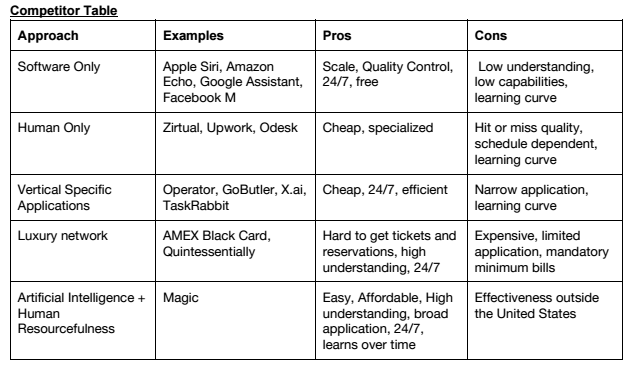 Screenshot of Magic’s own competitive analysis

Silicon Valley is filled to the brim with services companies offering to do things for users that they could pick up the phone and order for themselves, but in a four-hour-work-week world, who has the time for that?