At the F8 conference today, Facebook announced a bunch of updates to its Workplace by Facebook team communications tool, including a slew of new partnerships and new bot integrations, which all show a product that’s maturing to meet the needs of larger enterprise customers.

When Workplace by Facebook launched last fall, it was an attempt to take Facebook and put it into a business context. But working with businesses has a different set of requirements than consumers, and that means working with third-party business software in a seamless way. It’s certainly something that one of the company’s chief rivals in this space, Slack, has recognized and built into its product from the earliest days.

Today’s updates are about bringing that same type of integration, including file sharing, bots and compliance and governance tools, into the Workplace by Facebook experience. This kind of blending has been on the drawing board from the beginning, according to Julien Codorniou, vice president of Workplace.

“Being the communication layer and discovery platform for other services has always been part of the plan,” he told TechCrunch. “Workplace wants to be the app that connects everyone,” he added.

For starters, the company announced integrations with Box, Microsoft, Dropbox and Quip/Salesforce. That means when you share a file in a Facebook group, instead of just a link, you’ll see a thumbnail and when you click it, you go directly to the file for editing or commenting. 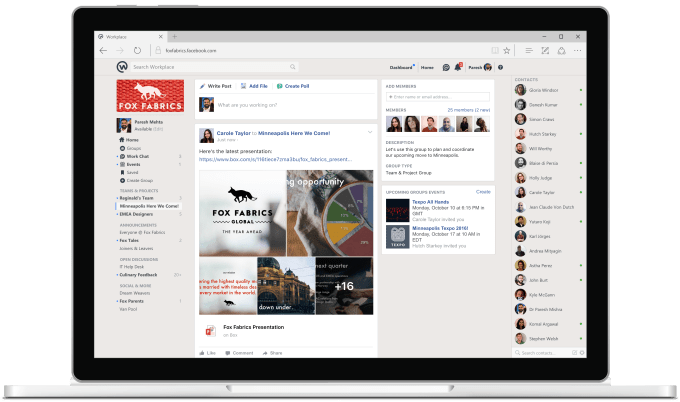 Bret Taylor, CEO and co-founder at Quip, a productivity software company that Salesforce bought last summer for $750 million, says that these kinds of integrations are becoming increasingly important to businesses.

“One of the issues of modern cloud software is the explosion of services in a company. It is exacerbating [the problem of] where does data live and how do I interact with it. The vision is that [these services] can seamlessly interoperate and you don’t have jump back and forth to get the job done,” Taylor explained.

This isn’t exclusive to Workplace, and Taylor acknowledged Salesforce/Quip had similar connections in competing products, but as they are seeing customers using Workplace, they feel they need to be there too. “At the end of the day, if you don’t integrate with the tools your customer use, you’re going to lose a customer,” he said.

Got bots if you want ’em

The company is also introducing bots into the Workplace experience in both Messenger and Group chat, which puts it on par with what Slack has been doing for some time. These bots are powerful entities, which you can call upon to help out. For instance, if there is an equipment problem, you could call on @repairbot to find someone to fix it. The bot can acknowledge your request, locate an available person to undertake the repair and message back the name of the person taking care of it.

This ability to read messages, take actions and send messages is a powerful mix and can allow bots to take care of mundane tasks more quickly than human counterparts. These bots can work in Messenger in a one to one chat environment or Groups in a group chat. 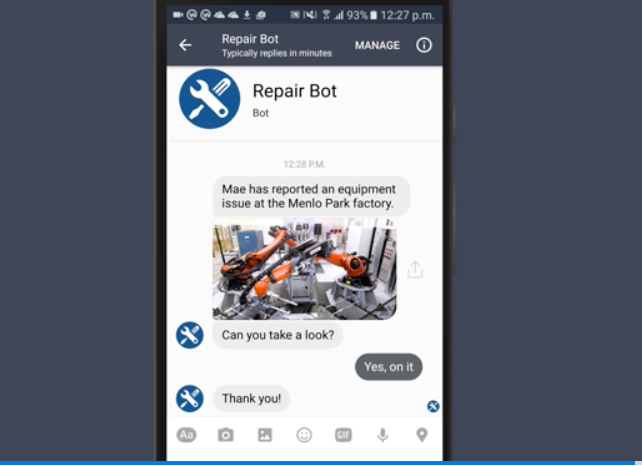 “The reason why we are so excited about custom bots is that we have over 100 bots at Facebook to power everyday experiences,” Codorniou said.

The company is working with a number of bot platforms, including Converse, PullString, The Bot Platform, kore.ai and Avaamo.

One of the big issues facing a company like Facebook as it makes its way into the enterprise is finding ways to link to compliance and governance systems already in place in the company. Without this, it’s awfully tough to gain the trust of IT and security professionals inside large organizations, who might have been conditioned not to trust the Facebook consumer tool.

Facebook seems to have recognized this, but rather than trying to build compliance and governance into the tool itself, it has chosen to partner with some companies that have expertise in the field, which is probably a smart way to go about it.

Those same IT pros, who might not trust this type of tool for starters, will probably be more comfortable with some known entities, rather than something Facebook built itself, at least initially.

Although it was launched just last October, Facebook reports 14,000 organizations using the tool, which have created more than 400,000 groups. As a means of comparison, Slack reports 5 million daily active users.

All of these announcements have been designed to make it easier for Workplace to be an integral part of the company experience and to compete to get a piece of that communications business, but it’s also a tacit recognition that it needs to provide a tool set, partnerships and integrations that enterprise customers are going to demand.