While Uber’s woes take center stage in the U.S., a different on-demand battle that’s been playing out in China is coming to the states.

The battle isn’t over car sharing. It’s not over bus sharing, either, though that, too, is a growing focus for investors and automotive companies that are desperate to understand how cities and transportation are changing. This clash is over the latest wrinkle in urban bike-sharing — dockless bike sharing. And it has founders and VCs around the globe seeing dollar signs, while regulators are wrestling — again — with how to ensure they’re not victims of a trend that seemed to emerge nearly overnight.

“Dockless bike sharing is something that people worry about until they realize it’s a benefit” to society, says Atomico co-founder Mattias Ljungman, who calls the ability to leave one’s bicycle where a trip ends “the real revolution here.” Docking stations are “very complicated,” he says. “Not only do riders need to know where to park their bikes, but sometimes the stations are full. It’s a pain.”

Atomico has already placed a big bet on Ofo, a Beijing-based dockless bike-share company that has so far raised roughly $580 million from VCs at a post-money valuation of north of $1 billion. China-based investors are looking to pour even more into the three-year-old company given its current momentum, suggests Ljungman, citing the more than one million connected bikes it has already placed on city streets in China, and customers who are taking an astonishing 10 million rides per day, compared with the roughly 10 million rides per year that London’s public bike-sharing service powers.

The story is much the same for 16-month-old, Shanghai-based Mobike, which also claims to have more than a million bikes in its fleet and has raised $410 million from investors at a valuation that the WSJ reports is north of $1 billion.

Another Beijing-based bike-share company, Bluegogo, is drafting behind both. Founded a mere six months ago, it has already raised at least $65 million from investors.

Still, China is not the U.S; it remains to be seen if a variation of the model will work here. “Just as China will tell you that things that work in the rest of the world won’t work in China because of its 5,000-year-long cultural history, things in China don’t necessarily work [in the U.S.] either,” says Sean O’Sullivan, the founder and managing director of the venture firm SOSV.

O’Sullivan has been watching dockless bike sharing as closely as anyone. Like a growing number of VCs, he has a horse in this race: New York-based Social Bicycles, or SoBi, which says it was first in producing a dockless bike that features a trackable GPS system and an integrated lock that allows it to be parked at any bike rack in a city.

SoBi founder Ryan Rzepecki launched the company in 2010 after serving 17 months as a project manager at the New York Department of Transportation. There, he says, he was witness to the city’s earliest thinking about bike sharing, before it partnered with Alta, then parent company of Citi Bike. New York is now home to the largest bike-share program in the U.S., but it required years of advance planning that Rzepecki says gave him “great appreciation for how cities work and the things that concern them.”

Among them were “ensuring the bikes would be inspected and maintained, that their docking stations would be kept clean, that bikes would be evenly distributed throughout the city, and that there was data sharing,” says Rzepecki’s then-boss, former New York DOT Commissioner Janette Sadik-Khan, who now advises mayors on urban planning. “It was pretty basic stuff” that had New Yorkers’ best-interest in mind, she adds. “Rogue bike systems,” she complains, don’t necessarily have the same priorities.

“These new companies seem to be using [the bikes] more like marketing vehicles and using the streets for their private gain,” Sadik-Khan says of Ofo and Mobike, which are giving city dwellers more freedom to zip around congested cities like Shanghai, but attracting bad press in the process around bike-strewn pedestrian walkways and bikes piled sky high. “You can create dangerous situations by inviting this tsunami of bikes that could wind up anywhere and everywhere.”

Rzepecki certainly believes they’ve been less thoughtful in their approach than SoBi, which has more than a thousand of its own bikes in Santa Monica, Ca., and Portland, Ore., among other places in the U.S., Canada and Europe.

Most importantly, he says, SoBi has “entered into a partnership with every city where we’re operating,” he says. “Having been on the other side, we understood the importance of being good partners.”

SoBi also uses incentives to manage its fleet of bikes so that “instead of a scavenger hunt to find a bike each day, a user knows that there’s a bunch of bikes three blocks away.” How it works: Users pay per minute, with pro-rated prices ranging from $3 per hour to $8 per hour depending on the city. Most rides last 15 minutes on average, with most trips costing $2 apiece. But riders face extra fees if they lock up a bike outside an area that’s been geofenced by SoBi. Conversely, if a user parks a bike in a particular area at SoBi’s request, that rider is given a credit.

One might think the difference too nominal to pack a punch, but it’s “really effective” in ensuring equal distribution of the bikes, says Rzepecki. Meanwhile, Ofo and Mobike have no such incentives program in place, counting instead on the market to self-regulate. They also barreled into the many Chinese cities without consulting first with local regulators, a move that investors — which include China-based heavyweights Xiaomi and Tencent Holdings — seemed to sanction.

That’s begun to change more recently. “Ofo is working with government,” insists Ljungman. “It’s always looking for solutions.” Rzepecki hints that they have no choice. “Shenzhen and Shanghai are starting to put in service standards to prevent chaos in the streets.” 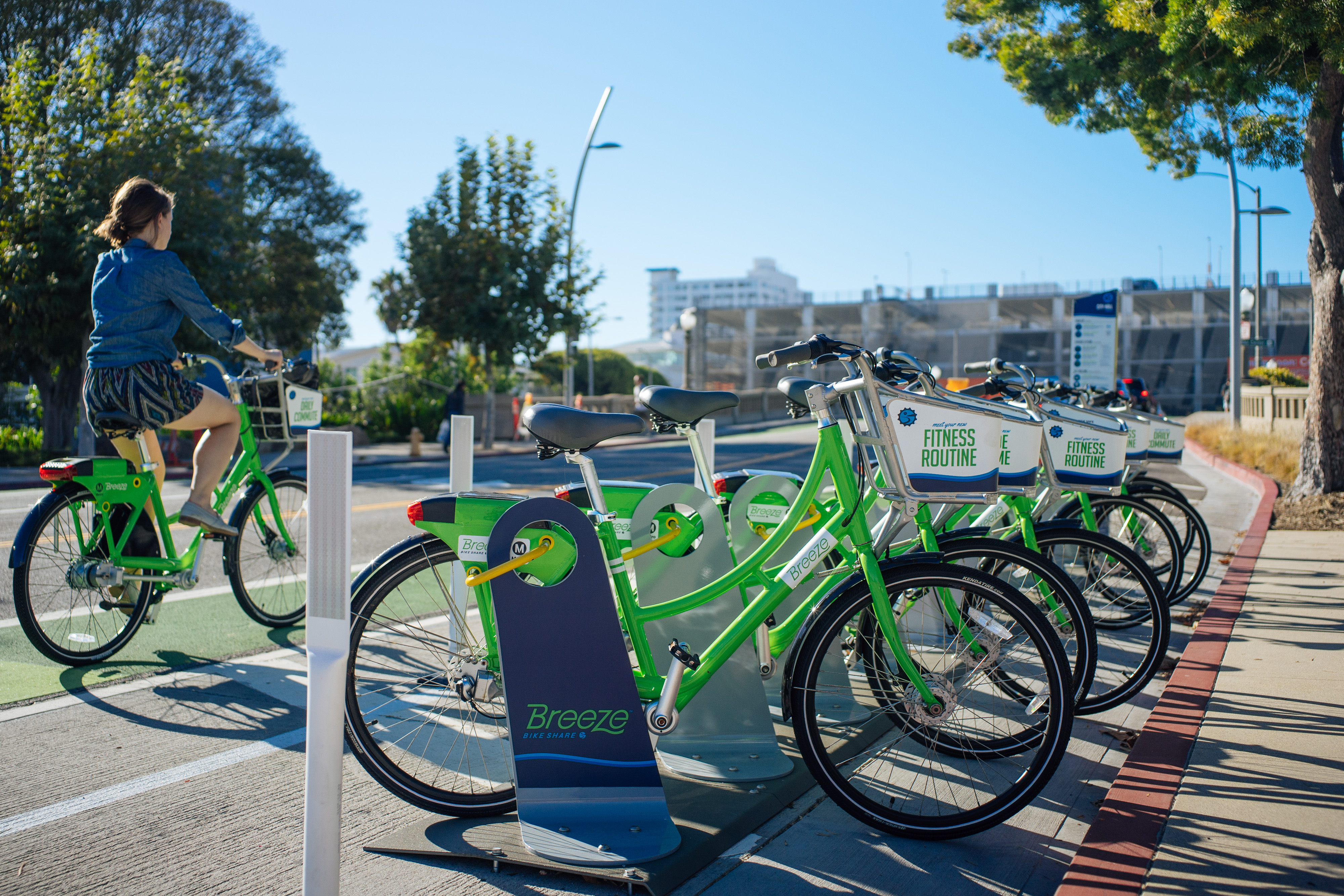 Certainly, cities have plenty of reason to want bike-share programs to work, dockless or otherwise. Bikes don’t produce carbon emissions, they take up less space than cars and riding a bicycle is a heart-healthy activity.

San Francisco, which was caught off guard by plans by Ofo and Bluegogo to enter the U.S., recently proposed legislation around how to obtain and maintain a stationless bike-share permit. (Bluegogo, which initially aimed to park its bicycles in public bike racks, says now it will use bike stations in private parking spaces.)

NACTO, an association of 51 major North American cities, issued a statement earlier this week saying it also welcomes bike-share systems of all stripes, as long as they’re “part of a city’s overall transportation network and vision.” (Companies that have “shown that they are not serious about providing bikes as a real mobility option for people .  . . [but] more interested in media attention and a quick buyout . . . put the public at risk,” it added.)

Dockless bikes make a lot of sense as a last-mile option for commuters, too. Even now, Rzepecki sees a day when SoBi’s bikes are electric and work with fleets of autonomous cars and shuttles to get people to their office doors. Ofo has the same ambitions, says Ljungman, not least because China’s ride-hailing giant Didi is among its investors. In fact, Didi’s customers can already reserve an Ofo bike through Didi’s app.

As with Uber — which envisioned itself as a logistics company from the start — the potential also exists for the bikes to carry more than people. Ljungman says that making deliveries, for example, is “not something [Ofo] has on its radar, but given they’re building a really interesting network and distribution capability . . . the amount of products and services you can attach to that is pretty large.”

Still, it’s easy to conclude that investors — and founders — are getting ahead of themselves in a race to create the next so-called decacorn.

Though Ofo has global ambitions — it reportedly wants to introduce 50,000 bikes in roughly 10 U.S. cities by July — Ljungman acknowledges that the U.S. market will be a tough nut to crack. “You need the right kind of cities. In many places in the world, cities weren’t built around cars. They were built around people walking or cycling or even riding horses,” he notes. “There’s a cultural aspect, too. In Amsterdam, you see lots of bicycles all over the place. They rule the city.” That’s not so in many American cities where bikers represent fewer than 1 percent of all commuters.

The economics of the business appear challenged, too. While bike-share companies insist that they’re making the bikes as efficiently and cost-effectively as possible in partnership with China-based manufacturers, it hasn’t proven a lucrative business to date. For example, Motivate — which bought Citi Bike from Alta in 2014 — now oversees more than 10,000 bikes across bike-sharing programs in 10 U.S. cities and recorded 14 million rides last year, and it still isn’t profitable, says a source close to the company. Presumably, making electric bikes will be even more costly.

And there are shenanigans. According to O’Sullivan, the founders of one dockless bike-share startup met earlier with Rzepecki under the guise of wanting to fund SoBi, which has reached profitability off $7 million in funding to date and is now looking to raise substantially more. They then used their findings to raise money for a new startup of their own.

Asked about the claim, Rzepecki declines to confirm it, saying instead, “A lot of people are entering the market and maybe being a bit more opportunistic in trying to compete. For me, it’s generally a good sign that we have an environment now that’s being capitalized, even if not everyone has the same intentions that we have.”

It’s almost like the second coming of Uber. At least, people seem to hope that’s the case.

“I do think Uber’s bad-boy behavior has emboldened some to also break laws and charge ahead of social consequences,” says O’Sullivan. “They got away with it, and they got rewarded for it financially, despite hundreds of millions of dollars in settlements to state regulators and elsewhere.

“Until Uber came along, I never thought it could possibly have worked. Now others may see it as a model worth copying.”

Additional reporting by (and valuable insights from) Lora Kolodny.