Teamable wants to know your social network. Well, its software does. The reason: it might find someone suited to fill an opening at your company who — no offense to your intelligence — might not necessarily spring to mind.

How does it work? By churning through your contact lists (think Gmail, Facebook, GitHub, any other sources of contacts that employees are willing to share), it finds connections via machine learning. Maybe you know more engineers than you’d realized, for example. Or, when it comes to an effort to hire more diverse candidates, maybe you have more friends or acquaintances from underrepresented groups than you know.

The point, says CEO and cofounder Laura Bilazarian, is that “referrals are a great source for new hires. They outperform most other sources, but until now, it’s been a memory-based process. Maybe you’d come up with one or two names.” Meanwhile, an explosion in both social connections, AI, and machine learning is enabling the company to tap into what it says are the 1,000-plus connections that tech employees tend to have on average across their various online networks.

If it sounds like a potential privacy headache for employees, we get it. But Bilazarian says employees need only provide the platform with their contacts’ first and last names. Teamable does the search work after that, scouring for skill sets, experience, location and more. Also important to note: when it comes up with a match, the employee is asked to make a warm introduction only if he or she agrees with Teamable’s suggestions. “We’re not spamming anyone,” Bilazarian says. “All messaging goes back through [the employee].”

Certainly, companies seem to like Teamable’s calculations. Bilazarian says that more than 90 businesses are already subscribers to its SaaS business, including the payments company Stripe and the ride-share outfit Lyft.

In fact, according to Bilazarian — a Wharton grad who worked in finance previously — the 38-person, three-year-old company turned profitable late last year.

That “atypical” amount of traction for a young startup convinced True Ventures to back it, says partner Tony Conrad. True just led Teamable’s $5 million Series A round, with participation from SaaStr Fund. 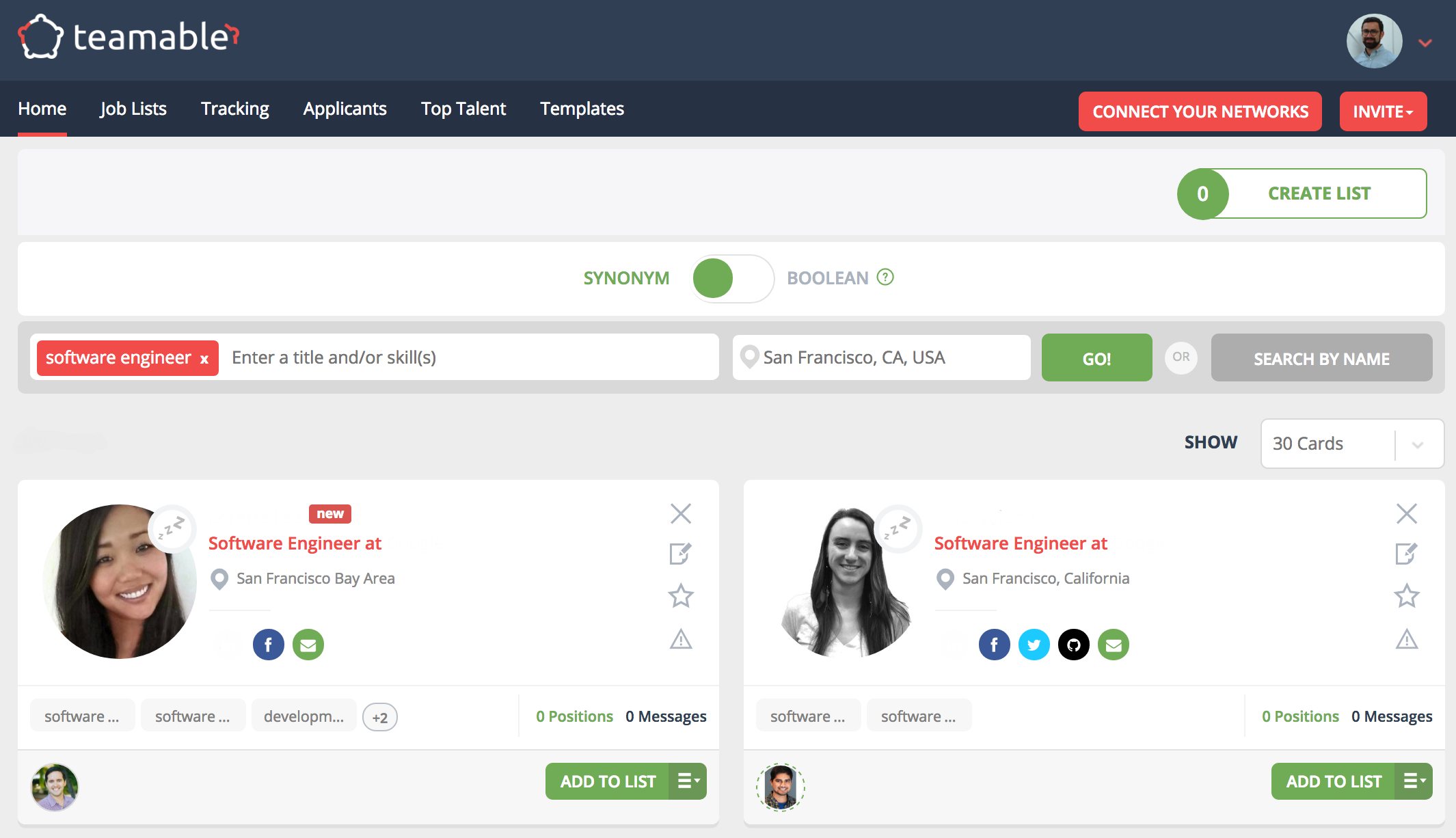 Yet True is even more excited about the company because of that focus on employee referrals, which are the fastest, cheapest, and most effective way for companies to hire.

According to a study by JobVite, it takes 29 days on average to hire a referred candidate, compared with 39 days to hire someone through a job posting and 55 days to hire through a career site. And companies that use employee referral programs have average retention rates of 46 percent, compared to the 33 percent retention rates of organizations that only use career sites.

“Companies want their employees to recommend open positions to their friends, but it’s awkward to push employees to become recruiters,” notes Conrad. Teamable “takes away that friction by scouring employees social networks automatically and making it a one click, ‘Hey, this friend of yours looks like a potential fit, want to send them a note?'”

So far, Teamable has largely focused on engineering hires and on the tech sector more broadly — a product of the company being based in San Francisco, says Bilazarian. (The company also has a second office in Yerevan, Armenia.)

Despite competing in an increasingly crowded market for recruiting software, it sees opportunities to expand quickly. Says Bilazarian, “We’ve worked with hedge funds, investment banks, and healthcare and cancer research companies. What we’re doing works in any industry.”

Above, the company’s cofounders in Yerevan, Armenia, where they have a second office. Pictured, from left to right: VP of engineering Vazgen Hakobjanyan, chief architect Hovhannes Nurijanyan, CEO Laura Bilazarian, VP of product Meruzhan Danielyan.