Walmart.com is preparing to launch a new feature called “Pickup Discount” that will lower the prices on, soon, up to one million online-only items if the customer chooses to pick up their order at a local store instead of opting for shipping. The feature is said to be inspired by the Smart Cart technology developed by Jet.com, the e-commerce startup Walmart acquired for $3 billion last year.

Jet.com’s Smart Cart system offers a variety of ways shoppers can save on their purchases. In some cases, it highlights items that can ship together for less, through an integrated understanding of the underlying logistics relating to where items are warehoused and proximity to the customer. Jet may also incentivize customers to waive their right to return or use a particular payment method to bring the prices down.

At the root of the system is the idea that Jet could understand where the costs are in e-commerce, be transparent about those costs with consumers, then pass the savings along at checkout when the customer takes advantage of the Smart Cart system.

That same spirit of transparency is Walmart’s goal with its Pickup Discount option, which starts on April 19 across Walmart.com.

Initially, the feature will be available on around 10,000 online-only items — meaning those that aren’t sold in stores, but that would have to be shipped to either a store or a customer directly. By the end of June 2017, Walmart says the discount will reach more than 1 million of the site’s most popular items, excluding those sold by its third-party marketplace. 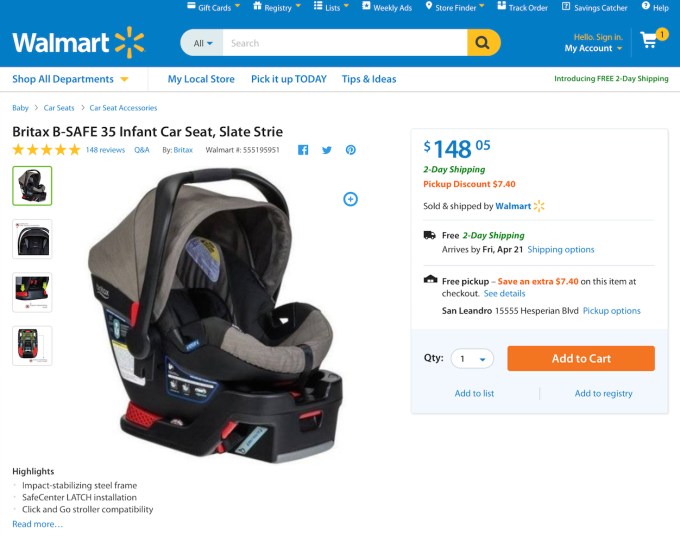 The discount will be highlighted on the product’s detail page, when available.

Pickup Discount is meant to leverage Walmart’s existing delivery network, which includes a fleet of more than 6,700 trucks delivering products from its 4,700 fulfillment centers. Simply put, it costs Walmart less to ship to its stores than to its customers.

However, Walmart says that it’s not lowering prices in an effort to boost its own bottom line. Whatever it saves, it’s giving back to the customer, is the claim.

“It’s really meant to be neutral with respect to the financials of Walmart, with all the benefit being passed on to the customer,” notes Walmart’s e-commerce head Marc Lore, previously founder of Jet.com. “Our view is that we don’t  want this to be necessarily a more profitable channel than e-commerce. The idea is that there’s a certain profitability in the e-comm channel, and to the extent that we could save money relative to that, we’d share that with customers — that’s how we’re thinking about it,” he notes.

That said, the launch of the new discount option could help Walmart bring online prices down even further, which ultimately aids in its battle with Amazon. If its top-selling items can be bought for less than elsewhere, that could help to increase sales. On the customer’s side, pickup is not as difficult as it would be with other e-commerce retailers — there is a Walmart store within 10 miles of 90 percent of the U.S. population.

Today, customers have to go inside the Walmart store to pick up their items, but Walmart has been developing a curbside pickup option for grocery orders. Its Online Grocery Pickup service is now in 600 stores, with 500 more coming this year. It wouldn’t be surprising to see Walmart offer curbside for some of the smaller online sales in the future, given that most of the kinks have already been worked out — ranging from staffing to alerts to even the parking spaces needed to serve the pickup customers.

In the near term, though, Walmart has been testing a “Pickup Tower,” which it likens to a vending machine for online orders. Inside a giant, in-store tower are tons of packages that customers retrieve using their order number. The retailer says the test of Pickup Tower has been successful, so it’s rolling it out to additional locations in the months ahead. (Walmart declined to share how many, but there is one in Rogers, Arkansas to start.) Following the launch of Pickup Discount, Lore says other Jet.com-inspired savings features will also make their way over to Walmart.com, but declined to offer specifics.

“It’s going to come in pieces over time,” Lore says, speaking as to how Smart Cart will make its way to Walmart.com. “It’s not all going to happen at once — just elements and pieces of it that are going to hit,” he adds, saying more features are expected to arrive in “the next few months.”

Pickup Discount is going live in all stores — more than 4,000 total locations — in the contiguous U.S. later this month.