It’s fair to say the smartphone camera has become the digital tool of most use, rendering the average person’s camera roll essentially a memory buffer where carefully composed photographs rub up against snaps of receipts, funny stuff you saw on the street and fancied sharing with friends, and, sometimes, snippets of text you came across in a (paper) book and wanted to make a note of. Snapping a photo in that moment is a stand in for the lack of real-world copy and paste.

And it’s the latter kind of photo (text quotations) that the founders of smartphone app Postepic want to liberate from this unstructured jumble of visual data. Indeed, the first version of the app, released last year as a bootstrapping side-project by a bunch of book-loving friends after they graduated from university in Poland, was just a basic way for them to organize and share photos of the quotations they had cluttering their camera rolls.

“We started this project as we wanted to build something together,” says co-founder Łukasz Konofalski. “We all share a passion for books and were used to sharing quotes and books recommendations between each other. We came across some reports that showed that in Poland in 2016 only half a book will be read on average, so we also wanted to support readership in general by building a bridge between traditional books and mobile world.

“Two things really surprised us when we finally launched it in June 2016: the number of new books worth reading we discovered by simply sharing quotes with each other; and a very warm reception we received from the developers and users communities alike. We have received volumes of valuable feedback from them — and got back to work.” 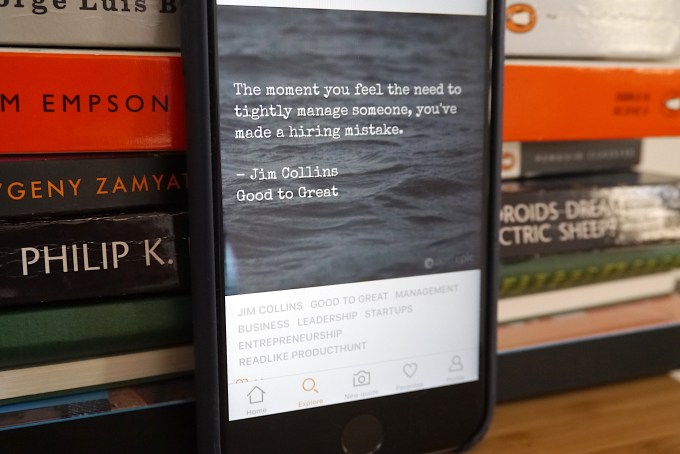 Version 2 of the app, which launched this week, turns a basic idea into an app that has enough form and function to feel appealing to use. The core additional feature is optical character recognition (OCR) — meaning that instead of uploading and sharing ugly-looking (and hard to read) chunks of raw page text, i.e. in their original photo form, Postepic users can now lift the words off the page, capturing and editing the text and its visual presentation by choosing from a selection of fonts and backgrounds.

The final result presents the text snippet inside a square frame, in a way that’s both easy to read and visibly pleasing (for an example of how utilitarian quotes looked in v1 of the app see the image at the bottom of this post). So Postepic basically lets people turn a favorite quote into an easily shareable unit of digital social currency. Aka, an ‘Instagram for book quotes’.

Last year Facebook added a feature aimed at enhancing the impact of the text statuses being shared via its platform, giving users the ability to add colored backgrounds to their text updates to make them more visual. And with so much visual noise being injected into messaging and communications apps, this is hardly surprising. Point is, if you want something to stand out in the age of Instagram Stories (Snapchat Stories, Facebook Stories, WhatsApp Stories… etc etc), it has to look right as the bar for being noticed keeps getting higher.

And with all this visual noise clamoring for our attention, it can feel like the written word is being forgotten or overlooked as people ditch a thousand words in favor of sharing a few photos. Yet a well-turned phrase has the power to be both arresting and enlightening, as well as a hint of greater depths lurking within the full work. So given how much attention has been (and continues to be) lavished on visual forms of communication — from photo filters to selfie lenses to style transfer — there’s arguably space for a clever social sharing app that brings the power of the written word back into focus.

Notably, Apple’s new social video sharing app Clips includes an auto-captioning feature. That’s great for accessibility, but also a reminder that words-as-text still have power and — with a little technological automagic — can be effortlessly edited back into the selfie frame.

Postepic is not the first app to take a shot at wordy snippets, though. Others have tried to build an ‘Instagram for book quotes’ — Quotle, for example — but no one has yet managed to generate significant momentum for the concept. It might be because sharing book snippets is inherently more niche than sharing photos (it’s certainly more bounded, given language barriers). Or because no one has made a slick enough version to attract more mainstream appeal.

Postepic’s v2 app seems to beat Quotle on OCR speed. And because it’s chosen to fix the sharing format as a square its content inherently feels better groomed for social sharing vs the more wordy/text-heavy Quotle. (Although, on the flip side, Postepic’s ease of use and more formulaic format might attract a flood of cliché sharers and drive down the quality of discoverable quotes.) But clearly the founders’ hope is that the uniform sharing format sets Postepic up to benefit from viral uplift if users share watermarked quotes to their larger follower bases on platforms like Instagram (as other apps have). Time will tell if they can make it catch on.

It’s certainly still a fairly unformed thing at this stage, especially given the size and nature of its early adopter community — having only clocked a few thousand downloads for its MVP v1 via a launch on Product Hunt. So even though the team has curated a bunch of quotations themselves to populate the app, you’re more likely to find quotes about scaling a startup than lines from a Shakespearean sonnet. But the core function of v2 has been executed well, within a clear app structure. So it’s super simple to capture, edit and share nicely presented quotes.

Quotation length is capped at 600 characters to ensure readability (and curtail any copyright concerns). Photo backgrounds are also limited to a handful of generic shots and textures offered within the app — at least for now, to avoid users uploading inappropriate imagery, says Konofalski (on that front, remember Secret?). While the OCR tech supports ten languages at this point: Chinese, English, French, German, Italian, Japanese, Polish, Portuguese, Russian and Spanish.

The app also lets you tag quotations for subject matter and to add sources (a requirement if you’re making a quote public). Using these labels you can then browse and search quotes, while a favorites feature lets you curate a like-list if you spot quotes shared by others that you like. And if you don’t want to share the quotes you create with the crowd you don’t have to — you can keep individual quotes private and just use the app to create an organized, visual library of the best bits from the books you’re reading.

On the community front, the main feed of Postepic is an assorted jumble for now, showing a stream of non-topic sorted ‘trending’ quotes that Konofalski says turns over every few hours based on what others are liking. Currently there’s no way to follow other users to customize what you see here but that’s down to how nascent the community is. “Our goal is to offer a solution that many content and photo sharing apps use: to give users a choice to pick their favorite genres and authors to adjust their feed,” he says. “Additionally, we want to launch a functionality of following other users, so their posts show up in user’s feed… [but] decided to postpone the functionality… until we reach a community size that would warrant this.”

Postepic does also support social sharing to other platforms, as you’d expect. Though this doesn’t always work as you’d imagine. For example, testing sharing to WhatsApp the app merely created a generic text message with a link to view the quote in Postepic, rather than including the visual form of the quote in a WhatsApp message template (though this is likely a WhatsApp restriction on sharing from a third party app). A basic workaround is obviously to screengrab a quote and upload it manually where you like as a photo. Sharing to Twitter incorporated both the image and a text message with a link when I tested it. Konofalski says that with most “well known apps” it will automatically import/drop an image into the other app.

The app is free to download (and iOS only for now), and while the team says it has a few ideas for potential monetization down the line — such as hosting pre-launch book campaigns, or offering writers a subscription-based platform to connect with fans — the focus for now is fully on building up the size of the community to try to reach a “critical mass” of readers. 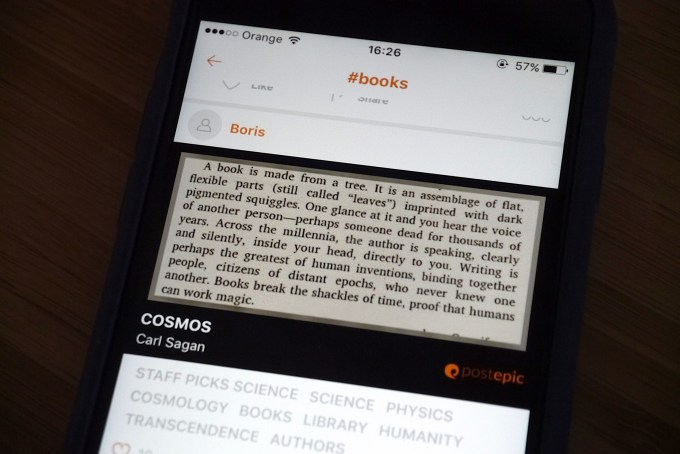