This week, a massive international array of the most powerful radio telescopes on the planet set its sights on the most camera-shy subject of all, the black hole. Badassly known as the Event Horizon Telescope, the global web of telescopes seeks to capture the first image of the supermassive black hole at the center of the Milky Way.

Normal radio telescopes aren’t capable of seeing the closest known black hole to Earth, affectionately known as Sagittarius A*, though at 26,000 light years away, it isn’t exactly close. Researchers have gazed at the suspected black hole for years, so at least they know where to look — you can’t exactly find these things on the fly. Paradoxically, the rim of a black hole is actually extremely bright, as soon-to-be black hole food heats up while sliding toward the event horizon, nearing the point of no return. That’s how scientists are able to locate a black hole’s neighborhood, but to really get a good look isn’t half as easy.

While it isn’t unusual for a radio telescope to actually be comprised of a whole bunch of telescopes in something known as an array, the Event Horizon Telescope (EHT) takes that to the next level, combining a collection of the world’s most sophisticated telescope arrays into one seriously powerful mega-array.

Those telescopes are located all over the world, from the Atacama Submillimeter Telescope Experiment in Chile’s northern desert to Hawaii’s James Clerk Maxwell Telescope on Hawaii’s Mauna Kea. The collaboration even includes the South Pole Telescope, located near the southernmost point on the planet. Their spacing around the globe is a feature, not a bug — maximizing the distance between the mega-telescope’s component parts effectively ups the resolution of the resulting combined image. 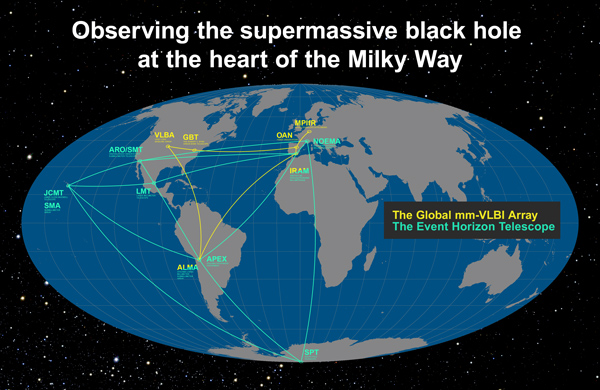 Even with the international collaboration, it’s a tricky task. Looking for an event horizon is like looking for a needle in a haystack, except the needle isn’t visible at all — you can only just barely discern its subtracted outline in the surrounding hay. It isn’t a search for nothing, but rather a search for the edge of nothing. (Whoa.)