Microsoft is getting into the “fun camera app” game with a new iOS application called Sprinkles, which has now earned a featured spot in the “New apps we love” section of the App Store. The gist with Sprinkles, clearly aimed at a teen audience, is to offer a variety of traditional photo decorating tools like stickers, emoji and captions, but leverages Microsoft’s machine learning and A.I. capabilities to do things like detect faces, determine the photo subject’s age and emotion, figure out your celebrity look-a-like, suggest captions, and more.

These tools have been put to use before in other consumer-facing web projects from Microsoft, like CelebsLike.me, which shows your celebrity doppelgängers, for example, or How-Old.net, a site from Microsoft’s machine-learning team that tries to guess your age.

With Sprinkles, these sorts of tools are integrated into a new photo-editing experience instead, where Microsoft hopes to cater to the same crowd that’s obsessed with Snapchat’s flower crowns and puppy faces. 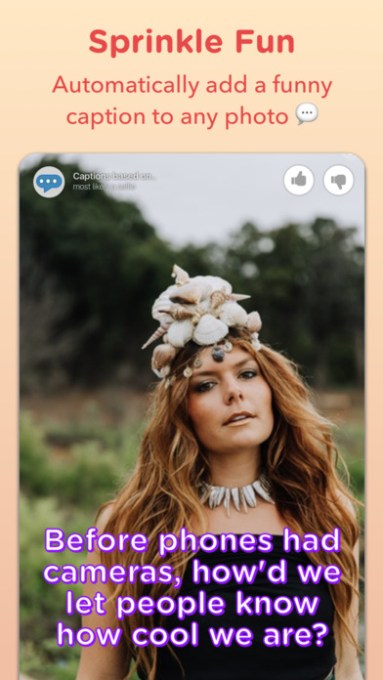 The new app leverages facial recognition techniques to properly overlays decorations like hats or mustaches, as well as its guesses about the subject’s age and celeb look-a-likes. It uses object recognition to understand what’s in the photo, or it can tell if you’re smiling, and then suggests relevant captions. (For example, a scowling face photo prompted the caption “turn that frown upside down.”)

And it can suggest captions and stickers based on factors like time or location where the photo was taken. (E.g. its caption may include Monday jokes for photos snapped on a Monday.) 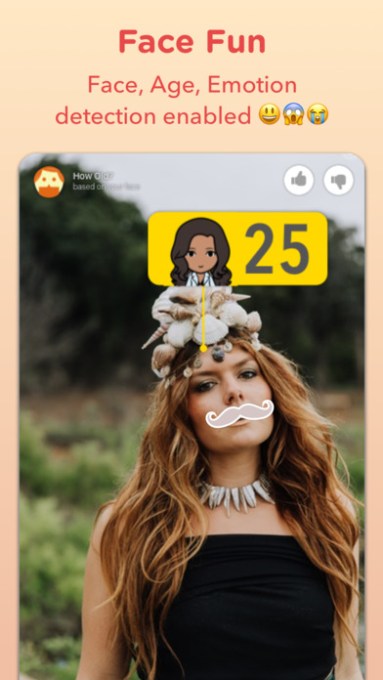 You can swipe through its various suggestions – including props, caption ideas, age suggestions, and more –  to pick those you like, or you can manually decorate your photos with stickers from the web, emoji (sourced from EmojiOne), or your own text.

Naturally, the resulting image can be saved or shared with friends, however you choose, including over messaging, Facebook, Twitter, email and more.

This is not Microsoft’s first attempt with iOS camera apps, to be clear. The company had previously released Microsoft Selfie, a competitor of sorts to FaceTune, which helps you smooth out your selfie photos; and it introduced Microsoft Pix, an A.I.-powered alternative to the default camera app that enhances photos.

However, Sprinkles is the first to really aim young, with an app that’s a bit derivative in terms of its inspiration (decorate your photos!), but also cleverly aggregates a lot of the silly but fun technology Microsoft before showcased only in its standalone side projects. Sprinkles similarly feels like just another side project that’s meant to act as a demonstration of its technology. (But it was also released on April 1st, so…April Fool’s to anyone taking it seriously?)