Nearly a year ago, Twitter announced it would begin distancing itself from the requirement that all tweets could only contain 140 characters by no longer counting some things – like media attachments or @ replies towards the character count. However, it didn’t begin testing the change with @ replies until last fall. Today, Twitter says this change to replies is rolling out to all users across the web, iOS and Android.

As a refresher, Twitter was originally designed as something of a public text messaging service. SMS messages are limited to 160 characters, so Twitter went with a character limit of 140, thinking to leave room for a username ahead of the tweet.

However, the @usernames in Twitter replies did end up counting towards the 140 characters, as did other media attachments, including photos, GIFs, videos, and polls. That left precious few spaces for a user’s actual thoughts.

This also led to informal conventions like “tweetstorms” for sharing longer thoughts, and “Twitter canoes” – large, multi-person conversations which eventually break down because so many people join, there are no characters left to actual post responses. 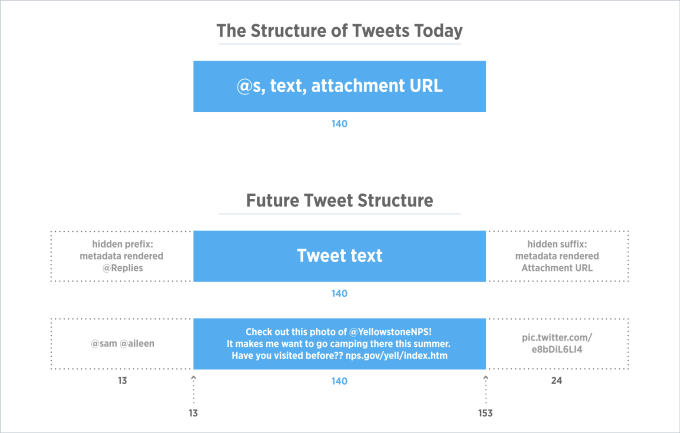 Twitter has been trying to rectify the problems with its 140 character limit over the past several months by changing its user interface and lifting various technical restrictions. It already stopped GIFs, images, videos, and quote tweets from counting towards the 140 characters. (Links still do count).

With today’s change to replies, Twitter’s interface on web and mobile will now display those you’re replying to above the tweet text, instead of within the tweet, which frees up more characters for your thoughts.

You can tap on this “Replying To” field to see who’s in the conversation and make changes to the reply list, if you choose. This is done by unchecking the checkboxes in the small pop-up that appears on the screen after tapping this field.

The change also aims to make reading longer conversation threads easier, because this “Replying To” field is much smaller and not in the tweets themselves. That way, you can focus on reading the actual posts, without having to first note the usernames.

There are some caveats to be aware of here, however. On the tweet Compose screen, for example, this “Replying To” field is fairly small. It could be overlooked if you’re in a hurry – making you think you’re writing a fresh tweet, when really you’re participating in a conversation.

That’s important because replies are a second class kind of tweet. Not everyone sees your reply appear in their Timeline, even if they follow you. Instead, they only see the reply if they follow both you and the recipient.

Replies are also tucked away in a secondary tab in users’ Twitter Profile page, “Tweets & Replies.” (Twitter earlier this month updated users’ profiles on mobile to display replies in the separate tab, like they are on the web.)

Because of the lower visibility for replies, users started putting a period (“.”) ahead of any reply they want all their followers to see, where they were referencing someone else’s tweet. This, too, has become something of a Twitter convention.

In addition, because the usernames of those you are replying to are no longer in the tweet’s text, Twitter suggests that you Retweet your reply or use Twitter’s Quote Tweet feature to cite it. That is, if you start a reply, you can’t really insert a dot into it anymore.

The company wants to eliminate the use of the dot, but it doesn’t seem like that functionality will actually break down entirely. After all, if you choose to start a new tweet with a dot followed by an @ mention, they’ll still see it as will everyone who follows you.

We're changing replies so that you have all 140 characters to express yourself.

Third-party developers should be ready for this change, as Twitter communicated with them in May. However, we will need to wait until it rolls out publicly to see which developers then update their apps for this shift. (Tweetbot’s app is not ready, we confirmed with developer Paul Haddad, who says he’ll test this after it’s live and release updates in the future.)

The change to replies marks an end of an era for Twitter. The company helped to popularize this format and bring it into the mainstream. Today, using the “@” symbol to mention someone is supported across a range of services, including Facebook, Instagram, Tumblr, LinkedIn, Slack, and even Outlook, among others.

While Twitter is making these changes as a means of trying to simplify its service for users, it’s really just swapping out one set of rules for another. And that can be super confusing. TechCrunch editor Matthew Panzarino even encouraged Twitter not to go this route.

Some have argued that Twitter should lift the character limit altogether – perhaps just truncating longer posts under a URL. But that would make it more difficult to read tweets in longer conversations, because of all the clicking.

Twitter says during its tests of the new format, more people engaged with the service. The updated format will arrive in the most recent versions of the iOS and Android mobile apps, and on the web. Some will see it now and others will see it shortly after.