Will you enjoy the new version of Ghost in the Shell? Depends on what you want when you go to the movies.

If, like me, you’re mostly hoping to see something new, well, you’re in for a treat: This is one of the best-looking science fiction films in years. Yes, many of the shots were clearly inspired by the Japanese film, but director Rupert Sanders and his team have translated those animated visuals into a lovingly detailed mix of live action and CGI.

And while this new Ghost in the Shell certainly draws from its manga and anime predecessors, it seems even more inspired by Blade Runner. Of course, any movie depicting a gritty, cyberpunk-y city sits in Blade Runner‘s shadow, but this one doubles down on the debt, crowding its skyline with enormous holographic advertisements — an obvious echo of the giant billboards that dominated Ridley Scott’s futuristic Los Angeles.

Somehow, though, Ghost in the Shell doesn’t feel purely derivative — it’s updated Blade Runner‘s oh-so-’80s mix of rain, steam and neon into something more that feels more contemporary, with bright splashes of comic book-y color that almost overwhelm the screen.

And like Blade Runner, the movie’s best ideas are conveyed visually, rather than in the script. One of the most compelling elements is the way that almost every character has been altered cybernetically, but for the most part, no one makes a big deal about it. Just seeing the kind of future that Elon Musk might envision is a million times more thought-provoking than endless conversations about “Where do you draw the line between man and machine?” and “What makes us human?” 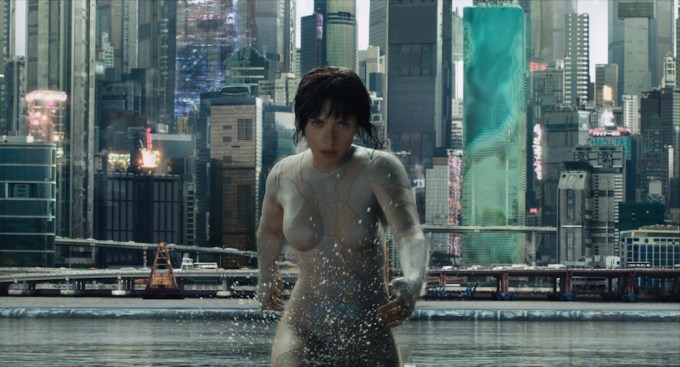 On the other hand, if you want a good script, you’ll have to keep looking. While most of Ghost in the Shell‘s best scenes (the violent, slow-motion ballet that kicks off the film; an eerie raid on the villain’s headquarters midway through) are wordless, you also have to make it through annoying moments when characters talk tediously on and on about grand abstractions like Humanity and The Soul.

Perhaps those scenes would be more forgivable if the script had anything interesting to say about this cybernetic future. After all, the main character Major (played by Scarlett Johansson) is basically a human brain connected to a robotic body, so you’d think the movie would find time to explore how much of Major’s human self survives without her old body, or how much free will she retains despite being literally programmed by her corporate masters.

But no. All we get are those clunky conversations that never lead anywhere, followed by a final act that drops the bigger questions entirely so it can focus on action (which is perfectly enjoyable), strained attempts at emotion (less enjoyable) and establishing a new status quo for any sequels (eh).

Plus, the script’s lack of subtlety makes it all the more glaring that it pretty much ignores the issue that has dominated so many discussions of the film — namely, the fact that this is a Japanese story with Japanese characters that’s been adapted into a Hollywood film with white leads.

To be clear, Ghost in the Shell is hardly the first movie to “whitewash” Asian characters. But the fact that this is still happening, and that it’s happening to such a high-profile and beloved Japanese property, seems to have led to a particularly intense backlash.

How does the movie deal with the issue? Mostly by not talking about it at all. 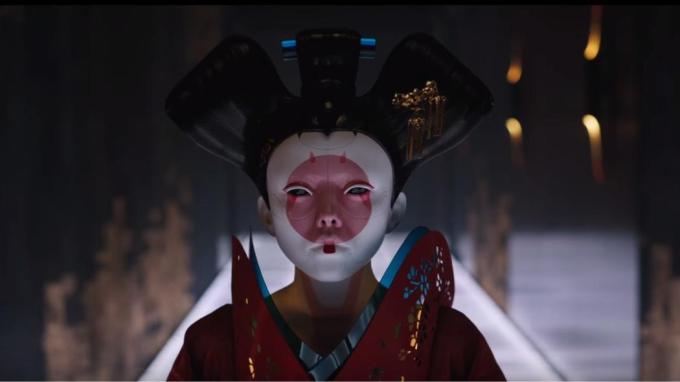 It does depict a cosmopolitan city filled with characters of many races, and a law enforcement team at Section 9 (where Major works) that’s similarly diverse. So the filmmakers might have been able to claim “color blindness” — except, of course, that the biggest roles have gone to white actors. (The only real exception is the casting of legendary Japanese director/actor “Beat” Takeshi Kitano as the leader of Section 9. And yes, he does get to kick ass.)

Since Johansson and her co-star Michael Pitt (who plays the mysterious villain Kuze) both deliver solid performances, I might have been able to stifle my reservations about the casting, just as I’ve done with other Hollywood movies.

Unfortunately, in a late-film twist, Ghost in the Shell actually doubles down on the whitewashing in a way that I can’t reveal here without spoiling things. (If you really want to know, knock yourself out.) What I will say is that the movie kind of acknowledges the problematic casting by using a head-clutching reversal of Get Out … and then it tries to sweep the whole thing under the rug. It raises all kinds of questions, and then seems to hope that you immediately forget them.

So despite how much I enjoyed Ghost in the Shell, it’s hard not to see it as something of a missed opportunity. And despite all the creativity and skill that went into the production design, the movie also serves as a reminder that in a few key ways, Hollywood’s imagination remains severely limited.