Preston Silverman got the idea for Raise.me, a startup that has created a clever new way for students to receive financial aid, while working as a volunteer at a school for untouchables in India called Shanti Bhavan.

Taking a break from his job at a strategic consultancy that focused on emerging markets, Silverman was convinced that the educational system in the U.S. was just as broken as the one he was seeing in India and realized there had to be a better way.

For him, the issue was a misalignment of interests and incentives. Everyone knows that a college student these days may graduate with a near-crippling amount of debt — on average about $37,000 per student. But even as most students and graduates begin their adult lives struggling under this debt burden (which may or may not pose a significant risk to the entire U.S. economy), colleges are giving out more than $50 billion in scholarships and grants.

The problem, Silverman saw it, was that the $50 billion is being doled out among a smaller, self-selecting applicant pool because most students don’t even bother applying to some colleges or universities that would give them money — for the simple fact that they think those same colleges are too expensive to attend.

So kids aren’t applying to college because they don’t think they can pay for it at the same time colleges are trying to find worthy candidates to receive financial aid.

It’s that Catch-22 that Raise.me hopes to break. And it’s the company’s approach — having colleges and universities (including my alma mater, Oberlin) award “micro-scholarships” for academic and extracurricular achievements throughout high school rather than doling out lump-sum awards after a student applies to their school — that has attracted $12 million in new venture capital financing to expand the service nationwide. 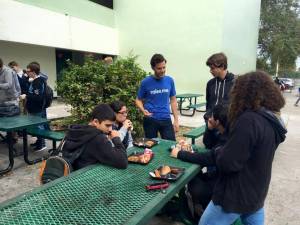 Raise.me makes its money by charging colleges for its services, and colleges are more than happy to pay up, according to Silverman.

“[Colleges] are already awarding over $50 billion in aid and spending billions more on marketing and outreach and we’re giving them a much more effective way to allocate their aid resources,” says Silverman.

A clutch of venture capital firms, led by new investor Redpoint Ventures, alongside GSV Acceleration and previous investors Owl Ventures, First Round Capital and SJF Ventures, participated in the $12 million round.

Through Raise.me, there are 650,000 high school students in every state in the country using the platform. And 19,000 counselors in half of the nation’s high schools are using the scholarship service to encourage admissions into more than 225 schools in the country, including Northeastern, NYU, ASU, Penn State, Georgia Tech and Tulane.

Students don’t have to pick and choose which school they want to receive the aid from, as they proceed through their high school career, schools provide monetary awards for things like good grades or other academic achievements that accrue throughout high school.

On average, students can expect to receive $20,000 in financial aid to a college, which they earn if they apply and are accepted.

Since it was founded in 2012 and began its first pilot in 2013 in 10 schools around the country, Raise.me has helped colleges award nearly $1 billion in student aid packages.

And unlike other venture-backed companies that are seeking to circumvent the traditional college education with trade schools emphasizing coding or computer science, Silverman and his company are firm believers in the value of a four-year college education.

“That’s… something that’s top of mind for millions of students and families today… particularly with what we’re seeing with student loan debt,” Silverman said of the college versus code school debate. “A college education is more important than ever,” he continued. “College degree earners are two times as likely not to be unemployed… and as the economy is getting more and more sophisticated, we believe that students and families need more education, not less… there’s a really important place for it in society today.”

Not only do students need technical, hard-skills, but the soft skills associated with a college education are important, too.

“Just educating students on technical skills alone will set us up for more challenging times in the future,” Silverman said.

For more on the company, check out this PBS report.