To accompany the launch of the latest Gear VR, the Oculus team has rebuilt Home from the ground-up for mobile. The latest version is a doozy, with 3x faster load times and a number of new features and optimizations that bring the experience closer to that of desktop.

If things feel a lot more like the experience on the Rift, it’s because Oculus has taken advantage of the new design’s speediness to double the resolution of Home. The jump is one from SD to HD and works miracles when it comes to text readability, allowing Oculus to begin pursuing some more text-heavy initiatives like including the first build of its WebVR-powered mobile browser in the latest update.

The Oculus Browser is still a work in progress but it allows users the ability to quickly explore the web and dive into 360-degree optimized experiences. As expected, the keyboard isn’t exactly a dream to type on but once you get to your destination, the experience of navigating a site gets a lot smoother, especially thanks to the new remote, which allows for a more speedy selection tool than gaze-based movements. 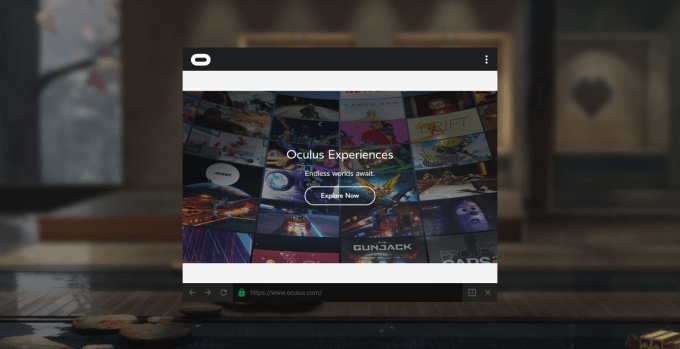 Oculus is putting major effort into reducing the friction of finding new content, with a new feature it calls Oculus Explore. The tab, which dominates the central window of the home screen, gives users an easier way to find new videos and experiences to download.

Other Rift-only software features are migrating over to Home on Gear VR with the new update; Oculus Avatars, which allows users to heavily customize a funkadelic futuristic avatar to use in a variety of titles including Oculus Rooms, Hulu, vTime and others, has made it to mobile. The system works much like it does on the Rift, though without Touch, things understandably feel quite a bit more constrained.

All of this comes as Oculus continues to build up its library of titles; the company’s VR store now boasts 700+ titles in its library with 20 launching next month that boast support for the new Gear VR controller.