Facebook has finally capped off its strategy of cloning Snapchat’s USP by slotting a camera-first, ephemeral multimedia sharing feature into its entire social sharing estate.

Today it’s flicked the official switch on a global rollout of the feature in the main Facebook app, where these disappearing Stories are pinned to contacts above the News Feed — thereby making them almost impossible to ignore, especially given their fleeting lifespan.

Earlier this month the social sharing giant added a similar visual sharing feature to its Messenger app — triggering complaints that it was messing with the user experience.

It did the same, in February, with its messaging platform, WhatsApp, and also annoyed users by trying to replace a text status feature (which it’s since restored).

The Facebook Snapchat cloning strategy kicked off in August 2016 when the company debuted the disappearing Stories format on its photo and video sharing platform Instagram, clearly the most natural home for the clone.

And Instagram Stories has since apparently managed to dent Snapchat’s growth, which was clearly a core strategic aim for Facebook.

That and creating vastly more video inventory across Facebook’s portfolio of social apps — into which it can inject more lucrative video ads.

Training users to share the kind of content where ads can natively blend is really what Stories is all about.

All video, all video ads

None of this should be surprising. The company has previously publicly suggested its entire platform will be “all video” in the coming years.

It’s also taken user-hostile design decisions such as removing the ability to send text messages from its main Facebook app. (And the aforementioned attempted rubbing out of text statuses in WhatsApp).

So, basically, if you want to spam all your Facebook friends with a video of yourself wearing an animal selfie lens, Facebook will happily put all its tech at your disposal. But if you wish to swap a few words with people in your Facebook network, Facebook actively discourages that by requiring you switch to its Messenger app to do so. It’s very clear where the company’s priorities lie.

Yet it remains to be seen whether Facebook users in general are going to be flocking in droves to engage in the kind of throwaway visual sharing Stories encourages — with the format effectively asking them to repackage private lives into what amounts to a self-promoting public ‘ad format’, complete with stickers, silly effects and so on.

Thing is, for several years Facebook has had a problem with users posting fewer personal updates. This too is not surprising, given the network has something of an identity crisis these days. It’s certainly a far cry from the original concept of linking university friends across a campus.

Instagram is obviously the more natural home for people with a love of visual sharing generally (including those who want to build public followings for what they share). While WhatsApp/Messenger are for communicating privately with friends and/or in more bounded groups. So the question arises, who is Facebook for?

The people in the average Facebook network may well include a number of uni friends but also various family members, workmates across different jobs, folks you once met at a party, friends of friends, old school friends, professional connections and even random strangers.

Such an assortment of ‘connections’ likely does not constitute either a close-knit group of friends nor a unified group of people with shared interests. The only loosely linking factor is they all (maybe) met you at least once in your life.

Nor are Facebook friends likely to be a uniformly active network. I see huge variation in terms of content sharing in my own network, for example.

It will undoubtedly take a certain type of person to want to blanket broadcast Stories across such a varied and variously segmented network. (Stories can be shared with specific Facebook friends only, but the default push for the format is clearly to encourage sharing with all.)

Anecdotally, a very small subset of my own Facebook connections also appear to account for the vast majority of personal updates still being shared. (Doubtless exacerbated by the algorithmic effect of the Facebook News Feed promoting posts that get more engagement).

But the handful of users I see who are still regularly sharing personal stuff on Facebook appear to be doing so either to spark debate on a particular issue/topic; to entertain and/or garner public attention/likes; or to ask for (and in so doing share) information/advice with a group — functions that all feel secondary as far as Stories is concerned, given the emphasis here is squarely on visual entertainment.

I may be wrong but it’s very hard to imagine serious or substantial topics being debated via Stories, what with all the selfie lenses, movie masks, and visual effects Facebook is touting… 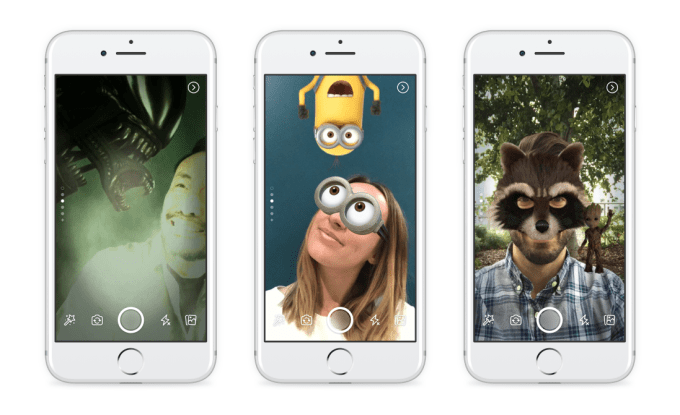 Stories can also be posted to the Facebook News Feed. So there is at least the possibility that someone could use the format to try to garner comments in the usual way, by turning it into a standard piece of public Facebook content.

But I can’t imagine how such a promotional format could sensitively touch on some of the topics I’ve seen discussed across Facebook in recent years, including very difficult issues like child abuse, depression and marriage breakdown. A selfie lens really isn’t going to fit.