Today, the Oculus Rift turns one. 🎂🎂🎂

The virtual reality system very well may have been the most important consumer gadget to be released last year, and for all the critiques and praise that have pushed it through 2016, it’s clear we’re still looking at a technology that hasn’t scratched its fullest potential.

For better or worse, Facebook’s Oculus has been the poster boy for VR and will likely continue to be. The Kickstarter-backed company sent ripples through tech communities in 2014 when it was announced that Facebook would be acquiring it for $2 billion. It hasn’t exactly been smooth sailing since then: The company has filled Facebook’s year with a disproportionate amount of bad press that will undoubtedly provide a nice background to whichever David Fincher film eventually chronicles the rise of Oculus VR. 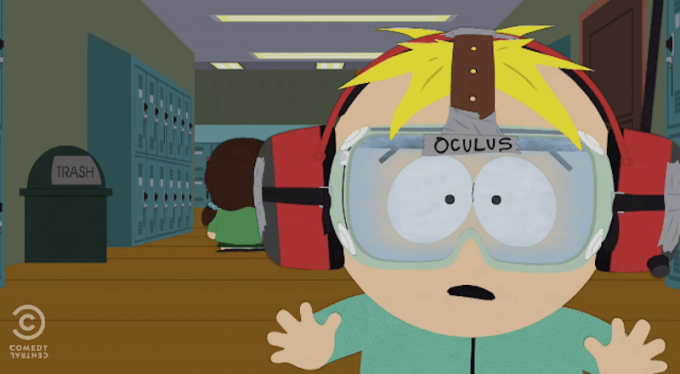 Despite all this trouble, in Facebook’s wake nearly every tech company out there has had to consider its strategy for the new medium moving forward. Headsets and prototypes have been released by companies like Google, Samsung, Sony, HTC, Intel, LG, Qualcomm and others. Startups of Oculus-esque beginnings are no longer the ones holding the keys to where the industry moves; it is the tech giants who control desktop, mobile and the platforms that enable them.

Even in a space with such undefined paths to ubiquity, Facebook is still positioned most effectively to lead. The company has made strides in fostering a robust community of VR developers while also selling consumers on its headsets which have managed to become the gold standards in quality. 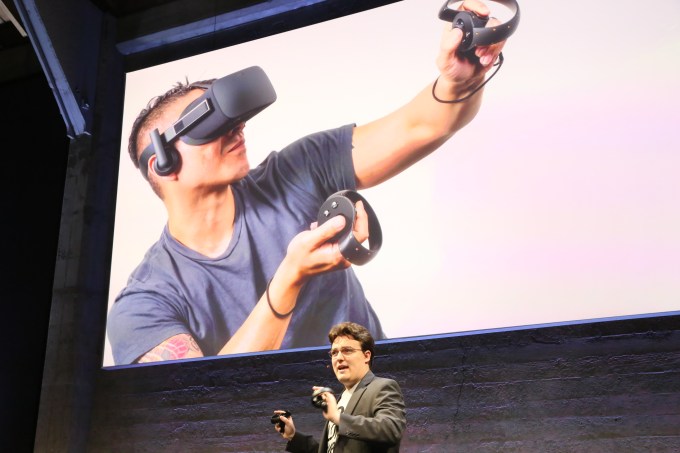 Facebook made its own significant plays this year outside of its Oculus vehicle. The company’s emphasis on building tools to foster 360-degree video were noticeable and highly present in user news feeds. Meanwhile, the company has begun heavy efforts independently of Oculus to define what social interaction looks like on early virtual reality systems.

Facebook’s nearly 2 billion monthly active users are the ultimate key as technologies like WebVR mature which will allow desktop and mobile experiences to seamlessly morph into virtual reality moments.

For a massive company that shows surprising agility in its feature updates, Oculus offers the company a distant end game to build toward. 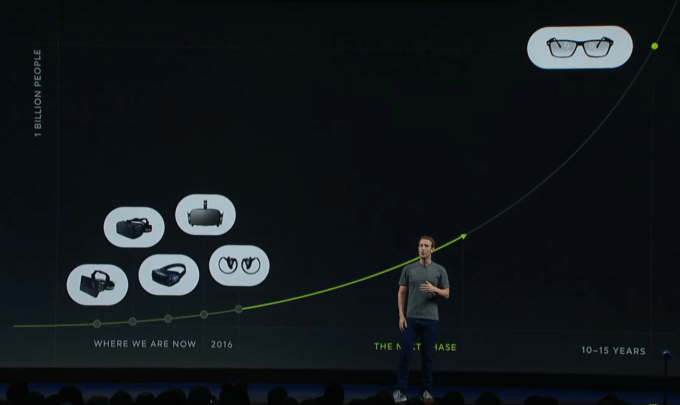 In the most recent earnings call (FB’s market cap currently stands just below $410 billion by the way), Zuckerberg said that ubiquitous virtual reality is still quite a ways off, and seemed pretty adamant that the industry was about 10 years away from its moment in the sun.

“I don’t think there really is a strategy to pull this in from ten years to five, I just think it’s going to be a ten year thing,” Zuck told investors, noting, “I would ask for the patience of the investor community because we’re going to invest a lot in this and it’s not going to make a return or be profitable for us for quite a while.”

Zuck is counting on the gamble being worth the effort in the long term. The company has already spent several billion dollars on the venture, and expects to spent at least another $3 billion, though if history is any guide it’s going to cost a whole lot more.

As more resources get devoted to the VR efforts of Oculus, expect to see the relationship grow tighter between parent company and child. With Facebook’s new VP of VR Hugo Barra starting work soon, Facebook will likely soon grow to absorb the non-gaming applications of virtual reality while steering Oculus in a more hands-on capacity towards its more imminent social aspirations.

The distinct separation that once existed between Facebook and Oculus is already blurring as the social giant grows more willing to align its core brand with its VR moonshot. The company introduced an app earlier this month to host its 360-degree videos on the Gear VR mobile platform.

The most important task for Facebook in 2017 is continuing to build the developer ecosystem for the Rift on the gaming front. Facebook still bears sizable responsibility for funding the game developers that are building some of the most engaging content on the platform.

For Facebook these investments aren’t optional pursuits. AAA game studios won’t develop for a platform that isn’t in plenty of people’s hands. Though Oculus has yet to release sales numbers, most estimates pin Rift sales between 200-400 thousand, which is undoubtedly a tiny market to present to developers who’d likely rather cash in on the 75 million+ Xbox One and PS4 units out in the wild. (Samsung’s Gear VR, which operates on Oculus technology, has sold about 5 million units)

At the Oculus Developer Conference, Zuckerberg announced that the company had invested nearly $250 million in content developers with another quarter-billion on the way. This money is necessary to “seed the ecosystem,” he said in the latest quarterly earnings call.

Oculus isn’t the only major company attempting to build out its influence in the industry. Sony has already sold nearly 1 million PlayStation VR headsets, and HTC is investing heavily in diverse areas of the industry as a part of its Vive headset ecosystem. Google’s efforts with its Daydream VR platform present an obvious challenge to Oculus on the mobile front, while unannounced ambitions from tech hardware titans like Apple could present themselves at any time.

While many see social VR as a key area of advantage for Oculus thanks to mother FB, it is unclear how far VR gaming will move beyond its gaming roots in the next year.

In the meantime, Facebook is rapidly chipping away at some of the less philosophical shortcomings of current VR. Oculus slashed the prices of its Rift headset and Touch controllers by $100 each earlier this month and has been making steady software improvements to its platform that are driving gaming PC minimum requirements lower. Oculus is also working on a product that will remove the wires and gaming PC entirely, “Santa Cruz” is a prototype standalone headset that the company plans to continue refining.

While high-priced hardware and clunky tethered peripherals may hinder current products from reaching wider audiences, the sheer concept of VR is far from an easy sell to mainstream consumers that are skeptical of strapping a device to their face that cuts them off from the outside world.

For Facebook, creating industry-standard hardware may be the easiest challenge they have. The real task is getting a world of users to let go of their skepticism and give VR a shot. Oculus may have had a rougher start with the first iteration of the Rift than many would have hoped, but Facebook is still showing a surprisingly level-headed vision for a technology whose final form still dwells beyond the horizon.