Lyft is looking at one of its biggest potential opportunities to make up some ground on its rival Uber, given the latter company’s ongoing and worsening PR crisis. So it makes sense that Lyft would go even further in the opposite direction, with a new program that lets riders top off their fare to the nearest dollar, and donate the difference to one of a group of selected charities.

The new feature is reminiscent of another recent ‘light side ridesharing alternative’ move by Lyft, namely its decision to commit $1 million in donations to the ACLU over the next four years, as a response to Donald Trump’s initial Muslim immigration ban. Lyft’s new program is in line with its founding principles, the company says, and not tied to any behavior by the competition, but it’s definitely a contrasting image given the circumstances.

Lyft will be rolling out the program, which it calls ‘Round Up & Donate’ as a test at first, gradually making its way to users over the next few weeks. The feature works with an opt-in for those who are selected to participate, and it’ll then automatically round up the fare for your current trip to the nearest whole dollar, with the excess going to charity. So if your ride costs $9.67, for instance, the additional 33 cents will go to the chosen charity. 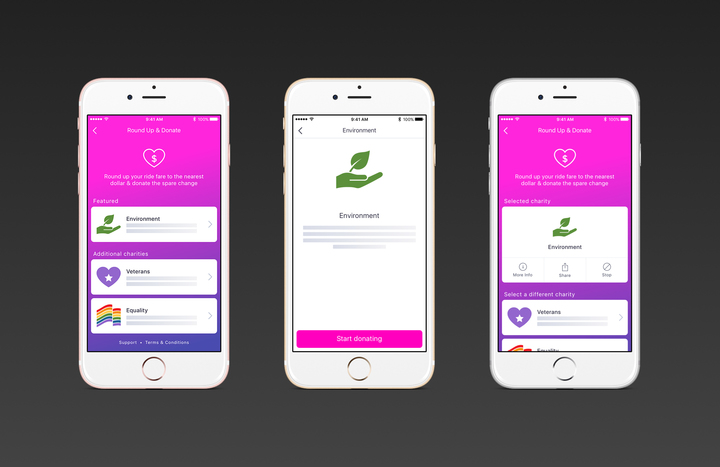 This is reminiscent of those charitable campaigns run by retail stores that ask you to add on a dollar or set amount to your bill to make a donation, as well as AmazonSmile, which gives 0.5 percent of every purchase you make on Amazon to a charity of your choosing if you use smile.amazon.com instead of amazon.com. The charitable donation is all sourced from the rider, of course, but Lyft’s contribution is providing the infrastructure and taking out all the friction, which is no small addition to the process.

There’s alway been a vague good ‘dark side/light side of the Force’ narrative in the ongoing battle for ride-sharing supremacy between Uber and Lyft, but Lyft’s definitely trying to play up the disparity with its recent strategy decisions. Still, can’t knock a move that should end up doing some real work in terms of generating funds for good causes.