There’s really not much difference between political canvassing and the door-to-door sales pitch. Startup Polis is leveraging its campaign experience to help large companies woo customers with that personal touch that can mean so much.

The American consumer has come a long way since the days of Willie Loman and the door-to-door sales pitch, but despite all of the online and retail options, for the company’s founder, Kendall Tucker, nothing beats the knock on the door.

Tucker first got involved in campaigning during the 2008 presidential (she won’t say for who) and then worked for state representatives.

“My favorite part of campaigns was door-to-door outreach,” Tucker says. “With the right data and planning, door-to-door outreach is like building a sales funnel. If a campaign’s win number is 6,000 they need to knock on 35,000 doors because they’ll have 7,000 conversations and they will convince 6,000 people to support them.”

But gone are the days when campaigns would knock on any door. These days, political campaigns use analytics to target the likely voters who may be home at the time canvassers are out and would be receptive to the political message.

“When I was running campaigns, the technology supporting door-to-door outreach was archaic,” Tucker wrote to me in an email. “I had to build routes by hand for each of my canvassers. This process took me two to four hours a day and did not give me any oversight into what my canvassers were doing.” 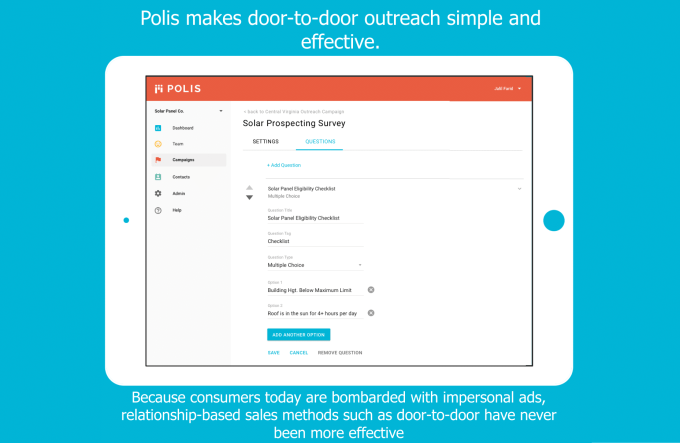 The company is initially focusing on industries like home security, solar energy, telecommunications and insurance.

But unlike the Ned Ryersons of the world, Polis’ reps only typically come when they know they’re wanted. Using information culled from online sources or searches, Polis employees will only come and knock on a door if someone has been looking for services that Polis reps can pitch, says Tucker. 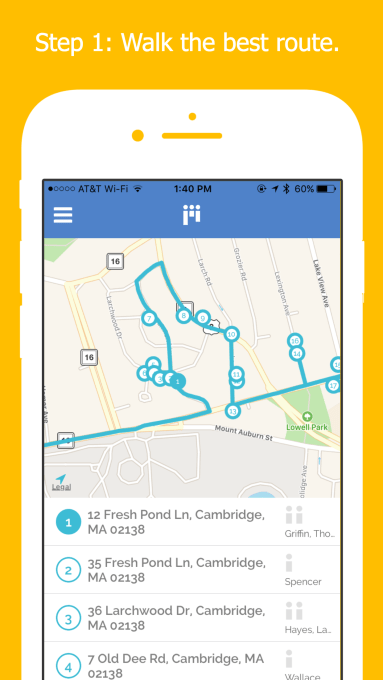 The app also provides data on each home along the route, so a company’s hype person can tailor their approach and pitch to the individual homeowner rather than reading from a script.

And despite the myth of the door-slamming homeowner or the vicious attack dog in the yard, Tucker thinks most people are receptive to the in-person sales pitch (this sounds like my nightmare).

Tucker’s app has already been field tested in the political world where success is most definitely a zero-sum game and has yielded strong enough results that encouraged her to pursue the idea as a business.

“We tested the app on 7 campaigns at the end of 2015 and they all won their elections by more than 20-percent,” Tucker writes.

Then, in 2016, the company knocked on over three million doors in various political campaigns.

Customers were so persuaded by the Polis value proposition that the company was able to ink its first customer (with an undisclosed security company) despite the app still being focused on political use-cases.

Investors are also signing up after hearing the pitch. The company recently closed a $1.3 million seed round from investors including Techstars, and the Boston-based angel investor Chris Jenny.

And Tucker is firmly convinced that the personal touch works.

“I train door-to-door sales reps and political canvassers fairly often and the new ones are always nervous. What I tell them is that 99 times out of 100, people will be nice when they see you at the door,” she says. “It’s easy to be rude over email or on the phone, but when you look someone in the eye and realize they care about something enough to knock on your door, it’s difficult to be rude. I’ve knocked thousands of doors in my life and I’d much rather do that on any given day than make cold calls or send emails.”