There are still a lot of unknowns in the medical world when it comes to pregnancy — including which factors lead to carrying a healthy fetus to term. That’s why WebMD and Scripps Translational Science Institute (STSI) have launched a new investigative study via WebMD’s newly redesigned pregnancy app and are teaming up with Apple’s ResearchKit to recruit participants to look at what contributes to a healthy pregnancy. 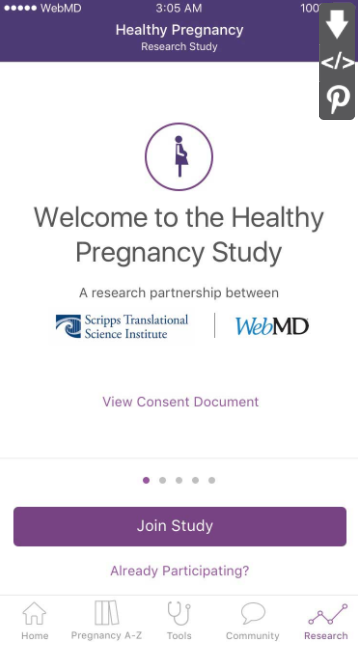 According to the CDC, more than 65,000 women have severe pregnancy complications each year. On top of that, the rate of pregnancy-related deaths has shot up 27 percent in the United States during the last 25 years — yet pregnant women are “one of the least studied populations in medical research,” as STSI’s director Dr. Eric Topol says.

WebMD’s app will ask participants in the study to share information about their medications, vaccinations received, any pre-existing conditions, blood pressure and weight change, any pregnancy diagnosis, as well as childbirth location and other details throughout their pregnancy — all via smartphone.

WebMD claims more than 1.5 million users on the pregnancy app and the company’s medical editor, Dr. Hansa Bhargava, believes incorporating the study within the app will help in gathering data from a solid base of pregnant women.

“Ultimately, this will help moms have healthy pregnancies and have healthier babies,” Bhargava said.