Mass Effect is a video game series that attracts ardent fans and invokes emotional reactions from those fans via its storytelling decisions. The franchise builds on the legacy BioWare built with its stewardship of the Star Wars universe with the Knights of the Old Republic, but offers truly unique science-fiction storytelling in expansive action RPG games that feature as much dialog as they do running and gunning. Mass Effect: Andromeda is no exception in that regard, but it feels different from what has come before, to mixed effect.

First, let me clarify that this is not a proper review, but impressions shared based on more than 50 hours of gameplay, which, according to the in-game reporting tool, still means I’ve completed less than 40 percent of the game. This is a VERY big game. It has the typical trademark BioWare tendency to lead you off onto side quests that crop up just when you think you’re going to focus on the main plot, which is a big part of its appeal. And the side quests in no way feel rote or paint-by-numbers — each is unique, and you can tell attention has been paid to the writing and dialogue in each case, too.

As with most BioWare games, the quests and side quests, and the storytelling involved in each, and in the universe and lore in general, is what’s special about this game. The tale jumps off from the main Mass Effect narrative that existed previously very well, managing to rejuvenate the series without discounting the closure writers of the last installment built into that game’s plot. It’s a new mission, complete with a new galaxy, but with set dressing and faces you’ll find familiar. 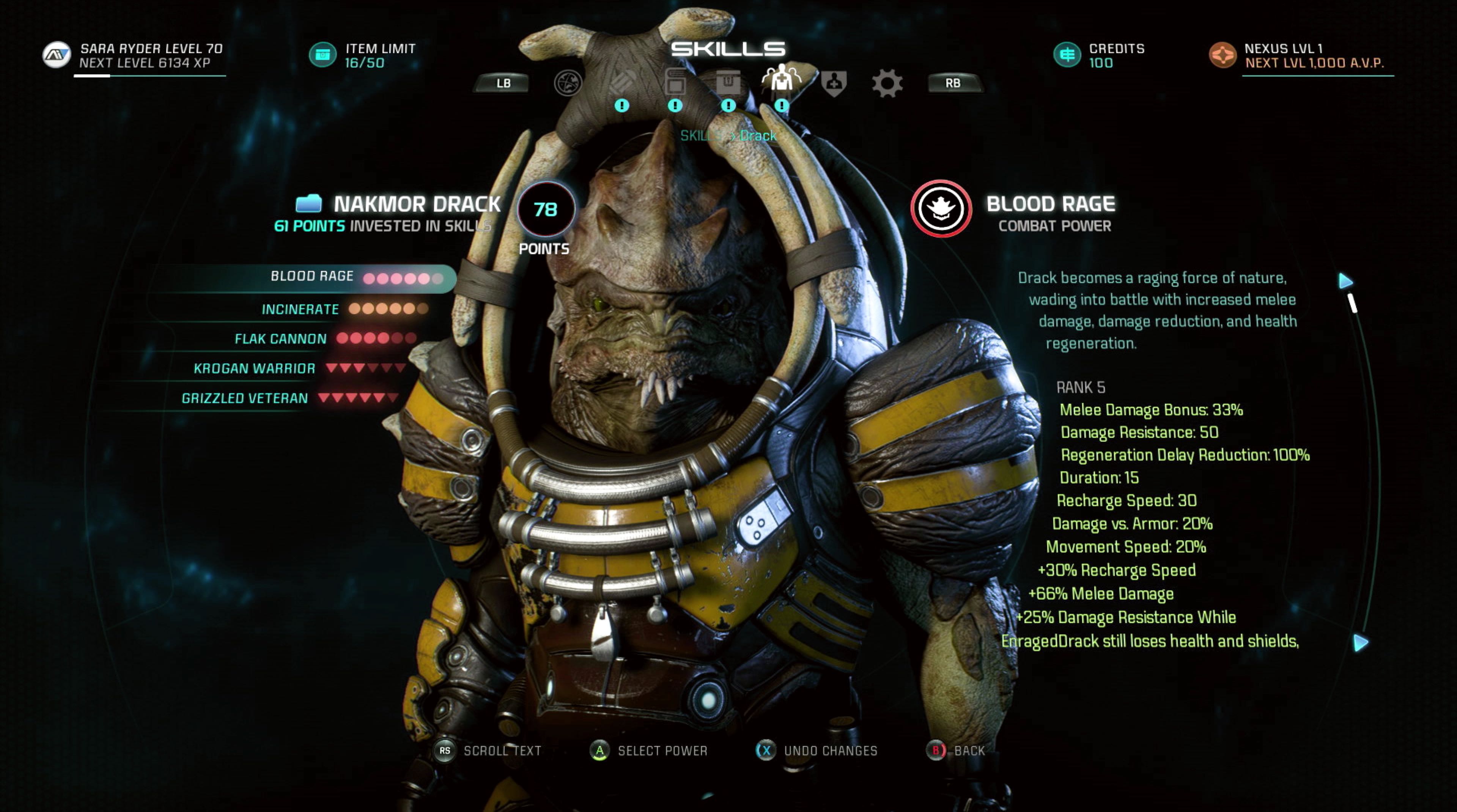 Unfortunately, as a result, the story takes a little warming up to in the beginning. Mass Effect fans won’t find the instantaneous character touch points they’re used to from the existing series, and those new to the series don’t necessarily get enough character development or background to ensure they really care about the people they’re meeting for the first time. It’s like they were looking to trade on universe familiarity, and stake out a strong new beginning at the same time, but fell somewhere in the middle.

Part of the issue with feeling a real connection with the story at the outset in Mass Effect: Andromeda could be some of its issues with cutscene graphics; the faces of the characters look decidedly wooden, and this is especially true because of the game’s release proximity to this year’s stunning breakout success, Horizon: Zero Dawn. I’ve been playing on PlayStation 4 Pro, but the graphics just result in characters feeling flat and two-dimensional, regardless of the merits of the writing.

These initial stumbles may sound like mortal sins, but they end up not detracting too much from the game’s overall impact and play value. The story is actually compelling and interesting, with real emotional effect that develops over time. Pacing could be better; it’s a grand narrative about first contact, exploration and a pioneering spirit that would be amazing compressed into a single story line, but that ends up feeling a bit under scale when compared with the size of the Andromeda galaxy and its substories in a way previous Mass Effect main plots did not. Still, even without having reached the final pay-off, the narrative does manage to maintain your attention and improve over time if you stick with it. 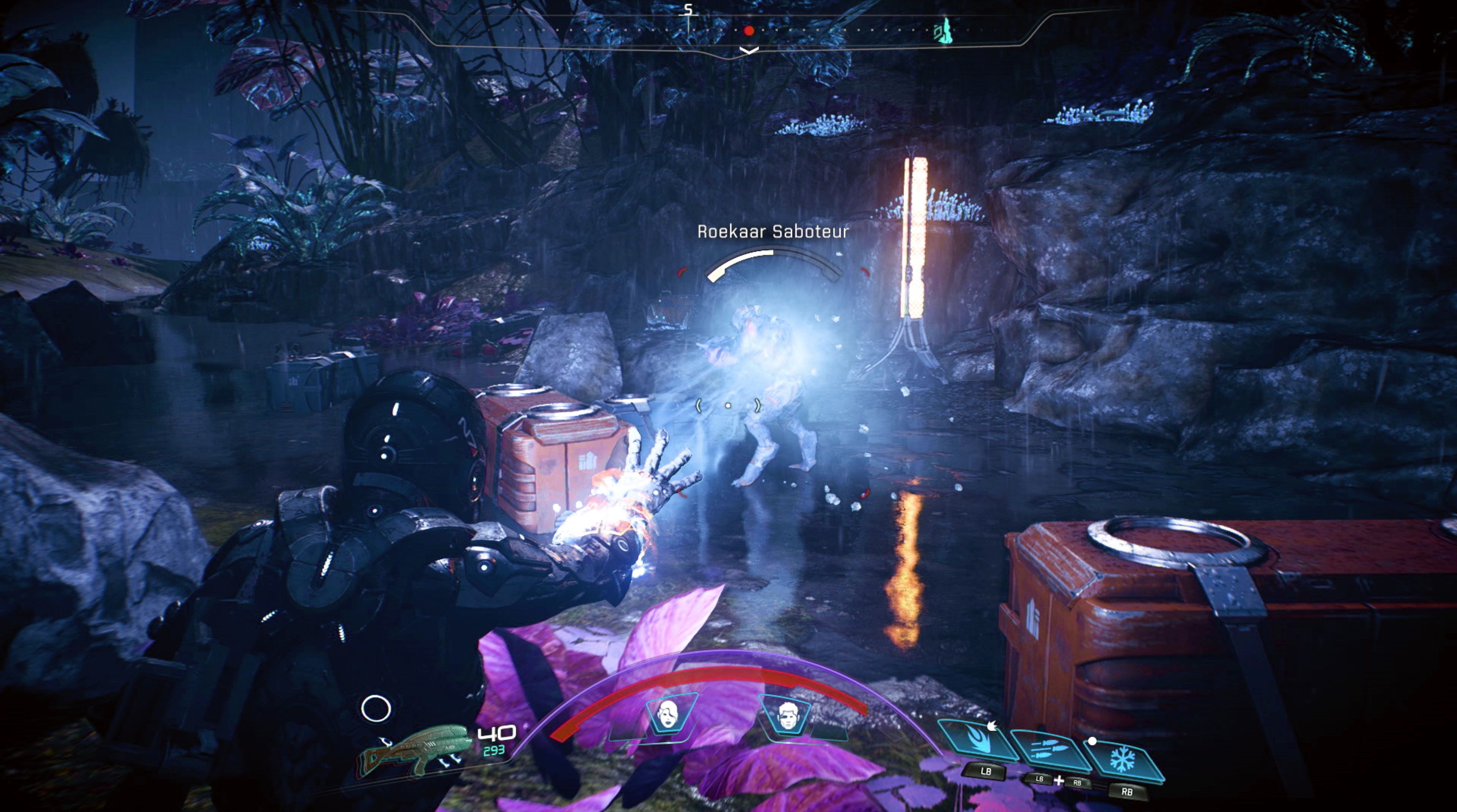 From a gameplay perspective, the in-game combat system is improved, and you can really get a lot of value from mastering the skill and crafting systems. More casual players can also dial down the difficulty and safely ignore these for the most part, dabbling in the RPG aspects with a more surface-level enjoyment that doesn’t detract at all from gameplay. The cover-based shooting mechanics that generally dominate encounters don’t rival those found in dedicated games of the genre, but they’re solidly executed, and never prove anything but fun.

Research and crafting are also key aspects of the game, but these felt a little too fiddly for me, without much in the way of pay-off for the time spent invested. You consistently find good gear via enemy drops and containers spread across the worlds, too, so it’s something that I found wasn’t really additive to the overall experience. Again, if you take the time and really focus, it can have an impact, but in a game where you can spend countless hours even without this element, I wasn’t thrilled at the times I did go out of my way to use it.

Planetary exploration is another aspect of the game that felt at little tacked on: There are the key planets you visit for story progression of course, where you can actually land, but there are many more that are included so you can tick a box by orbiting them and scanning their surface. Scans sometimes reveal element caches useful for crafting, but again, that felt a bit like one relatively useless feature in service of another. 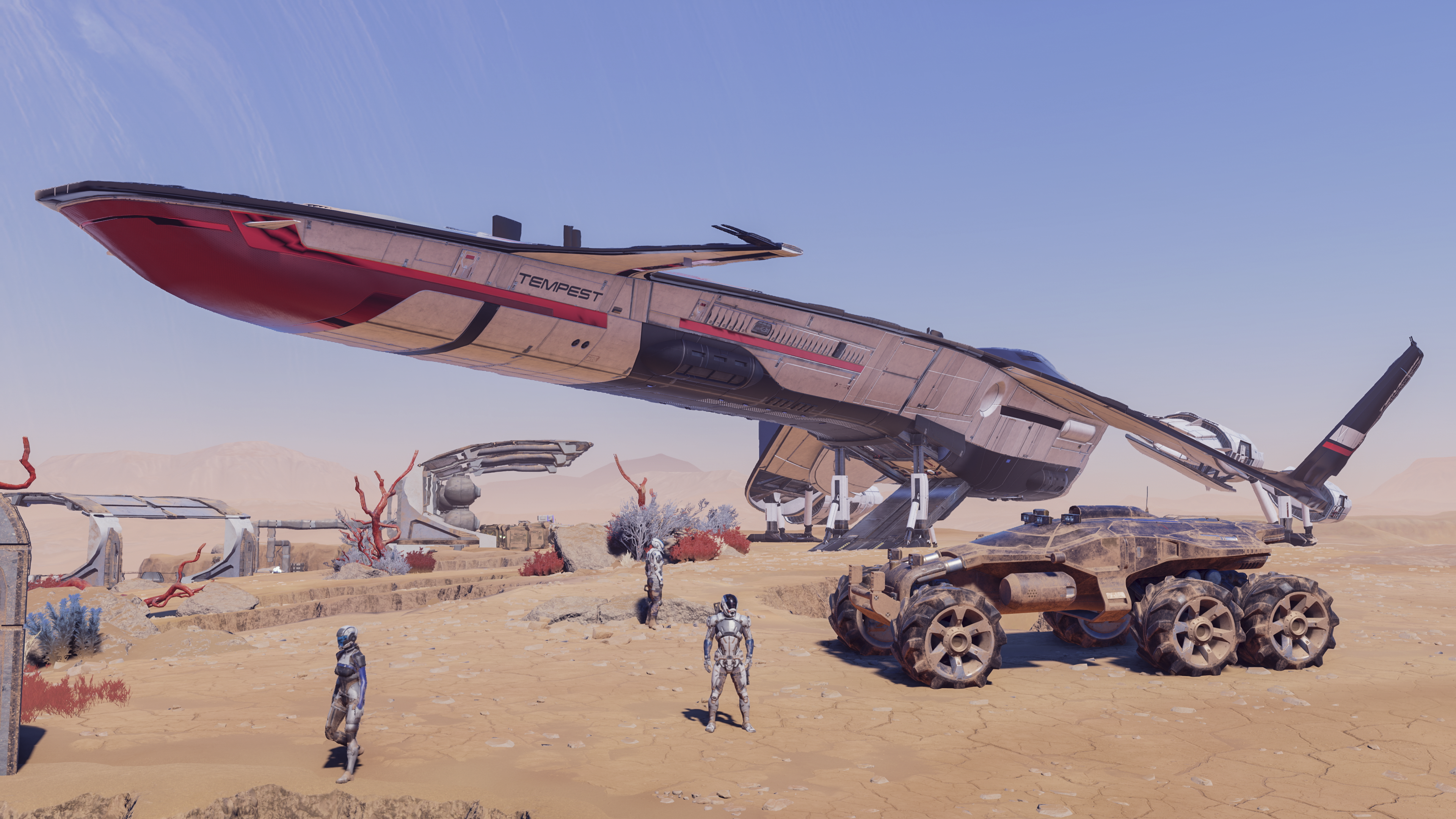 Reading back, I realize that a lot of what I’ve been discussing here makes it sound like I don’t enjoy the game: In fact, I very much do, which is part of why I find myself less than half-finished in time for the embargo on reviews to lift. Mass Effect: Andromeda has the core appeal of other BioWare games, with plenty of engrossing story, dialog and side-missions to keep you occupied. It just also has a lot that feels surplus, leaving a feeling that it could’ve been better with less attention paid to some of those additional features, and more paid to graphics and story pacing.

Mass Effect: Andromeda might also suffer from its launch in close proximity to one of the best big console releases in recent memory: Horizon Zero Dawn. That PS4 exclusive release form Guerrilla Games had a vaguely BioWare feel in its approach to questing and narrative, so it stands to reason it would garner comparisons to Andromeda.

The bottom line is that this new Mass Effect installment still delivers many, many hours of engrossing, enjoyable gameplay — leaving aside the new multiplayer mode, which I haven’t yet been able to sink my teeth into, being primarily a single-player gamer myself. It has plenty to offer fans new and old alike, and sets up the series for new franchise expansion potential.